The Wisconsin Student Climate Action Coalition and a set of other University of Wisconsin organizations marched down State Street Friday evening to demand climate justice and urge the UW System to divest from fossil fuels.

UW student and co-chair of the WSCAC CJ Koepp said while the UW System touts a commitment to sustainability, the Wisconsin Foundation and Alumni Association still has investments going into fossil fuel industries, which make them appear hypocritical, as fossil fuel emissions continue to contribute to climate change.

“UW-Madison is strategically profiting off the destruction of the planet and its people,” Koepp said. “We’ve been talking about this for nearly 10 years, but the WFAA refuses to listen.”

.@BadgerHerald I'm down at Library Mall for the Divestment March and Climate Strike organized by @wscacmadison and other UW and Madison-based orgs. The plan is to march to the WI Capitol to urge the UW System to divest from fossil fuels. Follow this thread for updates. pic.twitter.com/fEvcG8ehHD

Alivia Arredondo, a UW freshman, spoke against the Line 3 pipeline, which would stretch from Alberta, Canada across Ojibwe land in northern Minnesota. Any leakage or spill from that line could contaminate waters and endanger the health of the local people in that area, Arredondo said.

“You know what they say, the bigger the pipeline, the bigger the spill. Guys, we’re already in a climate crisis,” Arredondo said. “Installing line 3 would be a major setback … It’s an infringement on the rights of native people.”

Stop Line 3 activist Tayshia Martineau called in to speak from Camp Migizi, a resistance camp in Cloquet, MN. Martineau described the work of Indigenous women on the frontlines resisting this pipeline and how these women face threats of violence from pipeline workers.

“When these infrastructure projects are built, there’s an increase of violence against indigenous women on the routes along these pipelines,” Martineau said. “These men, these out-of-state workers are the direct threat that indigenous people are taught about growing up.”

Because climate and environmental issues have this racial disparity, Bennett said, climate solutions must also include racial justice and a commitment to equity. 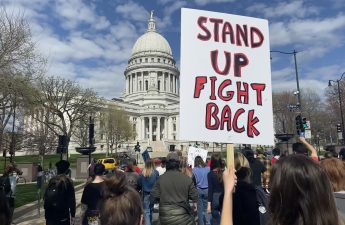 “If there is profit there will never be true help to those who need it because there will always be exploitation,” Loken said.

Lieutenant Governor of Wisconsin and chair of the state task force on climate change Mandela Barnes said the current political situation in Wisconsin makes it difficult to pass climate legislation.

While Wisconsin Governor Tony Evers is a democrat, Barnes said the GOP-controlled legislature consistently opposes climate legislation and gerrymandering keeps many of those GOP legislators in power.

“To achieve justice, we need to demand justice,” Barnes said. “We stand up because we know our children, we know our next generation deserves more … but the fact is we can’t change much until democracy is truly restored.”

The protesters marched down State St. from Library Mall up to the Capitol, where they chanted “Exxon-Mobil, BP, Shell, take your oil and go to hell,” and “Hey, WFAA, how many people did you kill today?” The event ended around 7:30.