If it’s mid-August in Madison, chances are you’ve been graced with the unsightly presence of perfectly good furniture dumped along streets throughout downtown.

To many students at the University of Wisconsin and Madison community members, this day is referred to as Hippie Christmas: A wonderful time of the year when students ceremoniously kick their unwanted belongings to the curb in hopes that a fellow neighbor might find treasure in their trash. 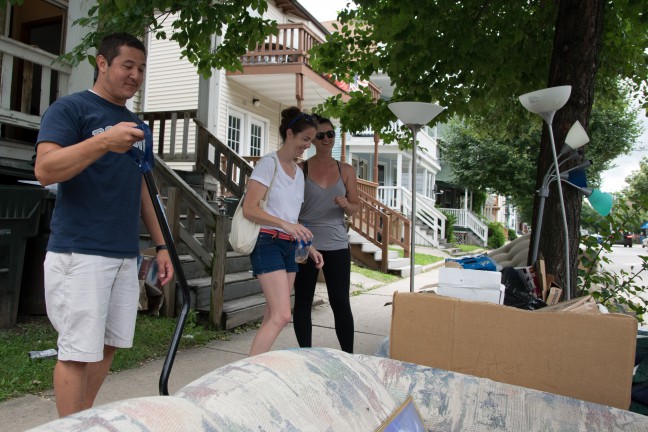 Unfortunately, the problems with the logistics of moving on campus, such as inconvenient leases and the small-loading capacity of most vehicles, seem to be the reasons why moving days have assimilated infamously into Madison’s college culture.

“If there was a volunteer service that came around to come and take this stuff to one of those donation sites, I feel like that would make [the moving] process a little more cohesive,” Nelms said.

Though these types of services are not likely to sweep Mifflin Street anytime soon, UW student’s sustainable mentality is helping shape moving days into a campus phenomenon geared toward helping other students and community members. 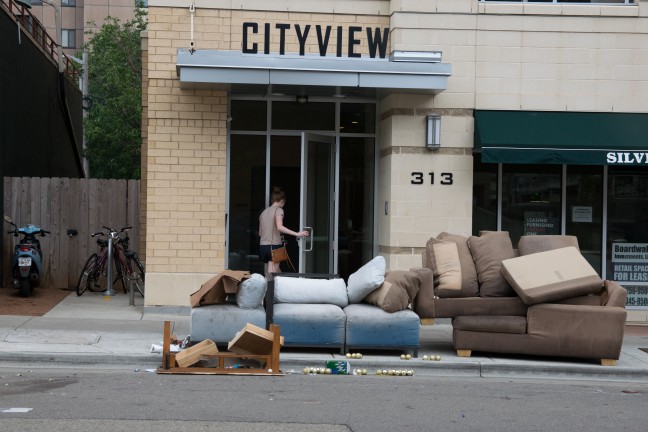 Lack of sustainable efforts by students still seems evident in many residential areas, such as furniture dumped out in front of high-rises instead of taken to donation centers, as shown above.

“The reality of [moving days] is … people literally just dump their shit out here rather than say, ‘oh, this is a couch that is useable,’ where everything that goes to [a donation center] someone might be able to pick up a couch or a chair,” Rossi said. 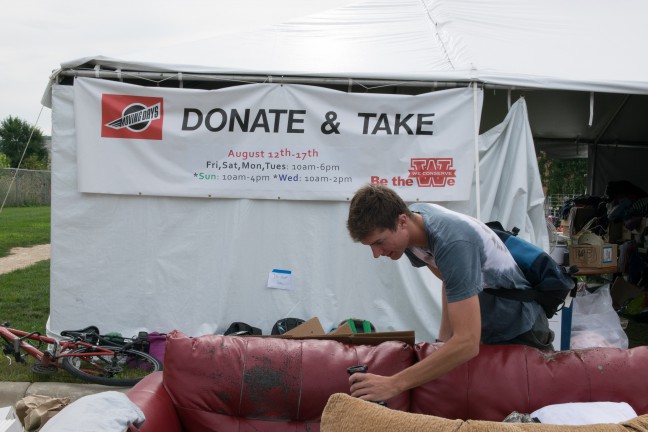 It’s efforts like Donate and Take run by the UW Office of Sustainability that help consolidate donated items in a centralized location on campus for students like senior John Zunker (above).

Anna Ostermeier, a sustainability intern, said there have been an average of 60 people, both students and community members, coming every two hours to take advantage of this immediate exchange of goods on the corner of Dayton Street and Mills Street.

“There was a couple who came by the other day and they got a bed frame for their kid who was sleeping on the floor for however many weeks,” Ostermeier said. “It’s been rewarding to see people find things they actually need.” 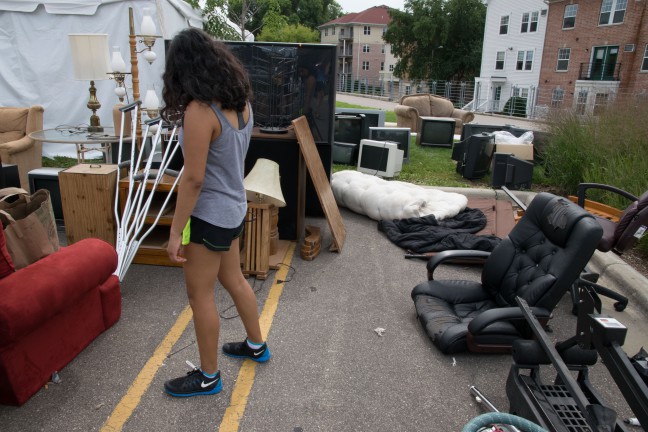 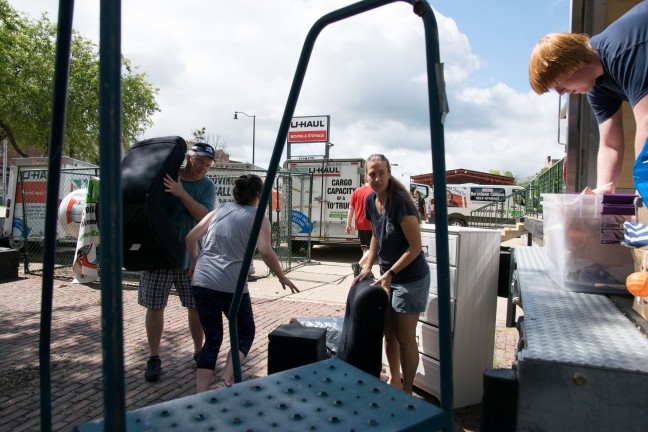 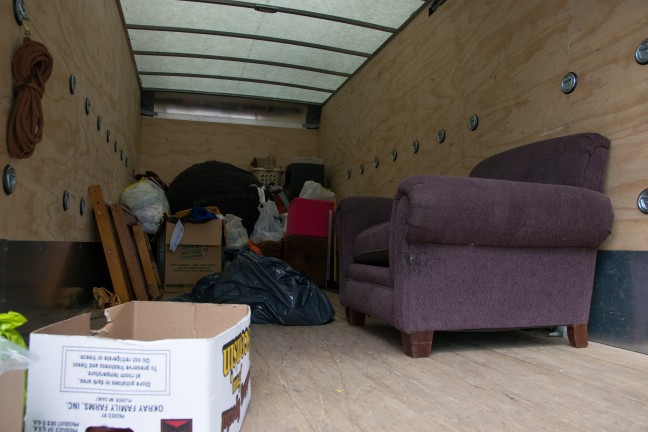 Gently used furniture and clothing are the most common donations collected. Community members in need who are provided vouchers can receive these donated household and clothing items for free. Clothing, no matter the condition, is the most economical because it can be recycled to vendors for money.

St. Vincent’s has, in the past, made an average of $200,000 per year by selling worn-out clothing to vendors, Westfahl said. 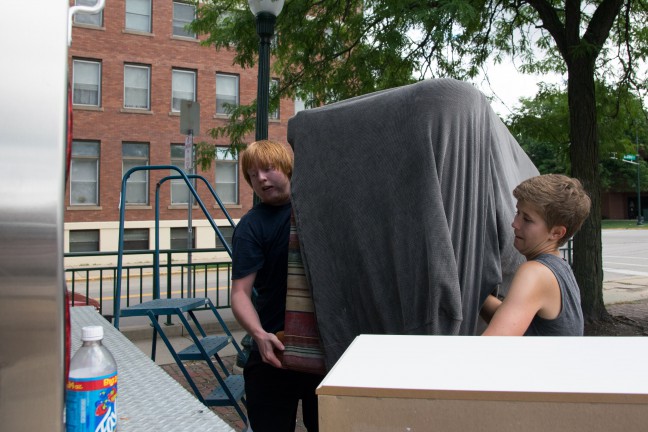 “I know my stuff can benefit other people in need,” Schroeder said. “It’s no good to waste perfectly good furniture by throwing it to the curb and letting it get rained on and not used.” 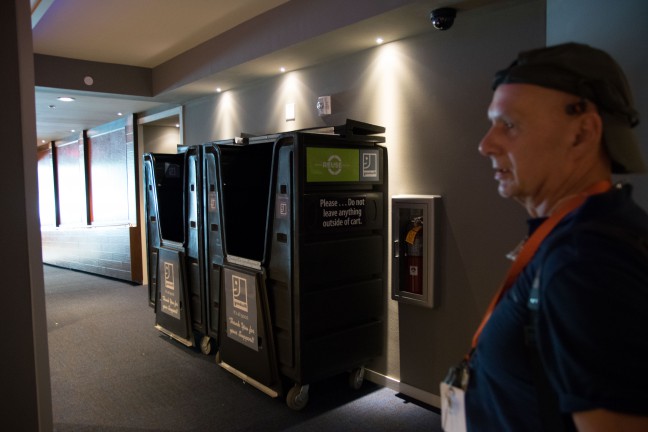 Someone who knows this far too well is Goodwill Partnership and Projects Manager Greg Haglund (right). He explained that one night he watched a couple dump their showroom-quality leather sofa on the curb, and saw it slowly get ruined by the rain.

“I thought, ‘you know that is a horrible mindset’,” Haglund said.

But as someone who has worked with Goodwill for several years, Haglund said he has witnessed UW students’ enthusiasm to donate their items. 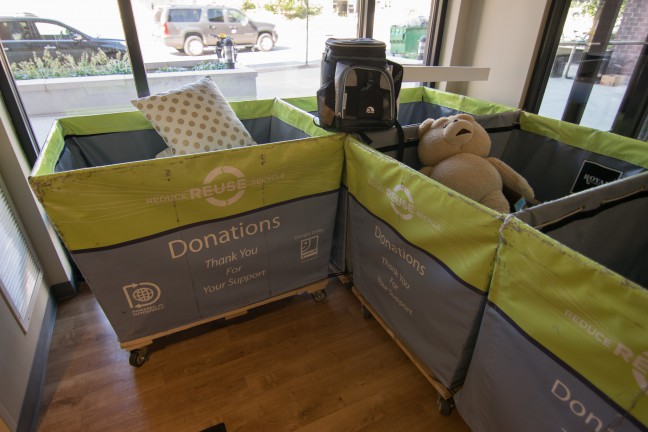 Goodwill now has donation carts in almost all of Madison’s residential high-rises. Haglund said these carts are a great way for property managers to save on costs to haul trash from their establishments.

“Last year, through July and August, for properties in and around campus we picked up 108,000 pounds,” Haglund said. 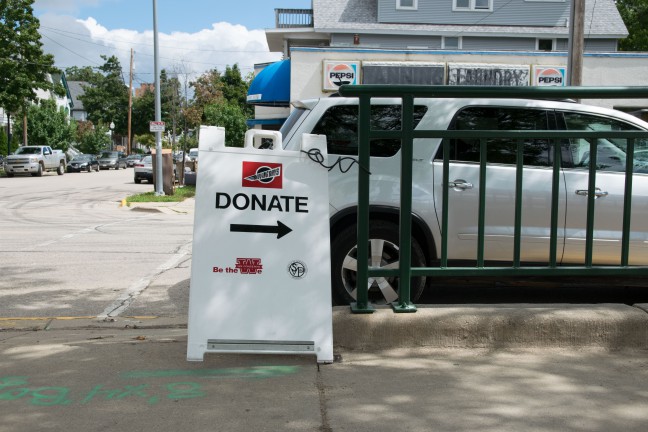 Choosing to donate rather than dump will divert 1.1 million lbs of move-in waste from our city’s landfills, according to WE Conserve.