Candidates and surrogates from both the presidential and senate races came to Madison Tuesday in the hopes of inspiring students to get politically involved in the remaining two weeks before the November elections.

Chelsea Clinton spoke to early voters at the Overture Center on behalf of her mother. Meanwhile, Republican Sen. Ron Johnson met with the University of Wisconsin chapter of College Republicans.

Clinton said she considers this election to be the most important of her lifetime, partly because of her new role as a parent of two children.

“As proud as I am to be my mother’s daughter … my most important opinion now is as my daughter and my son’s mom,” Clinton said. “I know that whomever we elect to succeed President Obama will help shape the future for my children, your children, your grandchildren.”

Clinton’s speech highlighted her mother’s work on women’s rights and what the early days of a Clinton presidency would look like, focused on economics, climate change, immigration and veteran aid.

Later that evening, Priebus and Perdue welcomed Johnson to campus and praised his business-minded perspective in Washington, D.C. Priebus spoke highly of College Republicans at the event, calling them the “backbone of our party.”

“Sometimes you wonder whether people that get elected, especially at that level of the United States Senate, really recognize and understand what the struggles are of grassroots activists and college republicans and party people like me, and [Perdue] does,” Priebus said. “He cares about Ron; he cares about keeping the United State Senate; and that’s not going to happen unless we get Ron reelected.”

Johnson then took the stage to explain how his business perspective influences his political views. He reasserted his support for free-market capitalism and a limited government in his speech. 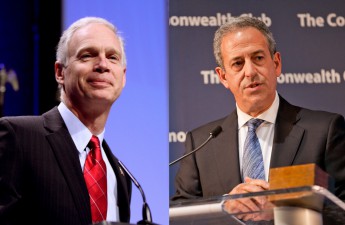 Johnson looked to the Declaration of Independence and Constitution to explain what founding rights he thinks are being threatened in this election.

“The reason you live in such an affluent society is because our founding fathers had the spark of genius to create this limited government,” Johnson said.

Criticizing big government, Johnson said the federal government made higher education less affordable despite its good intentions by “pouring” money into colleges in the form of student loans and grants.

He also said the housing market bubble was created by “bad government policy” and sought an easier way of getting health care to those who need it without changing the entire market system.

Encouraging students to get involved in local door-to-door efforts as the election season winds down, Johnson and Clinton both encouraged people to make the last two weeks count.

“Depending on your perspective, 14 days either might seem quite soon or quite far in the distance,” Clinton said. “I feel both of those things every day. But I know that every moment matters from now to when the polls close on November 8th.”