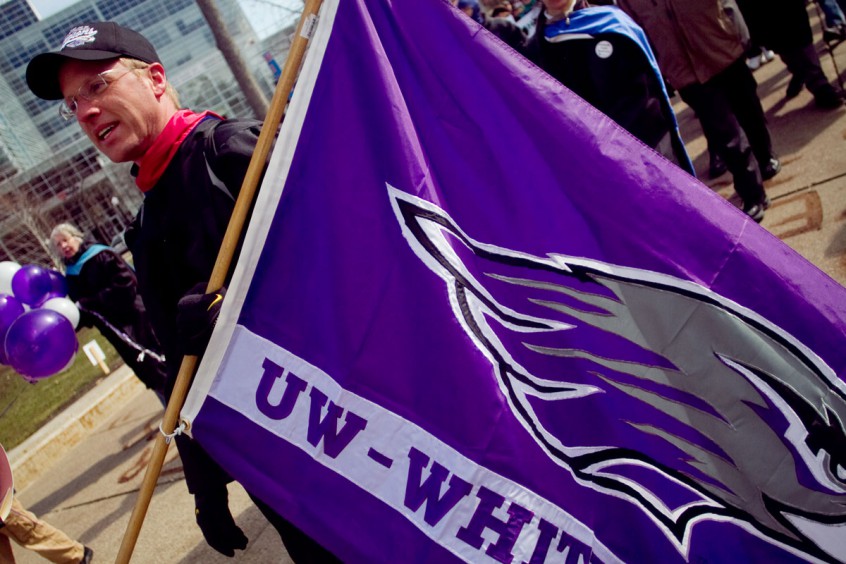 UW-Whitewater Professor Eric Compas carries a flag he brought to Madison after marching to the Capitol from the Whitewater campus. Compas and another UW-W professor both walked the full 43 miles between Whitewater and Madison showing solidarity with labor unions.

The UW System delayed a student free speech survey that in part contributed to the resignation of UW-Whitewater’s interim chancellor.

The survey, which was intended to gauge student perceptions of free speech at their universities, was set to be released Thursday but is now postponed until fall 2022. 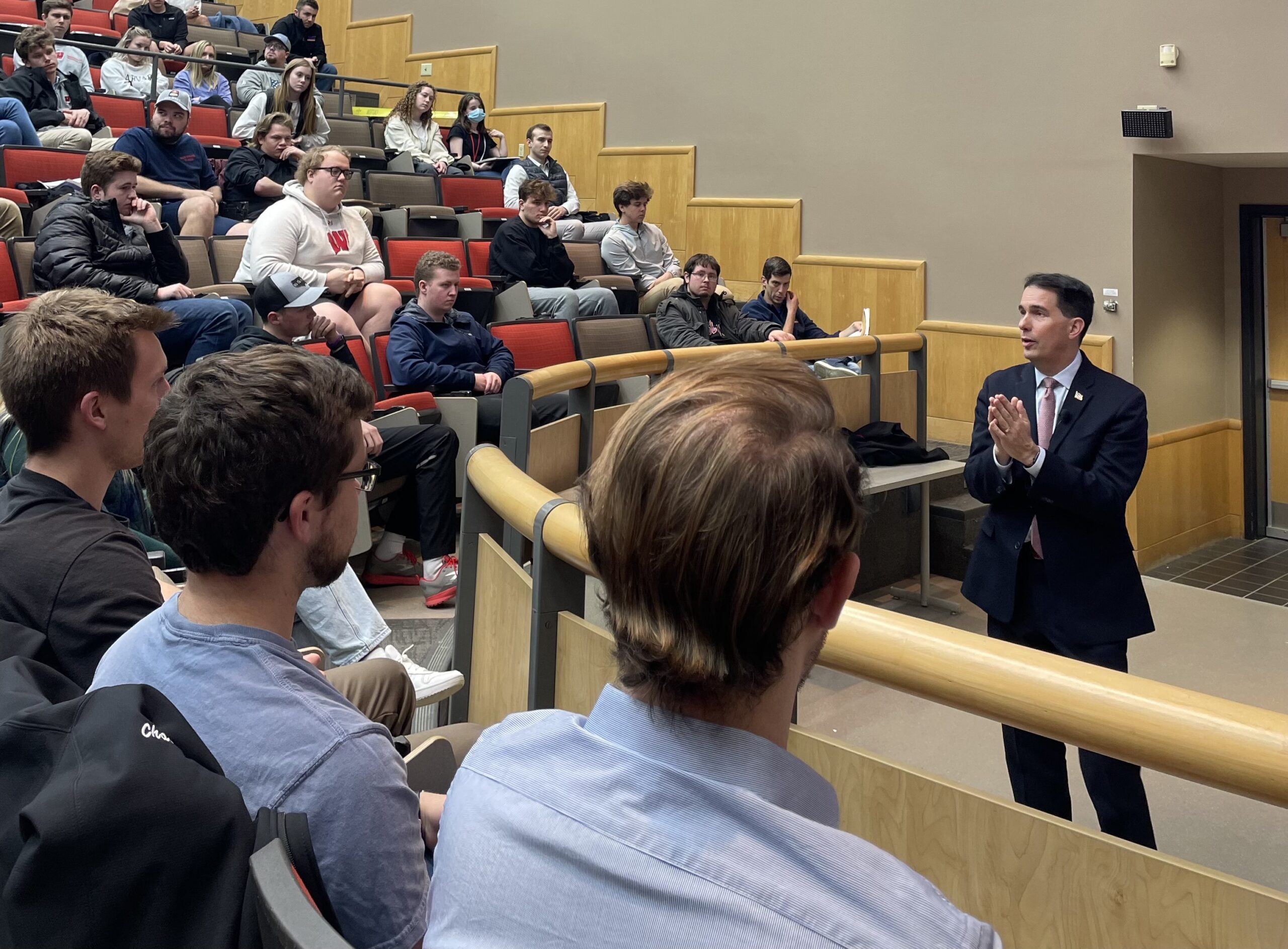 Tim Shiell, director of the Menard Center for the Study of Institutions and Innovation, said in an email to UW System Interim President Michael Falbo Thursday that he postponed the survey because of concerns raised this week ahead of its release.

“The extra time will enable us to answer fully and accurately the avalanche of questions arising and lay the ground work for a successful survey,” Shiell said in the email. “It is essential that the survey provide the quantity and quality of data that helps inform the public discussion of an issue of state and national significance.”

The survey included questions meant to gauge students’ knowledge of the First Amendment, if students see “problems in viewpoint diversity” and if students self-censor themselves on their campuses, according to the UW System’s announcement of the survey. The organization funding the survey — UW-Stout’s Menard Center for Public Policy and Service — has received donations from several GOP mega-donors.

UW-Whitewater Interim Chancellor Jim Henderson told the Wisconsin State Journal that the survey was the latest example of the UW System’s “top-down approach” to leadership. Henderson, who resigned as interim chancellor in part due to the survey, said he did not feel that chancellors were not properly included in the decision-making process.

Falbo changed his mind about whether or not to proceed with the survey three times.

According to the State Journal, Falbo decided the UW System would not participate in the survey after talking to concerned chancellors a few weeks ago, but then he switched course last week following an an email from Shiell that requested a written explanation about why the System would not proceed with the survey.

“As these [free speech] issues flare up, groups representing myriad viewpoints have made often outlandish claims about the System’s failures in this area. They have accused us of stifling conservative speech and encouraging racist speech, and they have voiced a cornucopia of other hyperbolic statements based on idiosyncratic events on a few campuses,” Shiell wrote in the email. “Without this survey, the System will continue to be forced to address future free speech controversies from a purely post hoc and anecdotal perspective.”

In a statement to the Isthmus, Henderson claimed the main reason the UW System was going to move forward with the survey was to avoid political fallout, while other UW System faculty members have taken to Twitter to voice their opinions on the survey.

UW-Eau Claire professor Matt Jewell said in a tweet that the UW System’s decision to move forward on the survey was irrational.

“How many times do we have to say it?” Jewell wrote. “[The UW] System and its campuses *constantly* jump through artificial hoops to ‘avoid political fallout’ at the state level. Then budget time comes and they gash us anyway. There is zero payoff for this constant institutional self-harm.”

Other professors have raised concerns about the survey itself.

In one critique, UW-Madison political science professor Mark Copelovitch said to the Cap Times that the survey asked about students’ feelings rather than policies of universities’ administrations regarding free speech on campus.

“It’s not just the problematic content of this survey,” Copelovitch wrote on Twitter. “The entire project of surveys is to generate ‘data’ on how universities/administrators/faculty are restricting speech to support a predetermined political narrative & a very specific policy agenda.” 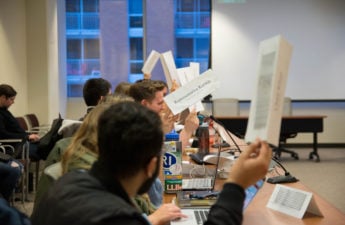 “It’s disappointing that bureaucratic red tape at the system has delayed this survey on free speech,” Vos said in a quote to Meyerhofer. “I believe we have a problem on our campuses and I look forward to seeing the results of the survey after it’s conducted this fall.”

On Wednesday, when the survey was still set for a Thursday release, former Gov. Scott Walker told UW-Madison students they should take the survey and denounced the resignation of Henderson.

“I would encourage you, and anyone you know … let them know that this survey is out, talk about your experiences and answer the survey truthfully,” Walker said to UW-Madison students gathered in Grainger Hall for a College Republicans-hosted meeting.

The survey will go out fall of 2022, despite earlier concerns emphasized by the Menard Center that the funding for the survey would not be available after the spring semester.

“We hope it was made clear that there is no funding in place for the survey beyond this semester,” Shiell said in his email to Falbo last week. “While we certainly value the opinions of the chancellors on this topic, we are concerned their judgements are based on incomplete and perhaps mistaken information regarding the survey.”