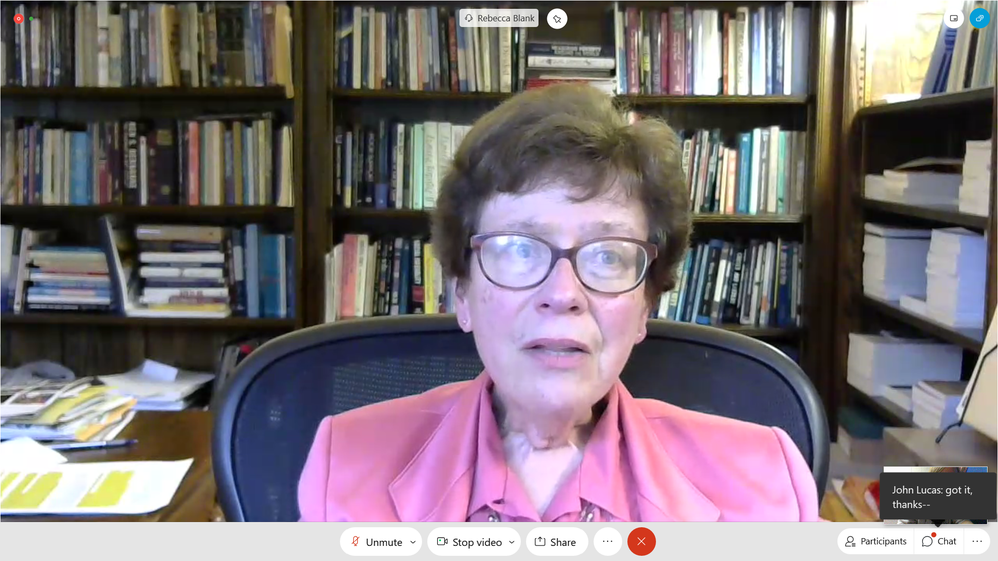 “We’re in the midst of three crises,” University of Wisconsin Chancellor Rebecca Blank told student journalists Tuesday afternoon. “One, of course, is a COVID-19 health crisis. One is a financial crisis, which is a little more slow-moving, but coming at us nonetheless. And the third is the social revolution that has been rolling out over a number of years … and the conversation about racial equity and justices, clearly a major issue for us here on campus.”

Over WebEx, Blank fielded questions relating to everything from UW’s Smart Restart campus reopening plan to the UW BIPOC Coalition’s demands for the University to the upcoming football season and UW’s relationship with Dane County.

Blank said she met with UW BIPOC leaders, including leaders of BIPOC student groups like the Wisconsin Black Student Union and Wunk Sheek, to discuss their needs for the semester.

Recently the UW BIPOC Coalition, a group of student affinity groups made up of students of color, outlined ten demands for the university. Their ten demands include removing the Abe Lincoln statue on Bascom Hill because of his history of white supremacy, defunding UWPD, improving support for marginalized students on campus and more.

“I have read their list of demands, I have talked with [BIPOC student leaders],” Blank said. “There are a number of them that we are working on. Some of them are non-starters and there’s other things that we are gonna try to do, and that’s the nature of the conversations that I hope we’re going to have as we work through whatever the disagreements are.”

Principally, Blank said they will not consider removing the Lincoln statue because she said it provides historical context, and because she believes much of Lincoln’s work has had a beneficial legacy.

“The one thing I’ve told them is that I’m not willing to consider removing the Abe Lincoln Statue,” Blank said. “Abraham Lincoln is probably one of our most honored presidents, he did a number of things that really affected this country, not just the Emancipation Proclamation. And like all people of his time, he did some things that people consider a little less honorable 150 years later and I think the right way to take that into account is to provide some context to his legacy.”

Blank said she feels “disappointed” in ASM’s upcoming vote of no confidence in UWPD.

Blank said while she’s heard from students on campus that they feel unsafe around police in a general sense, she said she hasn’t heard any specific complaints about incidents with UWPD officers, and because of that doesn’t think UWPD should be defunded.

“I have heard students tell me they don’t trust the police, that I should defund them, that they don’t want the police anywhere near them and I understand the reasons that someone may feel that way. That doesn’t mean we don’t need a police force on this campus,” Blank said. “Clearly, to the extent that UWPD can build trust with students of color would be really helpful, but we all know that’s gonna be a slow process.”

Blank also said she feels disappointed ASM and other student groups haven’t attempted to meet with university officials to express their concerns. Before this vote, Blank said ASM only met once with officials on this topic.

Blank said the 65,000 students on campus warrant a police force on campus for protection. ASM Chair Matthew Mitnick said in a statement to The Badger Herald that the student council feels differently.

“[UWPD’s] presence at [racial justice] protests and unwillingness to validate the thoughts of thousands of students have led to this course of action,” Mitnick said. “We hope that this vote will demonstrate to the administration that we see the injustices present in our daily lives.”

Health and safety guided UW’s return to campus, Blank said, followed closely by their desire to continue high-caliber instruction and research. Blank said they chose to hold certain types of classes, like clinical labs, in-person because they couldn’t function properly without them, and more broadly, they chose to hold smaller classes in-person to facilitate better discussions and enhance learning.

Blank said they took low income students into account in their decision to bring students back because they wanted these students, who often don’t have reliable WiFi or the necessary resources, to be able to study on campus.

On the curtails of Witte and Sellery residents getting out of quarantine, Blank addressed the question of residents who went home during this period potentially bringing back COVID-19.

Any student returning to campus from Witte and Sellery will have to show proof of a negative COVID-19 test in order to gain access to the dorms again, Blank said. On campus, they’re using rapid PCR testing to make sure they can get quick turnaround results for tests.

Blank said the University’s choice for opening dorms and having in-person classes “was not a monetary decision” despite some students fighting for a tuition reduction due to the decrease in academic quality that comes with online instruction.

Blank also said she’s noticed the spread of COVID-19 amongst students hasn’t spread much throughout the greater Madison community. 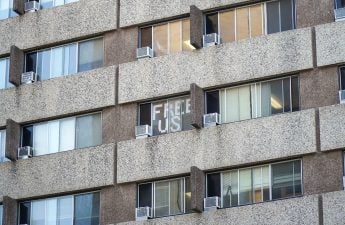 “If you’re reading the Dane County health statements they’ve said that they don’t have much evidence of spread from our students elsewhere in the community, and that’s good news,” Blank said.

On Dane County Executive Joe Parisi’s recent call for UW to close campus, Blank said she feels the relationship UW has with the county has to be a partnership, and “firing messages back and forth” doesn’t do anything for either’s benefit.

Blank said while she doesn’t have much jurisdiction off-campus, there should be a partnership with the city because many students live and move off-campus, and if places like bars and restaurants can operate without sufficient social distancing, then the University cannot control what students do in those areas.

Dane County is making strides in that direction, Blank said, and she appreciates it.

“At the very beginning of the year, a lot of bars opened and violated health protocol and nobody stopped them,” Blank said. “Dane County is now coming in and being much more clear about the protocols with some of those entities and restaurants and bars and that’s very important.”

Blank said the University made the decision to bring back Badger football under the approval of a Big Ten medical advisory group. Blank said every player will get tested every day, and if their test comes back positive, they’ll be out for 21 days. Any player that feels unsafe or doesn’t want to play doesn’t have to. Players that don’t want to play will not lose any scholarships or eligibility, Blank said.

Camp Randall will not have fans this semester, Blank said, and UW will collaborate with MPD to police any potential tailgates or large gatherings on game day. Additionally, the Wisconsin Alumni Association will discourage alums from coming to Madison.

“The Alumni Association is going to be doing a lot of messaging to alums saying, every game is an away game, don’t even think about coming to Madison, there’s no parking lots, there’s no tailgating,” Blank said.

Overall, Blank said while this semester has been anything but conventional, she stands by her decision to bring students back and plans to continue working with student groups to hear their concerns.

Update: This article was updated to reflect the nature of Chancellor Blank’s meeting with BIPOC student leaders (rather than with the BIPOC Coalition directly) and the frequency of COVID-19 tests for football players.