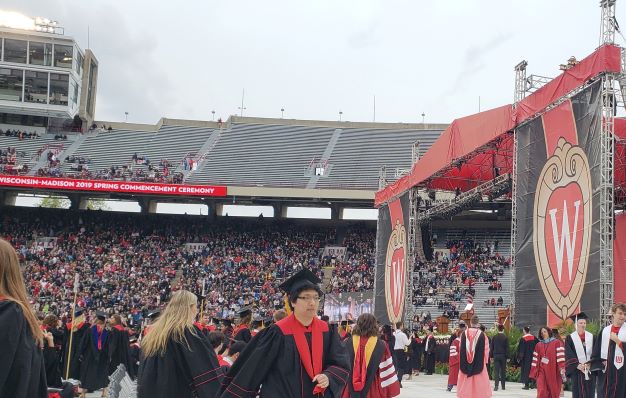 NFL defensive player and University of Wisconsin alumnus J.J. Watt delivered the keynote address to the crowd, describing the four life lessons he learned in following his dream to become a professional football player.

“You should have as big a dream as you want to have,” Watt said. “Don’t let anyone tell you otherwise.”

Watt said that the path to any dream would be fraught with challenges and negativity. He said the most important part when experiencing these challenges was not to let them knock you down, but instead to use them as motivation to get closer to your dreams. 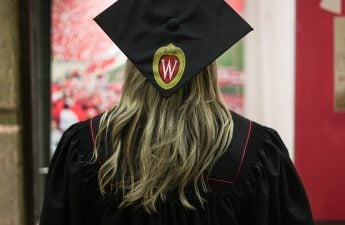 When Watt was drafted by the Houston Texans, he said he’d been booed by the Texan draft party. He’d seen the footage, but instead of letting their jeers get to him, he decided to work hard and prove to the fans he wasn’t deserving of boos.

“You can use negative energy to power your dreams,” Watt said.

Watt spoke about his time as a maintenance worker at Camp Randall stadium, helping paint balconies. He described how he would stay late, long after practices to meet with the defensive coach who shifted him from being a tight end to a defensive player.

He said that while he had to work hard to get to where he was now, he’d also had a lot of help from people around him. Watt recounted a run of injuries he’d had which kept him off of the field for several months and how his girlfriend had supported him.

“On the path to your dreams, you will not do it alone,” Watt said.

Watt also spoke about the importance of helping others towards their own aspirations. He described his charity work. His foundation’s motto, “dream big work hard,” encourages kids to pursue their passions through after school programs. He also dedicates a lot of time and effort to Hurricane Harvey relief. According to Watt, his foundation raised $41 million dollars after Harvey ravaged Texas.

Watt’s final words of advice were to stay committed to a set of goals, but not to lose sight of other accomplishments.

“There is so much more good out there than we realize,” Watt said. “Find those silver linings on your darkest days.” 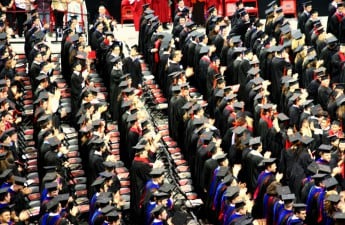 Chancellor Rebecca Blank congratulated all 7,056 graduates in attendance on their accomplishments. She also drew attention to pioneering female alumni including the first female doctorate recipient Mary Kenneth Keller, the first female African-American graduate Mabel Raimey and botany researcher Ethel Allen (from whom the Allen Centennial Gardens got their name). This year demarcated the 150th anniversary of women receiving bachelor’s degrees from UW.

Blank told the graduates to learn how to step outside their comfort zone, like these women did to pursue success.

“Learn to be uncomfortable at times,” Blank said.