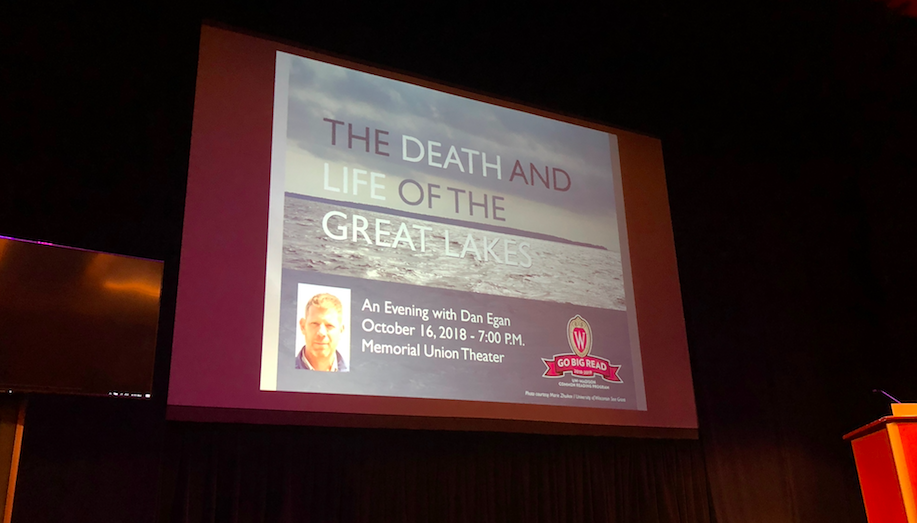 Go Big Read hosted Dan Egan, journalist and author of the campus wide book program’s 2018-2019 selection “The Death and Life of the Great Lakes,” to speak about how humans have impacted the Great Lakes.

Egan’s interest in the Great Lakes began while he was working as a journalist for the Milwaukee Journal Sentinel, when he noticed the salmon in the Lake Michigan harbor were not spawning naturally. Upon further research, he discovered these salmon were raised to be caught and would never spawn.

This information inspired him to look into the full history of how humans have impacted the Great Lakes.

According to Egan, these canals have made the Great Lakes vulnerable to invasive species like the sea lamprey, a parasitic species, which nearly eradicated Lake Michigan’s trout population in 1921.

Invasive species have continued to spread into the Great Lakes both through canals and the ocean freighters that travel in them, Egan said.

Egan explained that ocean freighters require water in the ballast, material used to stabilize a ship, to keep the vessel properly balanced. When the ballast water is discharged and emptied into the canal, the animal species that were taken up with the ballast water are emptied with it.

According to Egan, the most dangerous species to have traveled through ballast water have been the zebra mussel and the quagga mussel. Both invasive species blanket the bottom of lakes and filter the water, sucking up nutrients that top feeders rely on, he said. This, in turn, has greatly affected commercial fishing.

Despite the threat of invasive species spreading, Egan insisted that it is not a lost cause. He discussed the gobi fish, an invasive species itself, who eats the harmful mussels wreaking havoc on commercial fishing.

It is because of the gobi, Egan said, that Lake Huron is experiencing a return in lake trout, white fish and walleye.

“We are seeing the top of the food chain is stitching itself together … Nature does a very good job of finding that balance if we just give it a minute to breathe,” Egan said.

Egan stressed the importance of political activism in keeping the Great Lakes clean and accessible.

He called upon the audience to use their votes to prevent rolling back the Clean Water Act, a bill that protects the Great Lakes and other bodies of water from pollution.

“Make sure that the next generation has experience with the lakes so they have an ethic for taking care of them because we let that slip in the 1960s and we paid dearly for it,” Egan said.