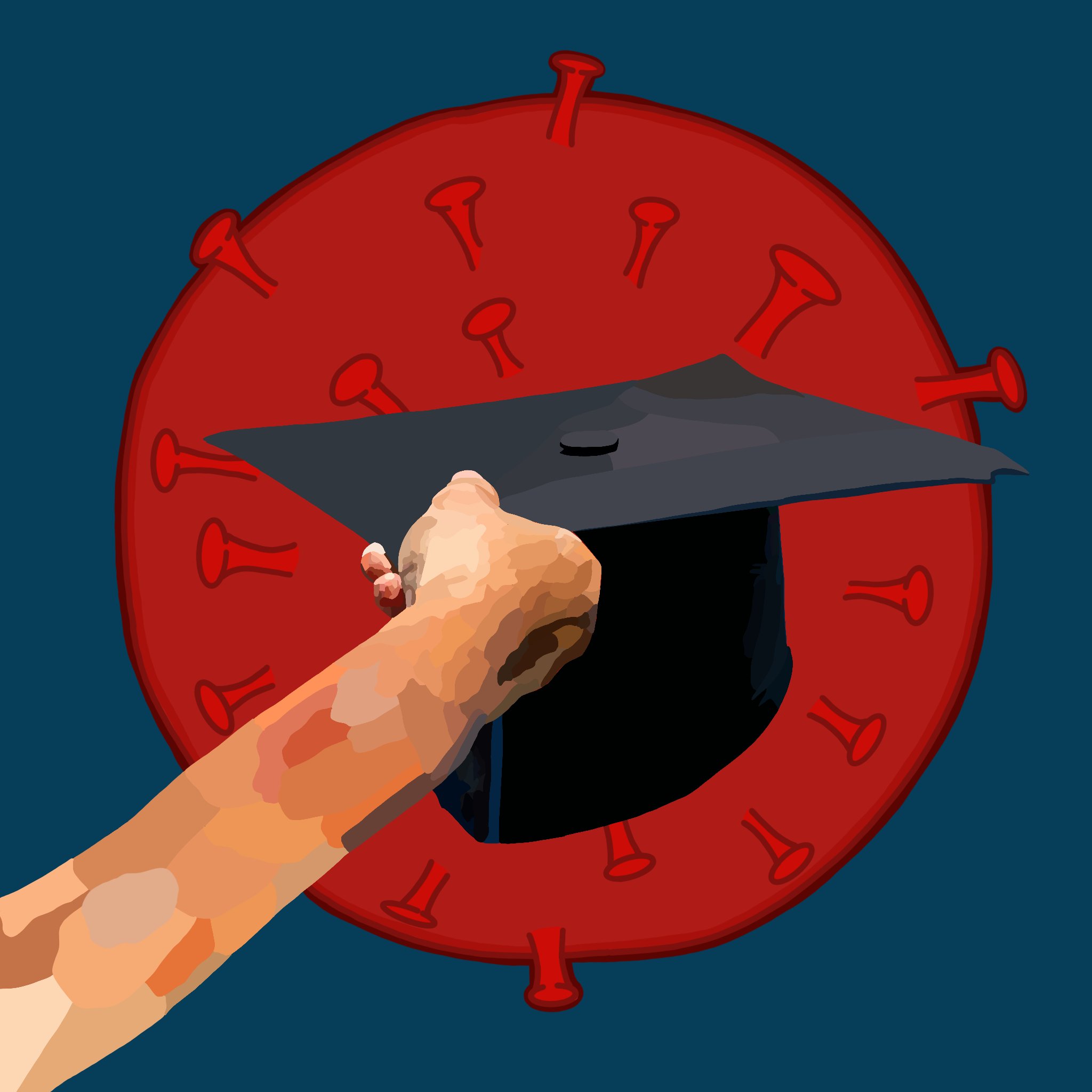 Zoey Colglazier watched her graduation from the University of Wisconsin on a computer screen, while sitting in the same chair she sat in when she wrote her college application.

The only high school teacher UW freshman Grace DeGroot has seen since March has been her Spanish teacher — who handed DeGroot her diploma through her car window.

Whether finishing high school, undergrad or graduate school, post-grad life has been anything but normal for the class of 2020.

Graduating Amid a Pandemic

Last spring, UW announced a suspension of all face-to-face instruction from March 14 until April 10, which was later extended to the end of the semester. Then, March 18, Gov. Tony Evers instituted a closure of all K-12 schools.

DeGroot said at first she thought the cancellation just meant an extra week of spring break.

“We were told it was going to be for a week or two,” DeGroot said. “I was with one of my close friends and since school was canceled we had a big family meal and watched movies all night.”

In the second week of March, Corona finished up experiments for his dissertation at the National Institute of Standards in Washington D.C. He said he felt like the world was “deteriorating” around him and he worried he would not be able to make it back to Santa Barbara.

Many 2020 grads stepped foot inside their alma mater for the last time in mid-March, with some attending online graduations and others like UW graduate Michelle Nguyen just trying to put school behind them altogether.

Nguyen, who received a degree in landscape and urban studies with a certificate in graphic design strategies, had a stressful final semester at UW as she lost access to ArcGIS — a program her classes required that she could only access through school computers. While the landscape architecture studio stayed open, as someone who is immunocompromised, she could not risk being around other students.

After completing alternative projects, Nguyen graduated and moved to New York in July, ready to escape the Midwest.

“It felt like I was cornered into either staying in the Midwest, but having to live with my parents or kind of just completely breaking away and doing what I wanted, in my own life,” Nguyen said. “The transition was really difficult … because I knew if anything were to happen, it would be difficult for us to be together again.”

And then something did happen. Right before the holidays Nguyen’s father, an essential worker, got COVID-19. While he has since recovered, Nguyen said being away during this time was hard because while her family tried to shield her from how much pain he was in, she could tell how much the virus “aged” him simply by looking at pictures.

This sudden disconnect from home also tolled on UW freshman Michael Nichols, who said going to school with the same batch of kids for the past 13 years continues to cause him to feel very attached to his high school.

“Now that I’m gone I still feel a strong connection and a strong desire to give myself to the school and I don’t know if that’s because I was so involved or because I still don’t really have a resolution,” Nichols said.

Despite this lingering connection, Nichols said he got to know the other students in his dorm within the first few weeks because he lives in Ogg’s Business Connect Learning Community, so he and his neighbors took many of the same classes.

For many other freshmen, however, getting-to-know-you activities held over Zoom and closed-door policies made dorm bonding difficult. DeGroot had an especially hard time meeting fellow residents in Leopold Residence Hall because she tested positive for COVID-19 on the first day of class.

DeGroot got tested the day she moved into Leopold and three days later she got her results. She quickly packed her bags and walked to the isolation housing at Humphrey Hall. Housing sent her roommate — who had yet to test positive — to an isolation hotel.

Eventually, DeGroot’s entire family tested positive, though they have now all recovered. When she arrived at Humphrey Hall, DeGroot got a new “isolation roommate.” She spent a total of 10 days in isolation, but she was allowed to hang out with the other Humphrey residents because they had all tested positive.

DeGroot said this shared situation gave them something to bond over.

“There was a common energy amongst all of us,” DeGroot said.

DeGroot’s roommate was isolated for 17 days because she could not leave her room — she had to wait for a test to be sent to her before she received the all-clear. She had no roommate and no human contact during this time. She was also not given a key so if she left her room, she would not be able to return without contacting UW staff.

DeGroot said she and her roommate FaceTimed every day while in isolation and the experience actually brought them closer together.

Freshman and Ogg resident Molly Coady said though she and her roommate got along instantly, they had to get creative when getting to know other people on their floor. Coady said at the beginning of the year their RA made a PowerPoint so residents could introduce themselves over Zoom.

“It was just funny knowing that I was listening to this kid talk and he was literally on the other side of this wall,” Coady said. “There’s definitely still a sense of community like I could tell you everyone that lives on my floor, but there’s still that disconnect because we can’t really meet that much face-to-face.”

Outside of college, finding this community proved even more difficult.

Nguyen met people through a Facebook group for local food banks, farmer’s markets and community gardens. Though these relationships are largely online, she said members will exchange veggies with one another, which has made their friendship a “slow but very memorable” process.

Both Corona and Colglazier started new in-person jobs this fall. Despite being in-person, social distancing measures have made meeting their new co-workers difficult.

Colglazier, who works in Applications Services Applications Readiness at Epic, said the company assigned co-workers into small groups to help with bonding. She said they do outdoor activities together like ice skating. Outside of this, Colglazier said she has interacted with most of her co-workers over Zoom.

“My team that I work on, I’ve seen them maskless when we’re on a video call and they have their camera on, but when I’m walking in the hallway if I see someone with their mask on, I don’t even recognize that they’re one of my coworkers,” Colglazier said.

Colglazier said she has also found new ways of staying in touch with friends and family during this time, like using Disney Plus’s GroupWatch feature to watch TV together or playing video games. Around the holidays, Colglazier and her family went to her grandma’s nursing home and talked on the phone with her while outside her window.

Similarly, Corona couldn’t celebrate in-person with his family after his dissertation defense but he said the online format did have some benefits.

“There were advantages to doing the [dissertation] defense online, I was able to invite collaborators that were around the world,” Corona said. “Even academic professors and other graduate students from different universities could attend and that would not have been possible if it were in-person.”

Looking for Opportunity in Crisis

Because the ability to form new relationships has been limited during this time, many have spent their quarantine becoming closer to those around them.

After graduating, Corona was able to move in with his wife of four years for the first time. He said they have been exploring their New Jersey neighborhood by going on walks, though they are excited to be able to check out the local bars and restaurants someday.

Nichols spent much of his last summer before college tracing his family ancestry with his dad — a project which brought them closer together.

Coady, whose older sister graduated college the same time Coady graduated high school, said having someone else around who was going through a similar transition helped.

Nguyen said because of the distance, she has had to be very intentional about staying in touch with friends, making them a “part of her everyday life” through FaceTime and regular texting. She also said her quarantine hobby of cooking and baking has made her feel closer to both her sister who loves to bake and her mom, who always cooked for Nguyen’s family.

“I think being so far away from everyone has forced me to be more affectionate and expressive with my love,” Nguyen said. “Something that brings me a lot of joy is cooking for everyone in my apartment and having them like it, it also, in a weird way, helped me understand my mom a lot.”

While the surge in COVID crafts, quarantine cooking and at-home hobbies has shown people’s ability to make the best of bad situations, plenty of 2020 grads have their sights set on the future.

Nguyen is waiting for the vaccine to become more available before she returns to Wisconsin to see her family and friends. Both DeGroot and Nichols are hopeful by next fall they’ll have entered a campus building that isn’t a dorm or dining hall and Colglazier wants to be able to return to campus and sign the inside of the Science Hall tower — a tradition for all UW geography graduates.

On a broader scale, both Nguyen and Colglazier said they hope some societal lessons can be learned from the past year.

Nguyen said having her dad contract COVID-19 while watching politicians who downplayed the pandemic get vaccinated angered her. Nguyen said the way the U.S. government treats its working class is “dehumanizing” and unsustainable.

Colglazier said returning to business-as-usual once vaccines are widely available should not be the goal.

“I hope a year from now we’ve been able to, maybe not go back to normal, because I think there were a lot of inequalities in our society that the coronavirus laid bare, but I hope we’re able to work to reduce them or get rid of them entirely,” Colglazier said. “I hope we have a better normal, a more just normal.”