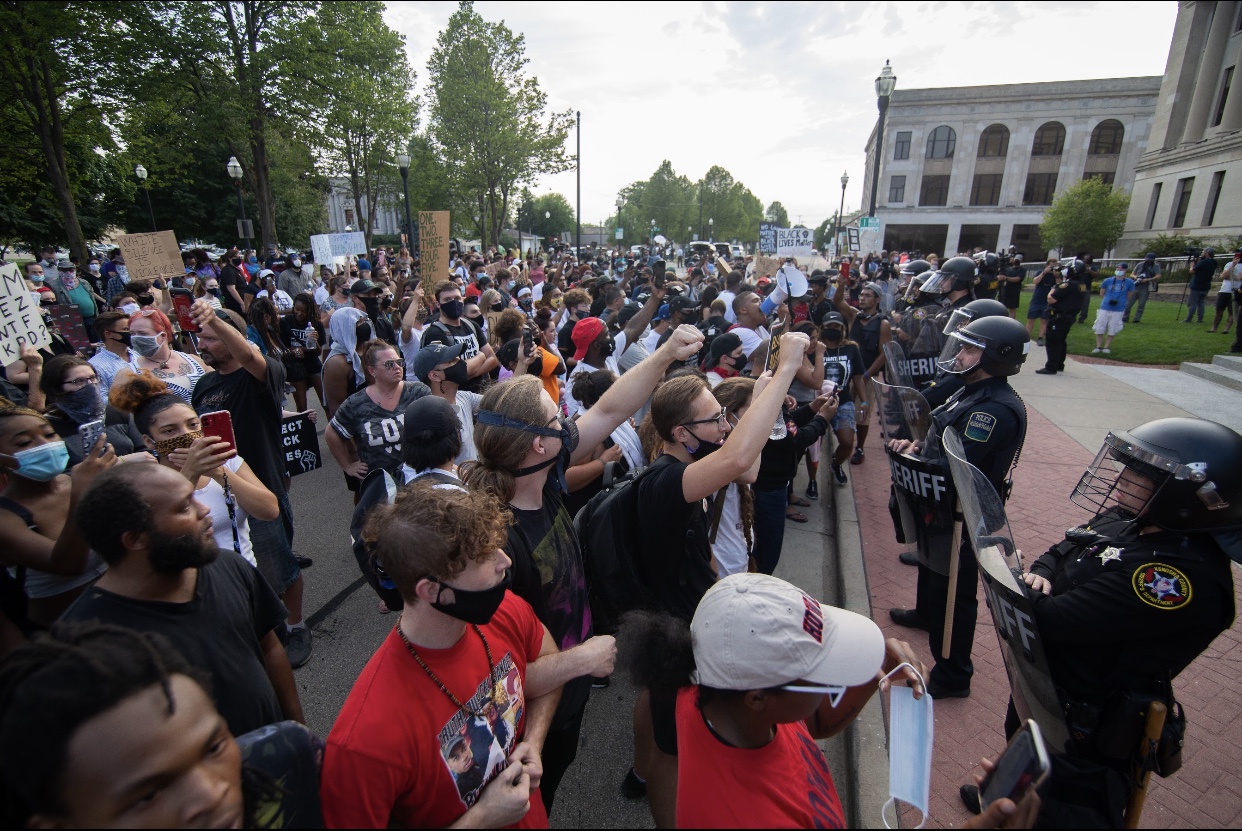 Days after the shooting of 29-year-old Jacob Blake in late August, unrest erupted in the streets of Kenosha.

Kenosha became a hotspot for protests spearheaded by the Black Lives Matter movement after a video of Officer Rusten Sheskey shooting an unarmed Jacob Blake surfaced and garnered national attention. The demonstrations were among a multitude stemming from backlash against police brutality and shootings of unarmed Black Americans.

Protests in Kenosha at times turned into rioting, leading to property damage and the destruction of many local businesses.

Gov. Tony Evers, D-Wisconsin, declared a state of emergency in Kenosha, but the motivation behind the destruction seen throughout the city appears highly motivated, Black photographer and activist E. Mackey said.

“In Kenosha, it didn’t seem like acts of aggression for the sake of being aggressive,” Mackey said. “It really seemed like people were angry, upset and in pain. So it seemed like a genuine, ‘We are upset. We’re doing this because we’re upset.'”

Jim Degrazio, a Kenosha resident and the owner of Treasures Within Kenosha — a local discount store — said he faces an estimated $10,000 in damages.

Treasures Within launched an online fundraising campaign in order to cover the cost of the damage, as his business has not been able to operate while the demonstrations have been in Kenosha.

“We’ve been closed since it happened,” Degrazio said. “The windows are boarded up, the business has been closed, no income. We will [re]build and [are] working on the restoration of business practices, you know. Got a long way to go.”

Degrazio condemned violence in Kenosha and called for the Kenosha police force to intervene against protesters who are causing the damage.

Degrazio said he hoped in lieu of the handful of violent acts he witnessed, the protests would remain entirely peaceful.

“I think there are other ways they could express their views, rather than hurting businesses and people,” Degrazio said. “I think a more aggressive stance would have been able to forcibly stop them. You know, arrest them, take them into custody. You know, to stop this [from] happen[ing], that should have been done, I believe the first night.”

Mackey acknowledged the destruction derived from the feelings of anger among Black Americans, but Mackey differentiates the Black Lives Matter movement from the Kenosha protests.

“I can say unequivocally no,”  Mackey said. “The Black Lives movement is not about destruction. However, it is 100% spot-on, bullseye, finger on the pulse of how we feel in Black America. I think it is important to understand that those are two different things — the Black sentiment and how we feel in the country, and what Black Lives Matter is about and it’s fighting for are two totally different things.”

During one night of protests, 17-year- old Kyle Rittenhouse walked the streets equipped with an assault rifle. Protesters chased Rittenhouse after he had a confrontation with another protester and gunshots were heard.

Those chasing him attempted to disarm him, during which Rittenhouse shot and killed two protesters and injured one. Rittenhouse is now facing homicide charges in his home state of Illinois.

Activists raised questions as to why Rittenhouse was at Kenosha when he lives in Illinois — individuals like Mackey are outraged at what they perceive as an explicit double standard shown by police as a result of the shooting.

“You have a situation where we have Jacob Blake, who was not armed, he had on a shirt where you could see he wasn’t armed,” Mackey said. “So explain how you can be at a riot … With the AR-15 strapped across your chest with your hands up walking toward the police from the direction of the shooting that they were going to. And you pass by him. But then you shoot the black guy in the back, seven times, with no weapon.”

Kenosha was lifted out of curfew Sept. 2 as Mayor John Antaramian describes the protests as relatively peaceful. Governor Tony Evers, a vocal advocate for peaceful protests, condemned the violence on Twitter.

The future of potential reform in policing throughout Wisconsin is uncertain as a recent petition to recall Evers has gained traction.