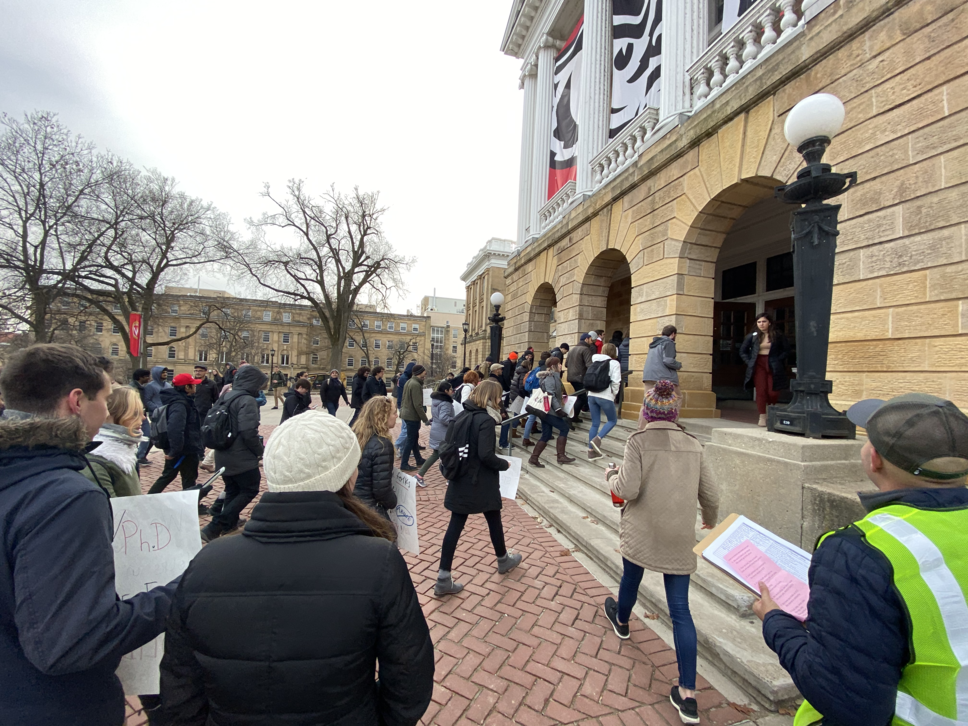 Protestors gathered on Engineering Mall today at 12:30 p.m. to protest the University of Wisconsin’s decision to allow engineering professor Akbar Sayeed to return to campus and issue a resolution to the provost.

The Electrical and Computer Engineering Graduate Student Association released last month a list of demands they hope UW will implement in order to support and protect graduate students from similar situations. They also organized the protest and wrote the resolution contains a “plan of action” the ECEGSA wants the university to take, electrical engineering graduate student and ECEGSA member Kyle Daruwalla said. Daruwalla said the resolution includes firing Sayeed.

They delivered the resolution to Provost Karl Scholz. 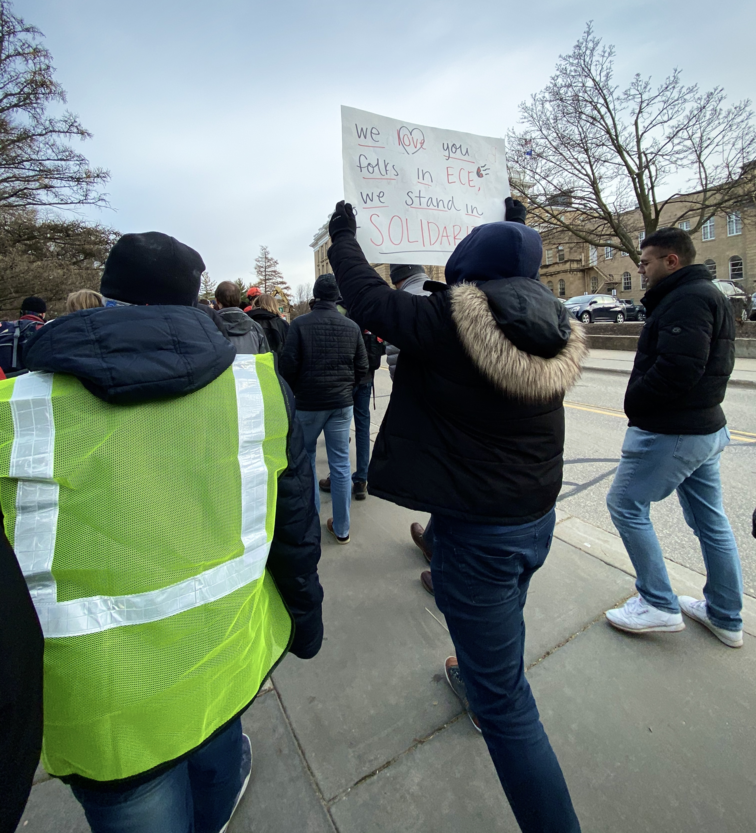 Daruwalla said one of his problems with Sayeed’s return is the precedent UW is setting. He said since this is the first case of its kind, and by allowing Sayeed to return to campus, UW’s setting a precedent on how they deal with harassment.

Daruwalla said they chose to protest to both apply pressure from within the system and outside it. He said graduate students have been working directly with university officials to try and change the policies, but the situation also requires a multi-pronged approach.

“The reason we went to the scale of a protest is because on this particular issue, the university would rather not act at all than do something,” Daruwalla said. “We need to both apply outward pressure on them to encourage the administration to take some action as well as work with faculty members, Faculty Senate and the Faculty and Staff Union to get resolutions from within the university system that the administration can adopt and be comfortable passing.” 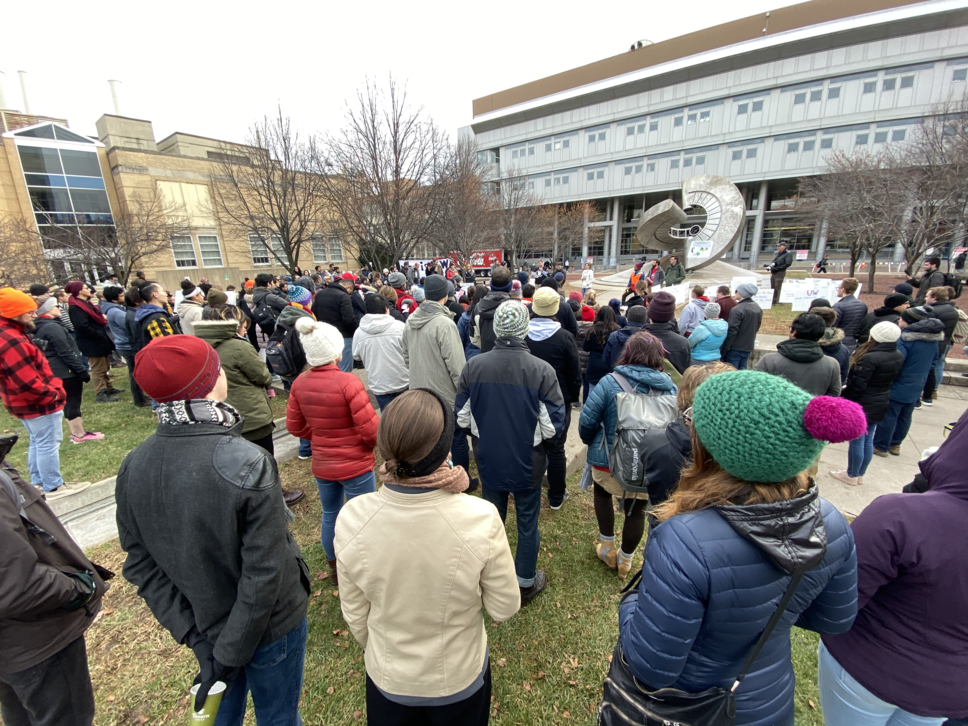 Daruwalla said professor of planning and landscape agriculture Kurt Paulsen spoke at the protest, and he said it felt comforting to know some faculties’ viewpoint aligned with that of the ECEGSA.

Daruwalla said the protest brought together students from disciplines across campus, from engineering students to other, non-STEM graduate students, and he said this interdisciplinary connection made the protest unique. Also, he said this was the first time there had been a protest on Engineering Mall.

“People have really latched onto it and galvanized a lot of support across the community,” Daruwalla said. “I would say that it’s probably the actions of the university. The incident itself is not unique, but the way that the university responded to the incident, that doesn’t make any sense. It’s clear that the university is on the wrong side of the line.” 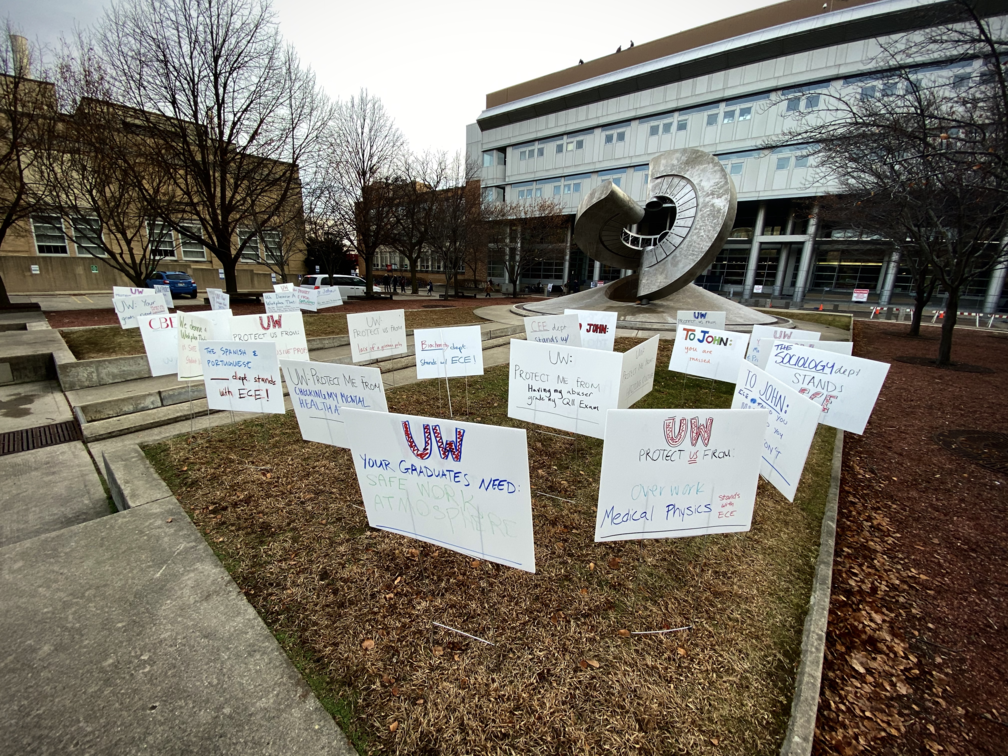 In an email to The Badger Herald today from Director of UW Communications Meredith McGlone, Robertson made a statement sending condolences to Brady’s family and addressing Sayeed’s situation.

“This was a deeply disturbing situation that goes against the core values of our institution and leaves us with a profound sense of loss,” Robertson said statement in the statement. “In the College of Engineering and at UW–Madison, we are fully committed to maintaining a supportive climate in which all members of our community treat each other with respect. We do not tolerate hostile or intimidating behavior.”

Robertson’s statement also said Sayeed will remain on adminstrative office duties in the spring until they’ve determined “adequate measures are in place to provide oversight of the faculty member as a teacher, mentor and research advisor, as well as to prevent potential harm to students.”

Daruwalla said they plan to continue working with the College of Engineering, as well as other groups like the Faculty Senate and the Faculty and Staff Union to put their demands in place.

“We hope that whatever models we implement, will get adopted by the college and hopefully, eventually at the university level,” Daruwalla said. “If we can get support for that resolution and it does get passed, then that will probably be a major catalyst toward getting the provost to adopt the plan.”