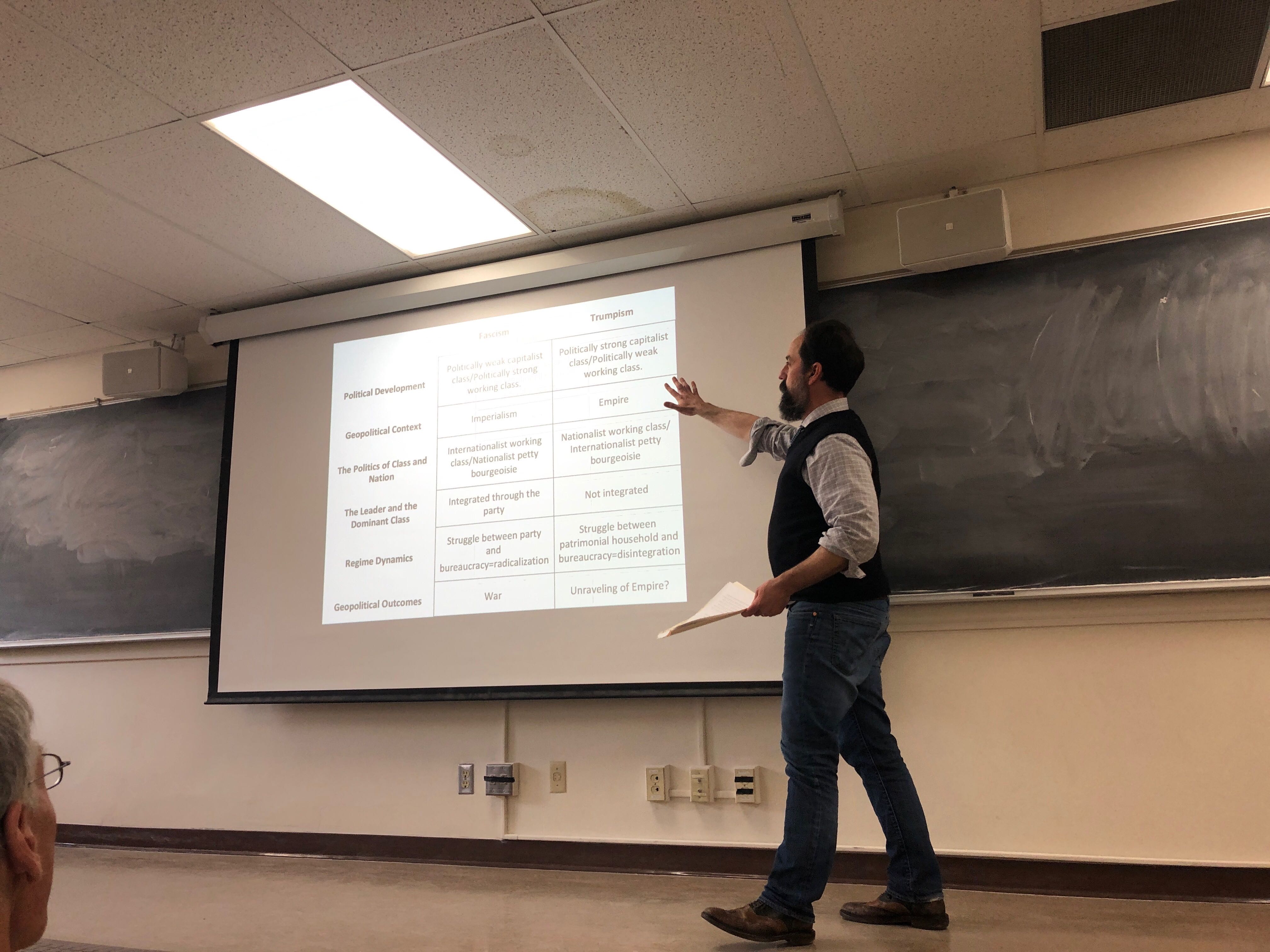 A sociology professor at the University of California-Berkeley, spoke Wednesday to discuss why he doesn’t believe President Donald Trump is a fascist.

Professor Dylan Riley began the talk — the second of a three-part series hosted by the Havens Wright Center for Social Justice — by saying there is a lot of concern that fascism is on the rise because of the Trump administration.

But, Riley said we should look at Trump differently.

“’Trumpism,’ whatever that turns out to be, is not even an emergent form of fascist rule,” Riley said. “I’m going to suggest instead that this is a form of what I’m going to call neo-Bonapartist patrimonialism.”

Neo-Bonapartist patrimonialism is Trump’s direct relationship — “unmediated by thought” — with his supporters. The relationship demands loyalty to his personal power, Riley said, but Trumpism is different from fascism.

First, fascism and Trumpism developed differently, Riley said. Throughout history, fascism has developed when there is a strong working class population and a weak capitalist population.

The U.S. does not have this kind of political structure, he said.

“The situation, of course, in the contemporary U.S bears basically no similarity to this at all,” Riley said. “We have two essentially capitalist parties that have dominated politics in this country for decades. This is really an entirely different kind of political context than what you get in the classic fascist cases.”

Second, the U.S. does not have the right geopolitical structure to nurture fascism, Riley said.

Fascism traditionally occurred in imperialistic countries that fueled their land-grabs with frequent military drafts. The U.S., a declining empire that’s not seeking to amass land and whose politicians are averse to drafts, can’t foment the same radical mass movements, he said.

Because fascist regimes are focused on accumulating land and “overturning the international order,” Trump’s approach to international relations are not fascist, Riley said. Trump is focused more on conserving the U.S.’ current land and power and stays relatively uninvolved in international politics, unlike other, more traditional fascist leaders.

It is important to differentiate between Trumpism and fascism, Riley said, because it shows there isn’t an established system of “Trumpists.”

“We shouldn’t be thinking about why are there some people who seem fanatically devoted to Trump,” Riley said. “What we should be thinking about is how could the political system be so deflated that this person who, many of his voters don’t even particularly like, somehow got into the White House?”

A key distinction between fascism and Trumpism is that traditional fascism is a reaction to the left, while Trumpism developed because the U.S. lacks a strong left, Riley said. While there may be a core of devoted Trumpists, his followers do not make up the type of mass movement required by fascism.

Because Trumpism is not a mass movement, it is easier to change the minds of its supporters.

“There’s not an ideology that’s holding them all together, which in a sense is a somewhat hopeful message,” Riley said. “I believe these people are transformable through some sort of process of political education.”