According to the Wisconsin State Journal, Hagedorn called his victory a historic, insurmountable win in a statement at ]Waukesha’s Ingleside Hotel Wednesday morning

Hagedorn held a 5,960 vote lead over his opponent Wisconsin Chief Appeals Court Judge Lisa Neubauer Wednesday, WSJ reported. A total of 1.2 million votes were cast, with Hagedorn eking out a win with a 0.49 percent margin.

“This isn’t the outcome we hoped for, but it’s what our campaign for justice must now tackle — with the vote total neck and neck, it looks like we’re heading into a potential recount,” a campaign statement from Neubauer said, according to Wisconsin Public Radio.

Because the Neubauer campaign will have to pay for the recount, they started soliciting donations and volunteers “to make sure every vote counts,” according to a video on social media that accused Hagedorn’s campaign of being the beneficiaries of “an unprecedented deluge of last-minute, outside dark money spending.”

In response, Hagedorn said he is financially and legally prepared for a recount, WSJ reported.

“It looks like the lead is quite large, and that a recount would not make a whole lot of sense,” Hagedorn said. “If that’s what Judge Neubauer decides to do, we are certainly more than ready for that.”

The winner will replace State Supreme Court Justice Shirley Abrahamson. While the statewide race was officially nonpartisan, Hagedorn is backed by Republicans while Neubauer is backed by Democrats. 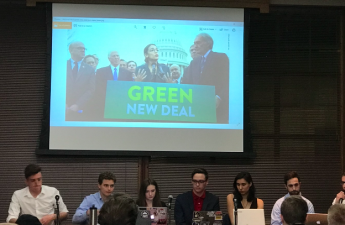 According to WPR, Hagedorn’s win would be a major win for conservatives, likely preserving a conservative majority on the Wisconsin Supreme Court until at least 2023.

During an interview Wednesday morning on Wisconsin Public Radio, Gov. Tony Evers said the election was close enough for a recount.

“I know everybody that voted, even those that did not vote, want every vote to count,” Evers said. “So it’s likely to be a recount and we’ll just have to wait until after that to declare a victory.”