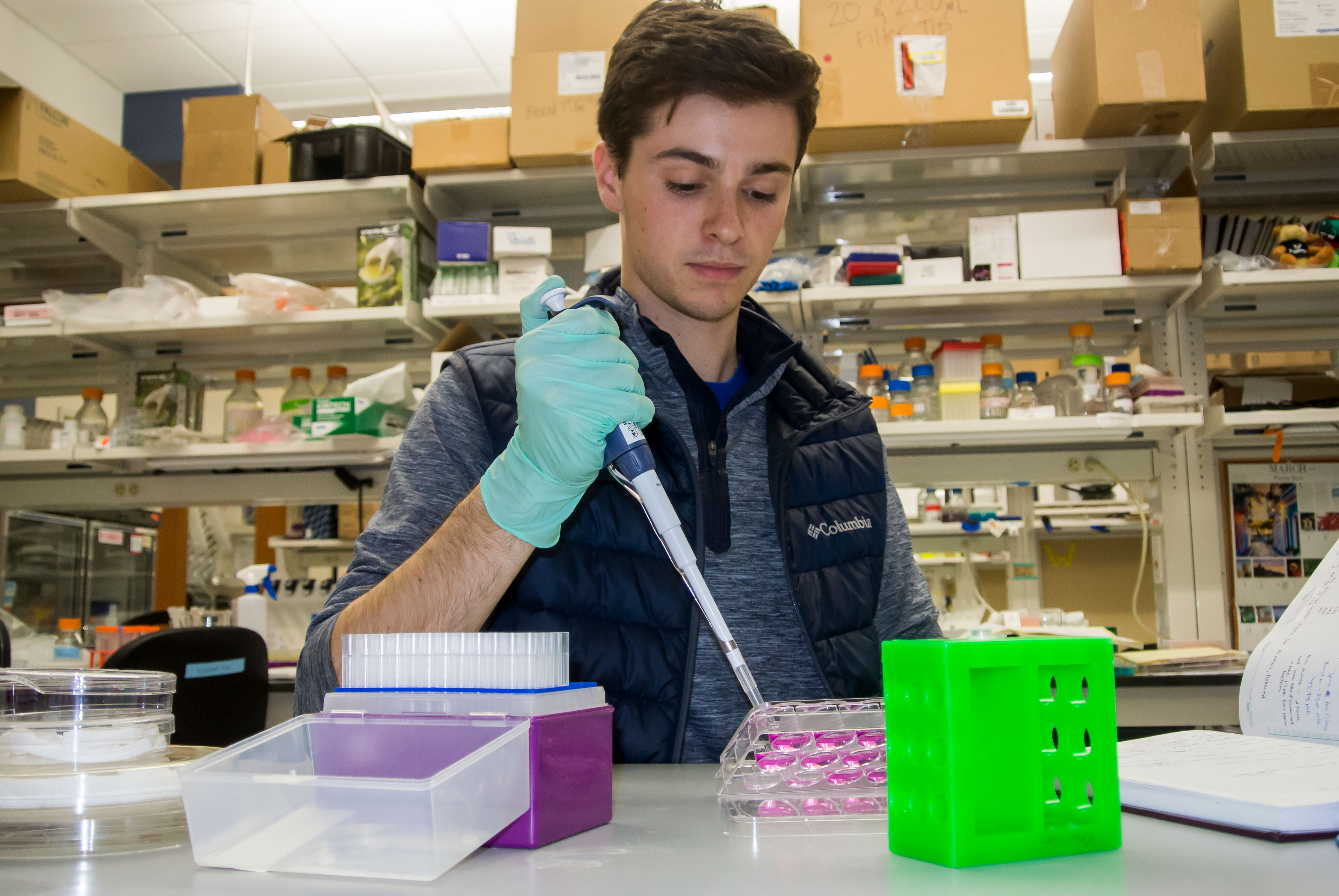 Every week, The Lab Report will feature a different undergraduate research assistant on campus and their experience in the lab.

Through his research, a University of Wisconsin biomedical engineering student focuses on improving understanding of the earliest stages of ovarian cancer.

Senior Will Flanigan studies ovarian cancer with the Pamela Kreeger Lab in the Wisconsin Institute of Medical Research.

“We’re trying to figure out how [ovarian cancer] starts, so we can try and target something earlier on,” Flanigan said.

Currently, many women who are diagnosed with ovarian cancer are diagnosed at a late stage of the disease. This late diagnosis makes the survivor rate dismal, Flanigan said.

Diagnosis is tricky because ovarian cancer’s symptoms resemble so many other things, Flanigan said. In particular, the symptoms, like lower abdominal pain, are very difficult to distinguish from the side-effects of healthy menstruation.

Even in post-menopausal women, detection can be difficult until the cancer spreads to other areas of the body, at which point it’s almost untreatable, Flanigan said.

Recent findings, however, have researchers completely rethinking how the disease begins.

The scientific community used to think the cancer developed from cells on the surface of ovaries, but evidence suggests it actually starts with cells from the fallopian tubes, which transport eggs from the ovaries to the uterus, Flanigan said.

The cancer specifically starts with cells from the fimbria, which is a series of fingerlike projections on the end of the fallopian tube. Fimbriae regularly shed their cells, which then float off on their own, Flanigan said.

Without receiving the signals they usually get from connections with neighboring cells, these floating cells eventually terminate themselves through a process called anoikis. Anoikis is one of many forms of “programmed cell death,” which exist to ensure misbehaving cells don’t persist and create problems for the body, Flanigan said. 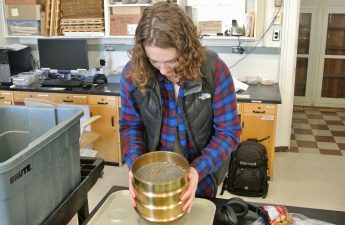 The Lab Report: Prairie management strategies in face of climate changeEvery week, The Lab Report will feature a different undergraduate-research assistant on campus and their experience in the lab. Ellen Read…

When cells from the fallopian tube have a mutation in a specific tumor-suppressor gene key to regulating the cell cycle, they are able to live on their own much longer than usual, Flanigan said.

Being able to travel further without dying gives these cells a greater chance of making connections with new cells to support their proliferation. These mutated cells lead to ovarian cancer when they find a way to implant in the ovary, Flanigan said.

“If [these cells] can survive from the fallopian tube to the ovary, there’s a chance they’re going to form cancer,” Flanigan said. “This mutation is present in 95 percent of patients diagnosed with ovarian cancer. We’re sure it’s part of the cause of the cancer.”

It seems the way these rogue fallopian tube cells find their way into the ovary is through a natural breach formed during the menstrual cycle, Flanigan said.

During the menstrual cycle, an ovarian follicle erupts to release an egg. This process removes the top layer of cells from the ovary and also releases a bunch of molecules that provide support to surrounding cells, Flanigan said.

Flanigan is studying the “follicular fluid” that is released when the ovarian follicle bursts. The Kreeger Lab has found follicular fluid helps the survival of fallopian tube cells and helps cells floating in suspension grab onto their neighbors to form clusters.

Follicular fluid contains several hundred molecules, and Flanigan is trying to determine which of these are critical to prolonging fallopian tube cell survival. 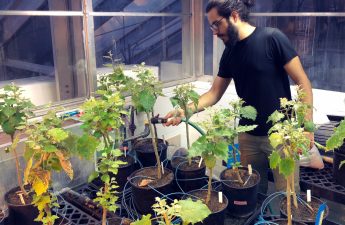 The Lab Report: Benefiting humanity by enhancing plant, fungal relationshipsEvery week, The Lab Report will feature a different undergraduate-research assistant on campus and their experience in the lab. Ané Read…

In the lab, Flanigan takes mutated fallopian tube cells and simulates them floating to the ovary. He coats the bottom of a petri dish with a hydrophobic coating that prevents cellular attachment so that these cells have to float in isolation.

Flanigan’s mentor, Andy Fleszar, a biomedical engineering doctoral student, stressed how important understanding these aspects of the ovary microenvironment are to the project’s overall goal.

“Earlier detection of ovarian cancer could lead to a significant increase in its survival rate, however, before we can achieve earlier diagnoses, we need to gain a better understanding of early-stage ovarian cancer progression,” Fleszar said.

Flanigan has enjoyed his time with the Kreeger Lab and thinks his undergraduate research experience has played a big role in his development as a student.

Flanigan stressed there are undergraduate research positions at UW for virtually every topic and the best way to get involved is to find a project you’re interested in and communicate your interest to the project’s principal investigator.

Flanigan plans to continue his education and eventually get a PhD in biomedical engineering. He wants to become a researcher who focuses on early medical diagnoses and treatments.

“Without [the undergraduate research experience] I don’t think I could really go on to what I want to do next,” Flanigan said. 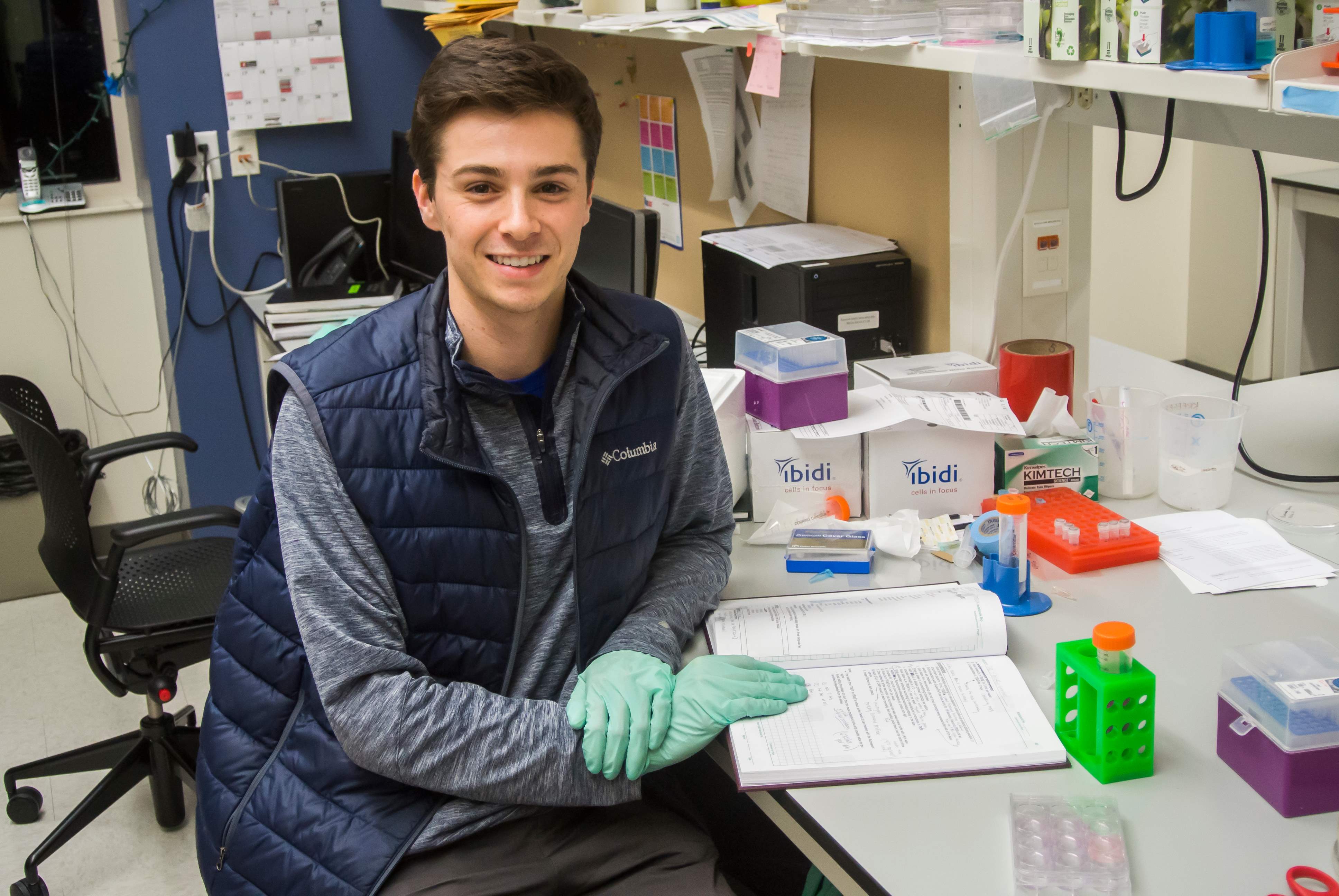