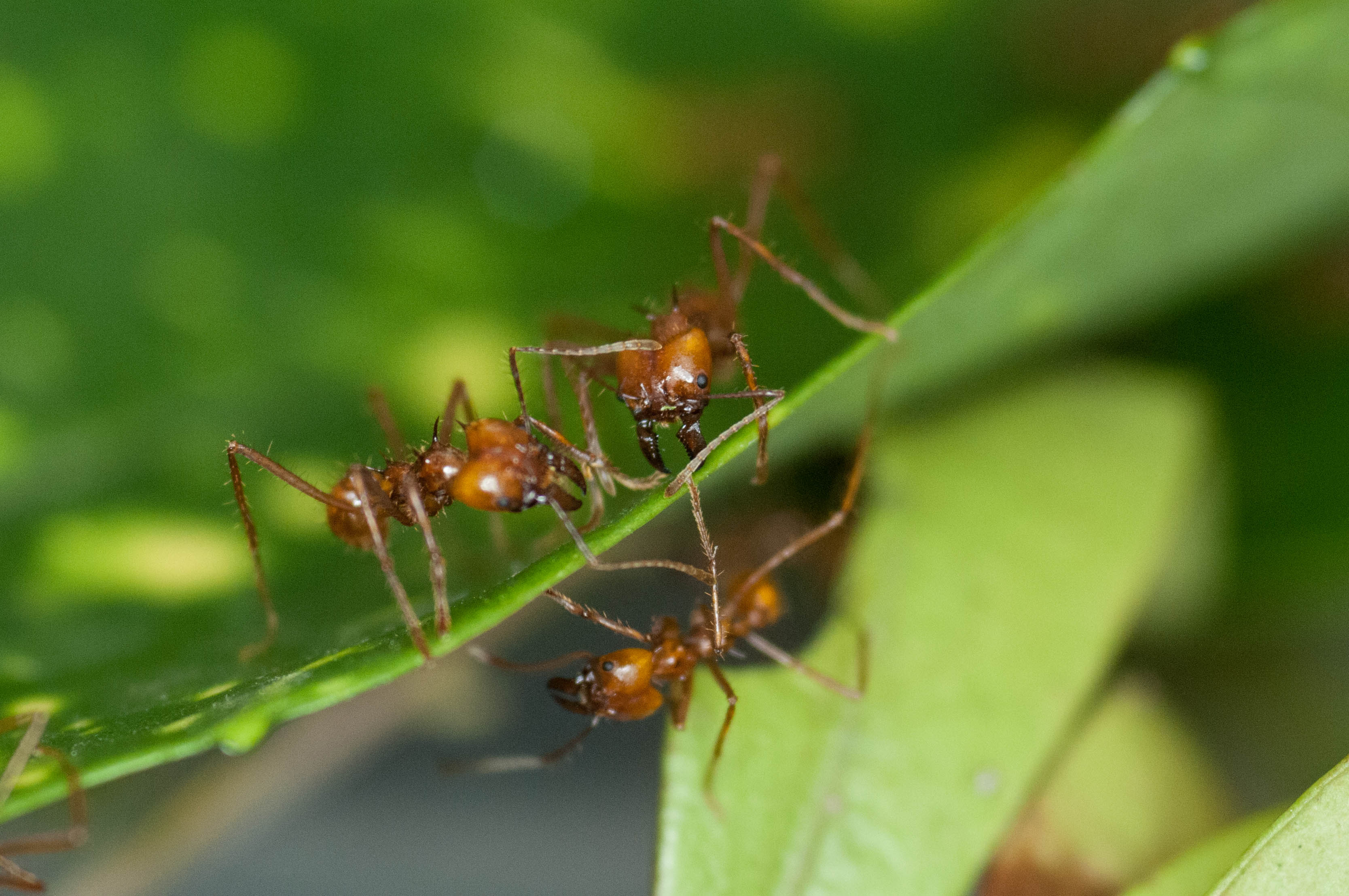 In the late ‘90s, Cameron Currie, now a professor of bacteriology at the University of Wisconsin, traversed through the Panamanian rainforest to observe the world’s most ancient agriculturalists: leaf-cutter ants.

These unique ants could be the key to addressing humans’ increasing resistance to antibiotics.

Like humans, leaf-cutter ants grow their own food, a fungus related to the common mushroom. They can carry 5,000 times their body weight, Currie said, and strip the leaves of an entire tree in one day to feed their fungal gardens.

Currie plowed through the dirt with his hands, uprooting colonies containing millions of ants that find shelter within the 3,000 rooms connected by intertwining tunnels underneath the tropical terrain.

After taking a closer look at the leaf-cutter ants in his lab, he noticed it: a waxy substance covering the ants’ bodies.

But after sifting through thousands of articles, he found nothing to explain its purpose.

By separating the ants from their fungal gardens in his lab, Currie discovered this wax coating wasn’t actually wax at all, but a special type of bacteria.

In the absence of the bacteria-donning ants, Currie observed that their fungal gardens began contracting diseases — leading to an all-too human realization.

“I actually stated it as a joke,” said Currie. “Wouldn’t it be funny if these ants are using antibiotic-producing bacteria like humans do?’”

Currie’s discovery of antibiotic-producing bacteria on the bodies of millions of leaf-cutter ants, as well as common insects found in the United States, could potentially replace soil bacteria as a source of antibiotics. Soil bacteria is currently used in 75 to 85 percent of pharmaceutical drugs that are losing effectiveness on humans across the globe.

Not only do these antibiotics fight infection, they are also used in critical medical practices such as transplant surgery and premature childbirth, Currie said.

“It’s fundamental to all modern medicine,” Currie said. “If you took away antibiotics, we would be biomedically put back in the dark ages.”

Though bacterial diseases are treatable with most of these antibiotics, some bacteria’s resistance to some antibiotic strains found in this group of soil bacteria means the mortality rate from these infections has dangerously increased, UW Professor of Medicine and Division Chief of Infectious Disease Dr. David Andes said.

A survey conducted in the UK, Andes said, predicted that by 2050 more than 10 million people will die per year from antibiotic-resistant diseases — more than the amount of people who die annually from heart disease and cancer combined.

But even healthy people too, Andes said, can be infected by antibiotic-resistant bacteria, meaning no group of people are immune.

For doctors and nurses who work at the UW Hospital, these cases are becoming more common.

“Here at the hospital, easily half of the infections we treat are drug-resistant infections,” Andes said. “We see patients [at least once] every day for which we don’t have any effective antibiotic therapy. …There’s really not anything we can do, they usually don’t survive.”

MRSA, a bacterial infection which causes noticeable wounds on the skin and severe pneumonia, has, over the past 15 years, become a quintessential case of antibiotic-resistant bacteria, according to the American Museum of Natural History.

The Centers for Disease Control and Prevention predict that antibiotic-resistant bacteria infect at least two million people in the U.S. every year. At least 23,000 of those people will die every year as a result — more than by HIV/AIDS in the US — unless a new strain of antibiotic is found, Currie said.

It takes 15 years, however, to develop a new pharmaceutical antibiotic, an undertaking which hasn’t been done in the last 20 years, Currie said.

Currently, in soil bacteria, only one out of every one million strains of antibiotics is found to have pharmaceutical potential, Currie said.

But thanks to Currie’s initial finding of fungal garden-preserving bacteria found on leaf-cutter ants, he and his lab have discovered 25 new antibiotics from screening only 250 strains of insect bacteria, including honeybees found throughout the United States and even on the UW campus.

Finding one new potential antibiotic per 10 strains of insect bacteria is a promising result, Currie said, adding that there is a 20 percent chance that these new antibiotics can be used pharmaceutically.

To become a pharmaceutical drug, however, researchers must invest several years of their lives and capitalists must invest millions of dollars.

But a 20 percent success rate for a potential pharmaceutical drug with an unknown monetary return, compared to a guaranteed profit from a cholesterol drug finding with the same success rate, doesn’t scream dollar signs to investors with millions at stake.

“We’re actually now in what’s called the ‘valley of death’ between having really promising results but not having it de-risked enough,” Currie said.

To make it through this “valley of death,” Currie has partnered with Andes.

Together, Currie and Andes, as well as two scientists based in Schenectady, New York, have created a startup company called Symbiotic to seek financial resources through federal grants to further their research endeavors on promising insect antibiotic strains.

“That would be sort of the pie-in-the-sky goal,” Andes said. “That this [insect antibiotic research] could keep going, that we could continue to develop new antibiotics that we are discovering.”

Once Currie and Andes are able to find sufficient funds for their research, they hope to patent their antibiotic strains for pharmaceutical use.

WARF, the Wisconsin Alumni Research Foundation at UW-Madison which supports Currie’s research, would be given some of the revenue the antibiotic patent makes, Currie said.

“We as a society need to invest in basic science to identify the innovations that lead to the future biomedical practices that we depend on,” Currie said.