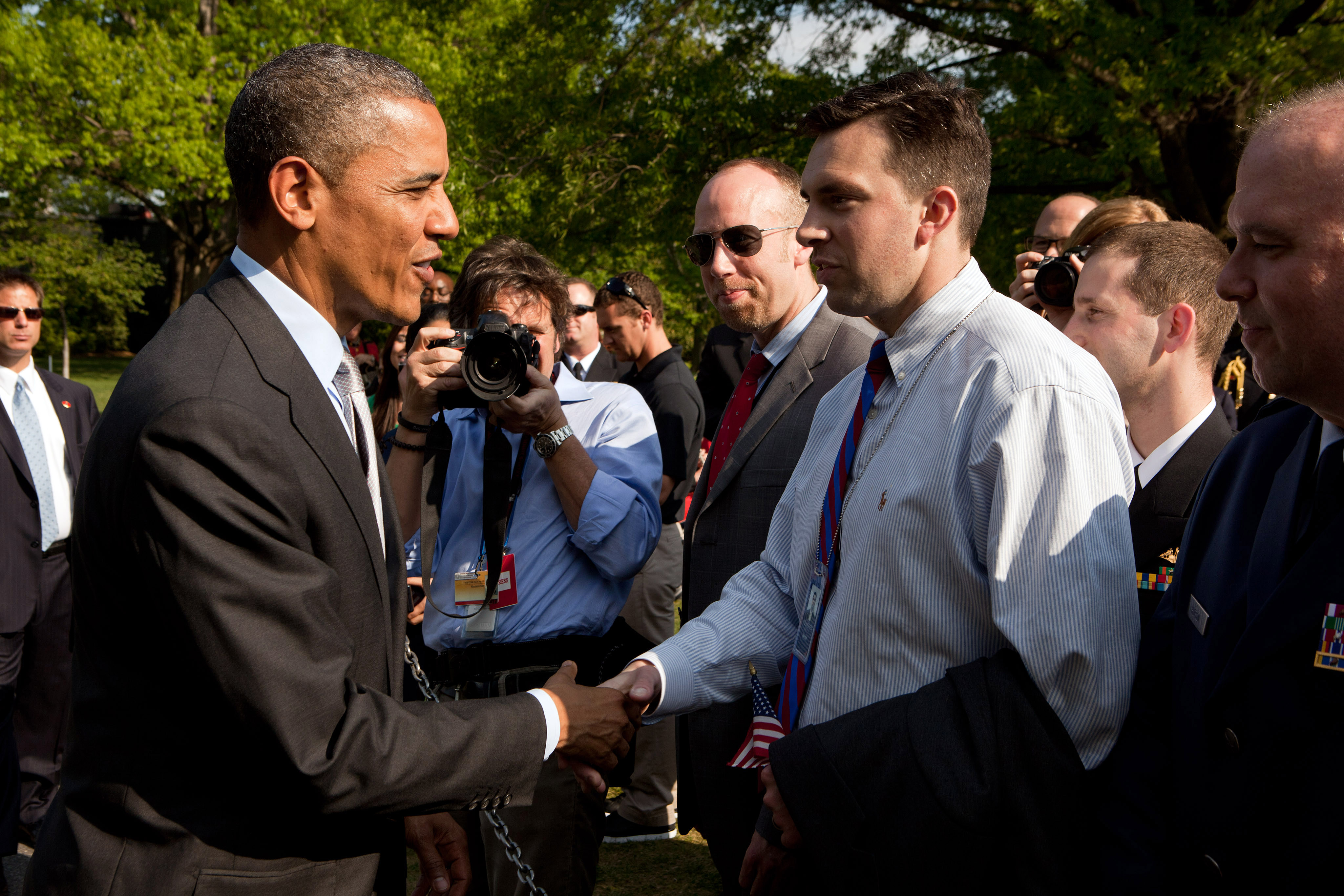 President Barack Obama greets people along the ropeline after welcoming wounded warriors to the South Lawn of the White House in celebration of the sixth annual Soldier Ride, a cycling event to help wounded warriors restore their physical and emotional well-being, April 20, 2012. (Official White House Photo by Pete Souza) This photograph is provided by THE WHITE HOUSE as a courtesy and may be printed by the subject(s) in the photograph for personal use only. The photograph may not be manipulated in any way and may not otherwise be reproduced, disseminated or broadcast, without the written permission of the White House Photo Office. This photograph may not be used in any commercial or political materials, advertisements, emails, products, promotions that in any way suggests approval or endorsement of the President, the First Family, or the White House.
Pete Souza/White House

As a special assistant to the president, Holmgren works closely with Obama, advising him on intelligence and sensitive operations. He is also the National Security Council’s link to the Intelligence Community, a federation that conducts intelligence activities that are necessary for foreign relations and national security.

Holmgren said regardless of one’s politics, President Obama is one of the most thoughtful and respectful people he has ever met.

“We should be grateful that we have a president that is so considerate and open to a wide variety of perspectives,” Holmgren said.

Holmgren is also the senior director of intelligence programs at the National Security Council, where he maintains our nation’s security by overseeing policy decisions that pertain to covert programming and the creation and implementation of intelligence reforms.

Primarily, Holmgren said his position is to coordinate intelligence among various government entities. Since agencies like the CIA and NSA have different values and interests, the biggest challenge of his position is to coordinate a plan that takes into account the motives of all stakeholders. In order to lay out a clear plan for the president, Holmgren weighs the costs and benefits to find a compromise among the views of many agencies.

Before Holmgren solidified his place in Washington, he moved around in several positions. Holmgren started his career with the Defense Intelligence Agency then was a senior analyst at the CIA Counterterrorism Center. From the CIA, he took a position as director of counter-terrorism on the National Security Coalition staff. A few advisory roles later and he is now advising the commander-in-chief.

Holmgren’s career in government has helped him receive many awards including Secretary of Defense’s Meritorious Civilian Service Award and the CIA Hostile Service Action Medal.

Holmgren graduated from UW with a B.A. in journalism and political science, then went on to receive his M.A. in global security strategies from Johns Hopkins University.

Holmgren said he values the foundation UW provided for his future.

“Attending Wisconsin was one of the best experiences of my life,” Holmgren said. “It has provided value throughout my career in unique and unforeseen ways.”

Though Holmgren started his college career strictly as a journalism major, one of the most devastating events in America’s history inspired him to get involved in our nation’s security.

After the Sept. 11 attacks 15 years ago, Holmgren changed his major to include political science to be able to serve the public. He was determined make sure an attack like that never happened on American soil again.

“I felt an obligation to serve the country and to give back to a country that gave so much to me,” Holmgren said.

After 9/11 many universities were trying to incorporate the attacks in instruction and course material. Holmgren said UW was “ahead of the curve” because they increased courses in Arabic languages, and on terrorism and politics in the Middle East. 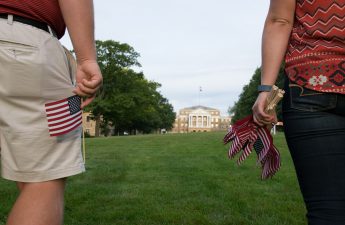 Holmgren said these courses made him stand out among graduate schools and future employers. Journalism 202 was also an important class to Holmgren. He said he learned how to write under time constraints, which continues to be valuable today.

“[These skills] have been invaluable for me in my careers both in the intelligence community and also now at the White House,” Holmgren said.

Holmgren said his time at UW was influential in forming his commitment to public service. Seeing students advocating for issues enforced the concept of citizenship and responsibility that stuck with Holmgren. These inspirations were not learned in a classroom but observed and felt on campus.

Especially in government, teamwork is crucial, Holmgren said. Wisconsin taught him that respecting others and being a good person can be helpful when making policy and compromising on solutions.

Though the resources provided at UW are important to Holmgren, there is no substitute for hard work, which he said people will recognize and respect in any career field.

Hard work has opened up many opportunities for Holmgren, but his path to Washington was not planned. Holmgren said most plans don’t work out as intended, but opportunities will always present themselves.

“As long as you let your passions and interests be the guideposts for your career, I think everything else will fall in place,” Holmgren said.