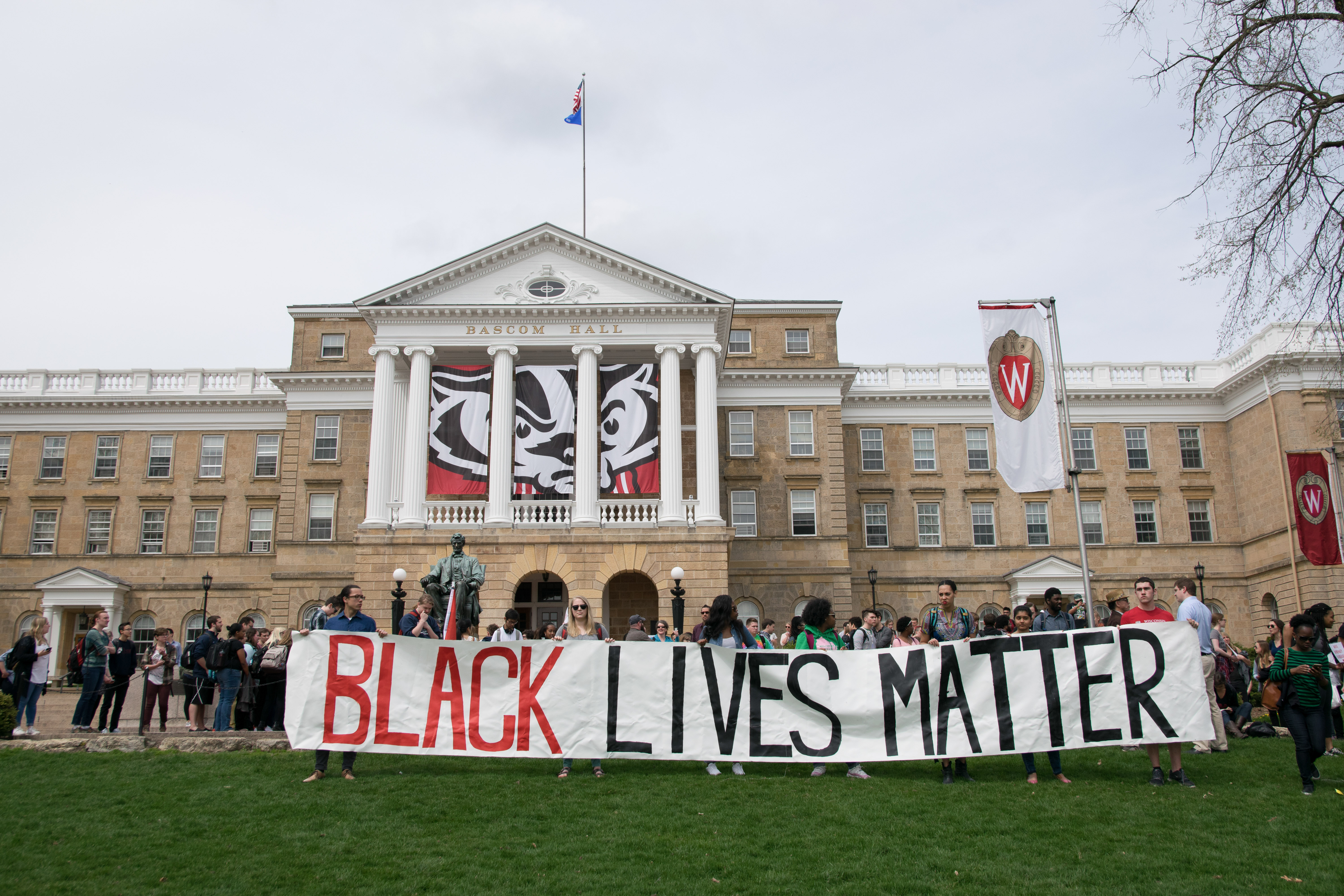 [UPDATED]: Hundreds of University of Wisconsin students, faculty and staff marched in solidarity with Denzel McDonald from Bascom Hill to College Library to University Avenue Thursday.

The protesters demanded school administration and police drop the charges against McDonald, also known as King Shabazz, who was pulled from class by University of Wisconsin Police Department and arrested in connection to multiple counts of graffiti April 14.

Student leaders from Freedom Inc., an organization that works to end violence against communities of color in Dane County, Black Liberation Action Coalition, a coalition between black activists at UW and in the Madison community, and UW’s Teaching Assistant Association led the crowd.

Michael Davis, a UW graduate student and member of Freedom Inc. and BLAC, listed protesters’ demands. The demands included that charges against McDonald be dropped, that UWPD return possessions to McDonald and allow him to return to class so he can graduate in May and that Chancellor Rebecca Blank, Dean of Students Lori Berquam and any officers and administrators involved in the arrest resign. Protesters also called for community control of UWPD, which would include student and faculty advisors.

“There’s a lot of power here, there’s are lot of emotion,” Davis said. “We are attempting to get the word out, and the most imperative aspect is the demands. This is just one action, there is more action to come based on whether the university meets our demand or not.”

Protesters held up signs of “Drop the charges,” “Education not incarceration” and “White supremacy iz a disease,” while chanting “No justice, no peace” as they marched down Bascom Hill to the entrance of Helen C. White.

Sergio González, co-president of Teaching Assistants’ Association at UW, said after the past year of racist incidents, including the death of Tony Robinson, #TheRealUW and hate and bias crimes on campus, TAA felt the need to stand in solidarity with undergraduate and graduate students who organized the rally.

UW’s Department of Afro-American Studies released an open letter April 18 to students of color on campus, providing support and calling on faculty to respond to the crisis.

Timing the rally at 11:30 a.m. was chosen based on the exact time Denzel McDonald was arrested in class last week, as a symbol against police racism in the classroom, González said. School administration and UWPD haven’t properly investigated the recent string of racist and hate crimes at UW, yet they arrested a black student in the classroom because of graffiti, he said.

Upon entering College Library, the crowd formed a circle with rally organizers in the middle, leading chants with a megaphone in front of a “Black Lives Matter” banner.

“This is our library, fuck white supremacy,” Alix Shabazz, a member of Young, Gifted and Black Coalition, led the chant.

Bianca Baldridge, assistant professor of Educational Policy Studies, gave a speech to the rallying crowd in the library.

“I’m appalled at the ways black students and other students of color are treated on this campus,” Baldridge said. “They’re constant victims of physical and emotional violence at the hands of UW police, other students, as well as faculty.”

Baldridge urged school administration to take a stand against racism, sexual assault and any other forms of harm on campus.

The harm to students of color is further inflicted when the school administration “refuses to condemn racist actions and does not extend the same compassions to all students on this campus,” Baldridge said.

The crowd stopped at the intersection of University Avenue and Park Street, blocking traffic.

Katie Zaman, a graduate student in sociology and an organizer in TAA, said McDonald’s arrest in class is a manifestation of white supremacy in UW. She said the rally will hopefully raise enough awareness to mobilize the university administration and police.

“I’ve been on this campus for almost nine years, and it’s really good to see a movement for racial justice start to form,” Zaman said. “I really hope we don’t have to go through this ever again.”

The protest remained peaceful and no arrests were made, according to a statement from UW.

Thanks to all who are fighting for a better UW. Here are my thoughts on today’s anti-racism protest: https://t.co/NnlYAngMcE #TheRealUW

“Embedded in the student demands are requests for actions that I do not believe are reasonable, or even lawful, for me to take,” Blank said.

UWPD’s stance has not changed since they issued an apology for entering the classroom to make the arrest and released the body camera video, Marc Lovicott, UWPD spokesperson, said.

“We responded already,” Lovicott said. “We made an apology for entering a classroom, that was a mistake, and that’s what this is about. We still stand by the arrest. Unfortunately our officer that went into the classroom made a judgement error, and that’s the extent of our issue with this entire ordeal.”

Lovicott said UWPD investigates every incident reported to them, and race is not involved in the decision. No one in the police department will be resigning, he said.

University Communications will issue a statement in response to the list of demands students make, Lovicott said.