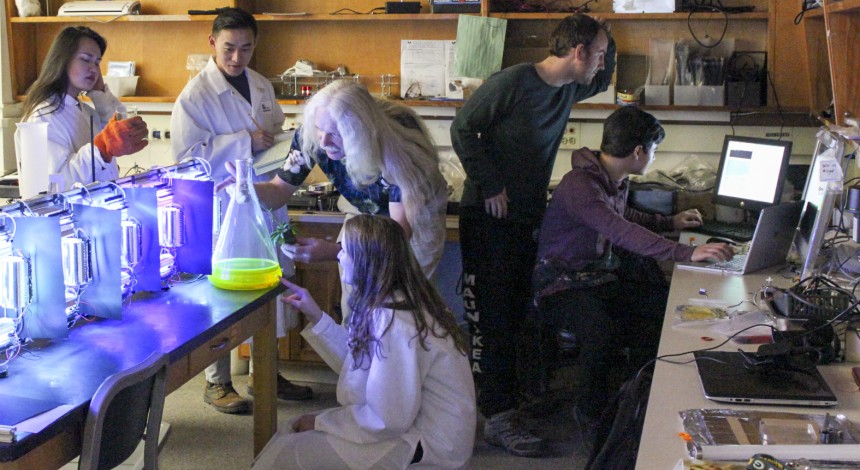 Taking his research and questions to space, a University of Wisconsin faculty member now works closely with NASA to study how environmental stress on earth affects plants.

For the last few years, botany professor Simon Gilroy and his lab have been studying environmental stress on earth.

In 2014, Gilroy’s lab sent 1,002 seeds up to the international space station to grow in the dark for eight days in Biological Research in Canisters, or BRICs. The seeds were then chemically preserved and brought back down to earth to be compared with the control seeds concurrently grown and preserved in Gilroy’s lab.

An open BRIC canister showing 5 PDFU and the HOBO data logger in the corner spot, courtesy of Gilroy’s Lab.

The actuator tool used by astronauts to inject liquids into the petri dish compartment of the PDFU, courtesy of Gilroy’s Lab.

Once the seeds were back on earth, Gilroy and his team sent the seedlings over to UW’s Biotechnology Center to map more than 30,000 data points to record the genome of the plants.

Comparing the space plants with the control group will help the scientists create a fingerprint to be used to understand the impact of microgravity and radioactivity on seedling growth, Gilroy said.

Richard Barker is a postdoctoral research associate working in Gilroy’s lab. He made his way to UW from the United Kingdom to fill a research position with one of Gilroy’s fellow scientists. Barker arrived in Madison on the crest of a wave of the new technique known as RNA sequencing. Working in the Biotechnology Center with this technique helped Barker develop the skills to analyze the patterns found in genome sequences that lead him to Gilroy’s lab.

Understanding how the physical force of how gravity works, or rather, doesn’t work in space, is helping scientists on campus and at NASA learn more about growing seeds in space, Gilroy said.

“In the absence of convection in space, liquids and gases behave differently,” Gilroy said.

Imagine lighting a candle. Upon taking a match and igniting the braided cotton wick, a shapely teardrop appears as radiation works to pull the flame outwards, and convection draws the little light to a point, reaching for the ceiling. This is the work of the lighter gases, hydrogen and carbon dioxide, tugging the flame up as they rise.

But, light a candle in space and in the absence of gravity, the force of radiation would reign dominant, reducing the flame to a simple, round ball of light. This is known as a diffusion limited flame, Gilroy said.

If fire becomes round in space, water becomes sticky. When gravity isn’t around to draw the liquid down through the soil to the roots of the plant, keeping the plants hydrated proves difficult.

Gilroy said watering the seedlings of his experiment requires feeding the plants directly through syringes to the petri dishes cradling the specimens. But because of water’s sticky properties, the experimental space plants seem to experience something known as “flooding stress,” a response similar to drowning.

But it’s not just plant biology, Gilroy said, that takes a toll in space. It can also be very tough on people, both physically and psychologically. Gilroy detailed how caring for plants in space can improve mental state, recalling one astronaut, Don Pettit, who created a blog for the vegetable he grew in outer space: The Space Zucchini.

Gilroy’s lab will send their third experiment to space at the end of this year or early 2017 from the Kennedy Space Center in Florida. Building on the complexity of the last experiment, the next batch of seeds will spend 12 days growing in space under artificial light, Sarah Swanson, who runs the lab’s logistics, said.

Just as Gilroy attributes his passion for botany to the great professors during his time in university studying zoology at Cambridge, he is serving as a mentor to students of his own.

“His enthusiasm is intoxicating,” Barker said. “It’s a great environment to work in and students have really succeed under Gilroy’s direction.”

In fact, Gilroy was just named one of UW’s postdoctoral mentors of the year and one of his former students, Gioia Massa, is heading NASA’s endeavor to find the best ways to grow plants and produce oxygen in space for long-distance travel.

Both Gilroy and Barker agree that it’s amazing to be in a lab at UW and doing stuff that used to be science fiction.