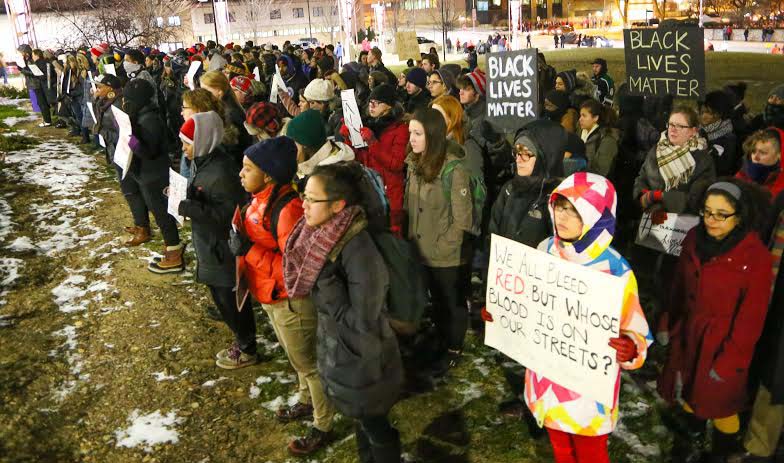 As students and Badger fans filed out of the Kohl center Wednesday night after the Badger basketball game against Duke, they were met by more than 100 University of Wisconsin students standing in silence.

Some of the students carried signs. One read “Black lives matter.” Another expressed that being black does not equate to being a “thug.” The event, a silent vigil to pay respect the victims of police brutality was organized in light of recent events in Ferguson, Missouri, and Staten Island, New York. 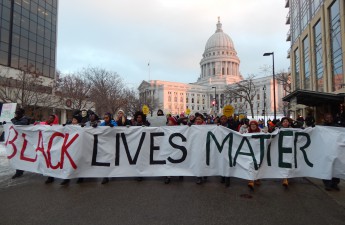 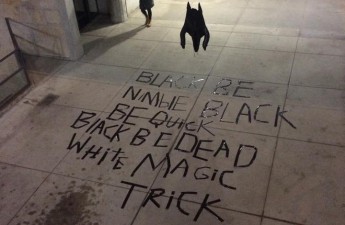 Art installment made by students addressing race issues destroyed within two hours of its unveilingTwo hours after its creation, passersby destroyed an art installment reacting to the event at Ferguson, which was made by Read…

During and after the Badger basketball game against Duke, UW students gathered on the field outside the Kohl Center to collectively honor Michael Brown, Eric Garner and all that other victims of similar injustices, Eric Dwayne Newble Jr., the UW student who organized the vigil said.

“When I found out about [the Darren Wilson indictment], I was really feeling like I wanted to get people together, because I felt like a lot of people in Madison who were reeling from that event, but didn’t feel like they had an outlet or community that was visible in that way,” Newble said.

After working through some hurt feelings and talking to peers, Newble found out about the basketball game, he said.

Once Newble knew how important this game was to students, he decided he had no choice but to do something for those who were affected by the indictment on campus, he said.

While it may seem as though Ferguson is far away from anything happening in Madison, Newble said most people do not realize Madison is one of the worst cities for African-Americans to live according to the 2014 Race to Equity report.

“It seems like, because we’re here in Madison, things like Ferguson don’t affect us because we’re not there, and that’s not our reality. Nor is it the reality of that many people that we know,” Newble said. “However, here, those kind of issues that are affecting Ferguson are very alive and well here.”

While most people just looked and respected the vigil, there were some who yelled in response. “You’re just denying the truth,” “Get a clue” and “That’s not what happened, learn your facts,” could be heard over the crowd while the students on the field stayed silent.

UW student Cara Whelan, who attended the vigil, said a lot of people said “offensive things,” which were upsetting to those who were involved with the event.

However, Whelan added that she finds encouragement from the support around the country, showing that people care even though it is not happening here, Whelan said.

UW student Caitlyn Veto said it was “amazing” to see people gather in Madison, adding that even though Wisconsin is geographically far from Ferguson and New York, people around the country care.

“Even though [participants] get the bad slurs, there are still people walking by who are [supportive], and it’s really important to showcase in this kind of event,” Veto said. 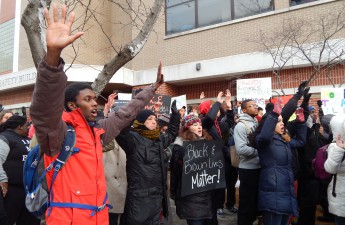