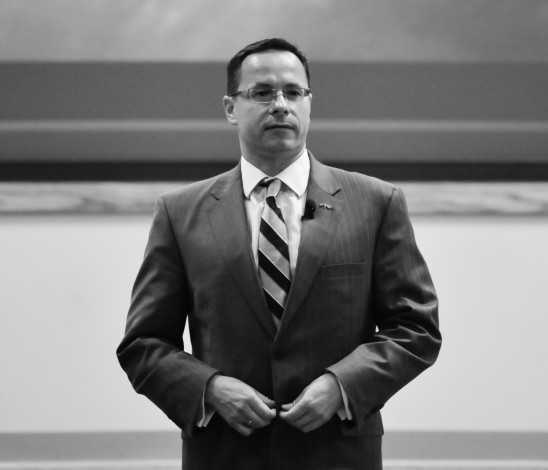 Highlighting the importance of raising awareness and fighting for freedom, the Lithuanian ambassador to the United States spoke at the Pyle Center Friday on Lithuanian economic and political policies.

Žygimantas Pavilionis became ambassador of Lithuania to the United States in August 2010 and played a key role in helping the country become part of the North Atlantic Treaty Organization and the European Union.

Pavilionis showcased Lithuania’s success as a nation, speaking on its promising numbers regarding economics and education.

Pavilionis presented Lithuania’s history as a nation and how it was affected by Russia’s dominance and communism. The United States was also involved, with Reagan’s push against communism during his term as president.

Reagan created a “holy union” as they say, to fight communism, Pavilionis said.

He said Lithuania was the first country to revolt against the Soviets and breaking away from the communist system was partly due to free trade.

“[After] being completely paralyzed by communist systems, [through] free trade first with Nordic countries, then the European Union, we created the miracle,” Pavilionis said.

Lithuania is looking to add the euro as its form of currency and it will be introduced on January 1, 2015, Pavilionis said.

“We are a very open economy, and we need financial stability,” Pavilionis said.

Pavilionis said the U.S. and nations within the EU need to maintain a bond in order to keep a “transatlantic family” that fights for freedom and against the rise of dictatorships globally.

He highlighted the importance of trade and the use of shale gas to maintain a bond between free western countries.

“A lot of countries have it, but Europeans are afraid to use it,” Pavilionis said. “We are pushing hard to use it. And we will.”

Within Pavilionis’s agenda as ambassador is enlarging the area of free nations in the eastern areas of Europe.

When Putin believed other countries might follow the lead of successful Lithuania and Baltic countries in joining the EU and NATO, he started boycotting goods from countries surrounding Russia, Pavilionis said.

“He used corruptive methods,” Pavilionis said. “After all those clashes [between Russia and surrounding countries], [we] still have free countries moving West, but they are under attack today.”

Pavilionis also pointed to the importance of raising awareness and said neither the U.S. nor Lithuania could ignore what is going on in other countries if they do not want violent leaders to spread anti-democratic leadership.

They must avoid becoming internalized in order to maintain leadership, Pavilionis said. By reaching out to other nations, learning from them and cooperating with them, they will remain strong, he said.

“Stay inside the country and think nothing, and your freedom will disappear,” he said. “We have to revamp public diplomacy. We have to fight for our freedom with ideas that were born [in the US] years ago.”