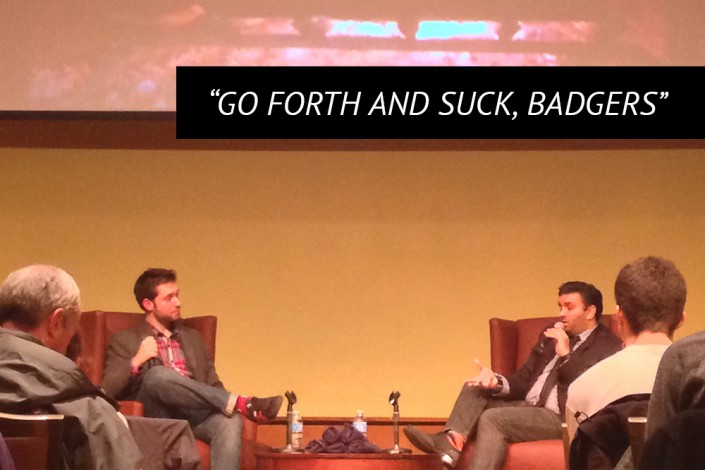 Alexis Ohanian, co-founder of Reddit and serial entrepreneur, gave students one takeaway message in his talk on campus Thursday: “Go forth and suck, Badgers.”

Ohanian was joined by Nilay Patel, managing editor of The Verge and a University of Wisconsin Law School alum. Ohanian said he likes to bring alumni on stage at the schools where he speaks to show students what they are capable of.

Ohanian encouraged students not to give up on their ideas on the first try. He said the first version of every big project is “janky,” showing the crowd the first ever post on Reddit, the website he co-created. Reddit is now one of the most viewed websites on the internet, boasting 4.5 billion page views last month.

Both Patel and Ohanian emphasized the potential for millennials to change the world using the Internet as a platform.

“We’ve managed to put a computer in everyone’s pocket….and that is actually our unifying culture,” Patel said.

Ohanian, who had planned to become a lawyer, had an “epiphany” his sophomore year in college, after ditching studying for the LSAT to go to a Waffle House.

“I realized, I wanted these waffles more than the LSAT,” Ohanian said. “So I probably shouldn’t be a lawyer.”

He went on to join Y-Combinator’s first ever session where he developed the first version of Reddit. Four months into Reddit’s existence, Ohanian and his cofounder Steve Huffman were asked to take a meeting at Yahoo.

The executive they met with, Ohanian said, told the duo their website was a “rounding error” in comparison to Yahoo’s readership. He said this moment has motivated him every day since.

“I wanted to know exactly who we were proving wrong,” Ohanian said. “I want to meet [the executive] again, and I want to thank him, because he has done so much for me.”

How’s that for karma?

Patel, who quit his law office to do what he loved, encouraged students to chase their big ideas. He said students today have the opportunity to “build the next generation of business.”

Patel said The Verge, of which he is now the managing editor, pushes the boundaries of news, and he urged student journalists to do the same. He said the internet gives young writers the power to do what they want and said students should take advantage of that.

“You have wide open territory to tell people what you think,” Patel said. “And you can be as loud as you want.”

Ohanian did not comment on the size or quantity of horses or ducks he would fight.