Governor Tony Evers announced Monday morning that he will be issuing a new order regarding COVID-19. The “safer at home order” will take effect Tuesday. It encourages citizens to stay in their homes — unless for essential purposes like getting groceries or medical attention.

A tweet from Evers said the state advised to close all “non-essential businesses” for a period of time.

Schools have closed and long term care centers have already been placed on lockdown.

A Journal Times article said the order will somewhat mirror the “shelter in place” orders in states like Illinois.

Another tweet from Evers said to pay increased attention to hygiene and continued to advise less travel. But, Evers encouraged people to prioritize activities that are good for mental health like walking their dog, as long as they stayed away from others. 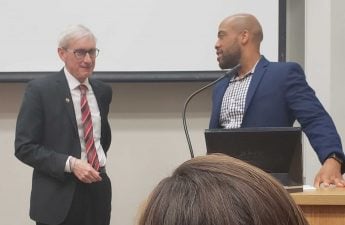 The Journal Times said the Wisconsin legislature did not know about the governor’s decision until he announced it to the general public.

According to the New York Times, the point of decreasing exposure is to cut down on those in need of hospitalization, because the U.S. currently lacks the capacity to care for a very large sick population. The New York Times also said that if exposure to COVID-19 is reduced, this would mean fewer deaths and a gradual reduction in new cases.

Wisconsin steps up testing for coronavirusWisconsin public health officials announced Monday during a press conference the state is stepping up its testing for COVID-19, and Read…

The Journal Times said Wisconsin has also begun operating mobile testing sites. Those unsure of having the virus are required to answer pre-screening questions prior to testing which determine whether a test should be run.