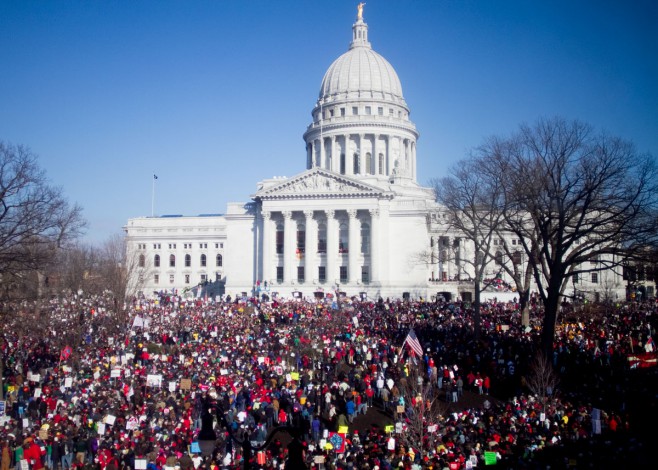 Five years ago, around 100,000 protesters flocked to Madison in opposition of Gov. Scott Walker’s Act 10 education reform, a “budget repair bill” that has reportedly decreased taxes, but lead to a “mass exit” of teachers from the educational field in the state.

Act 10 requires most government employees, including teachers, to contribute more money to their retirement pensions and health insurance. State and local employees used to negotiate with unions about these costs through collective bargaining, but Act 10 eliminated most of these interactions with unions. The bill caused months of protests at the Capitol and still today has received mixed reviews.

Laurel Patrick, Walker’s spokesperson, said in an email to The Badger Herald that the goal of Act 10 was to fix the $3.6 billion deficit in Wisconsin’s budget in 2009.

Proponents of the measure, including Chris Rochester,  Maclver Institute spokesperson, said Act 10 has saved taxpayers $5.24 billion. These taxpayer savings come from government employees putting more money into their own retirement and health benefits, of which taxpayers previously pay a significant portion, Rochester added.

“Act 10 asks for relatively modest contribution to one’s own retirement — kind of like what most people in the private sector have to do,” Rochester said.

But Christina Brey, Wisconsin Education Association Council spokesperson, said even before the 2011, reform teachers and other government employees still contributed funds to their health care and benefits packages. She said the reason teachers had less expensive benefits than those in the private sector was to make up for the fact that teachers were paid less in salaries.

Effects on the education system

Act 10 has affected teachers in a negative way, not just economically, but also in the classroom, Brey said.

“We have seen some of the largest cuts to public school funding in the nation,” Brey said. “Wisconsin has fallen below the national average in per pupil spending for public school students.”

Teachers, however, are not making enough money in public education and are being forced to work in the private sector, Brey said. This is threatening the quality of education that Wisconsin students are receiving, she added.

“More educators are leaving the field,” Brey said. “We saw a mass exit of educators retire in wake of this policy as well as a lot of turn over in our public schools, especially in rural communities.”

Michael Apple, University of Wisconsin educational policy studies professor, said people have moved out of the field of public education because of the state’s lack of support for teachers.

“Schools now have the flexibility to hire and fire based on merit, they can pay based on performance, which means we can put the best and the brightest in our classrooms and pay to keep them there,” Patrick said.

Schools now have the ability to manage their budgets on their own, improve education and keep teachers in the classroom, Patrick said.

Act 10 lawsuit holds political implications in gubernatorial electionWith Mary Burke on the school board and Walker’s position behind the state’s collective bargaining law, the ongoing legal battle between conservative Read…

Apple said teachers act as far more than just educators for students and deserve more support from the state.

“We are asking teachers to be surrogate parents, health care workers, social workers, psychologist at the same time school districts are letting many of these people go, because they can’t afford them,” Apple said. “So teachers feel over burdened, increasingly disrespected and people staying in teaching is at great risk.”

While some educators think the elimination of unions has had largely negative effects, there is still a divide on the issue.

Alexandra Freeze, Association of American Educators spokesperson, said allowing teachers the freedom to have the choice of whether or not to join a union is a good thing because unions no longer have control over teachers.

From the perspective of AAE, Freeze said, forcing teachers to be a part of a labor union limits freedom of teachers. Labor unions do not always align with the opinions of teachers and the freedom to choose is important, she said.

Brey, however, said unions help both teachers and students.

“We are proud to say that we have regrouped, and we have learned to work in different ways,” Brey said. “We have learned that politicians in Madison are being influenced by folks who have more money then us.”

Brey said Wisconsin Education Association Council is focusing on grass roots local level by partnering with parents in new ways to promote students needs. Many schools are participating in a “National Walk in for Public Schools.” Brey said events like these show support for public schools and prove that teachers are the biggest advocates for public education.

The MacIver Institute has called supporters to celebrate the deficit reduction and funding cuts by introducing “Wisconsin Taxpayer Appreciation Month,” which runs from Feb. 11 to March 11.