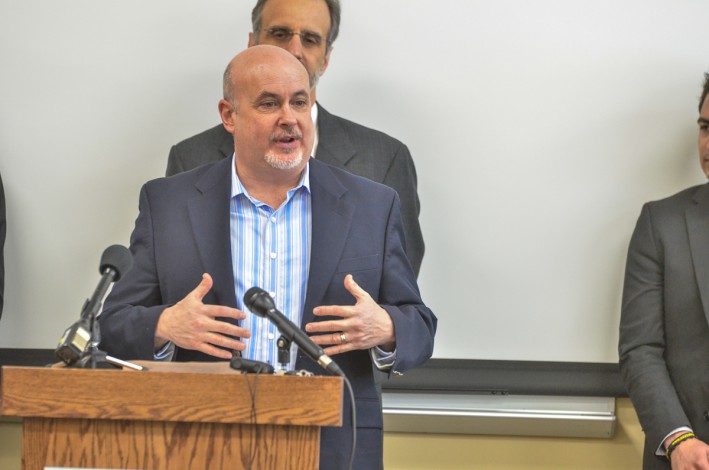 Pocan and Rep. Keith Ellison, D-Minnesota, are pushing a bill through Congress that would add a 28th amendment to the Bill of Rights with the explicit purpose of ensuring the right to vote for all U.S. citizens.

Pocan told reporters Thursday the fact that the Constitution has no clear protection for voting is often overlooked. The proposed amendment’s language is short, stating simply “every citizen of the United States, who is of legal voting age, shall have the fundamental right to vote in any public election held in the jurisdiction in which the citizen resides.”

Pocan said adding the right to vote to the Constitution would make it easier for citizens to fight legislation deterring this right in court.

Executive Director of Common Cause Wisconsin Jay Heck said passing a constitutional amendment is difficult and takes time. Heck said the bill’s inspiration hails from recent movements in some states to restrict the right to vote, including laws like voter ID, which requires state-issued photo identification at the polls.

Proponents who back voter ID law, which was upheld in Wisconsin last month, consider it a measure to prevent election fraud. Gov. Scott Walker expressed his support for the U.S. Supreme Court’s decision not to hear the voter ID law case in a statement.

“This is a common sense reform that protects the integrity of our voting process, making it easy to vote and hard to cheat,” Walker said.

Heck said the purpose of the Pocan-Ellison measure is to make it more difficult in the future to impede on voting, like the passage of voter photo ID laws, restrict or repeal same day voter registration or curtail the hours that a polling place is open.

“It would add to all the other arguments a constitutional argument,” Heck said.

Dane County Supervisor Shiela Stubbs is one of the Madison area officials who backed Pocan and Ellison at Thursday’s press conference to promote the bill. She said Dane County is not immune to issues stemming from voting underrepresentation and legislation aimed to curtail voting.

Stubbs said voting gives people a say in choosing leaders with similar values, and when this is infringed upon it is a violation of freedom.

“[With this bill] we can give all citizens the opportunity to have a voting opportunity,” Stubbs said.

Heck said the amendment will give people who see a problem with the way elections are run in the United States something to mobilize around and push for that they can do proactively, instead of working on the defensive. For example, legislation like voter ID could be challenged as a direct violation of the constitution, Heck said.

Stubbs said Wisconsin has seen a number of efforts to restrict voting, such as voter ID, and often leads the charge on issues like this.

“We have been a leader in so many capacities, and so the place and timing is perfect,” Stubbs said.

Pocan’s partnership with Minnesota representative Ellison is important because an alliance between the two states makes the bill more powerful, Stubbs said. She said Minnesota and Wisconsin are often compared and face a lot of the same obstacles when it comes to voting issues.