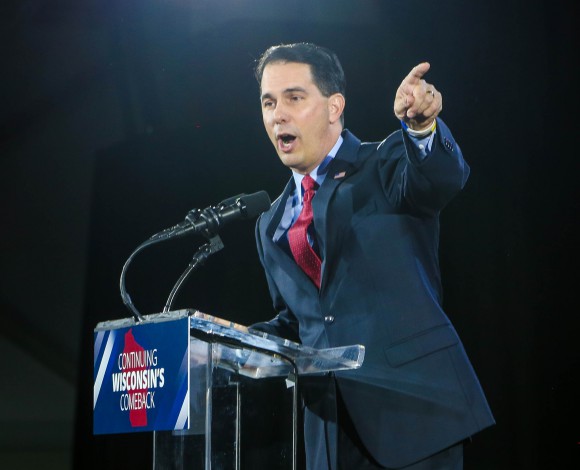 Gov. Scott Walker’s office hit back on a Yahoo News report outlining a $1.5 million contribution from the richest man in Wisconsin to a group that’s aligned with Walker’s policies.

The report highlights a 2012 donation of $1.5 million from Wisconsin billionaire John Menard Jr. to the pro-Walker advocacy group Wisconsin Club for Growth.

That group is part of a currently-halted John Doe investigation that is looking into whether there was any illegal coordination between it and Walker’s 2012 recall campaign.

Issue advocacy groups like the Wisconsin Club for Growth don’t have to release the names of people who donate to them and often use those donations to fund advertisements on issues Walker supports, but they can’t outrightly tell people to vote for Walker, according to Common Cause in Wisconsin Executive Director Jay Heck.

But Heck said those issue ads remained influential during Walker’s 2012 recall election and provided something of value to the campaign without disclosing donors, so it should be considered illegal coordination.

“Under Wisconsin state law, it is illegal for a candidate campaign to coordinate with outside groups during an election without reporting who their donations are from,” Heck said.

Conservatives say the investigation has limited the advocacy group’s freedom of speech and have called it a political witch hunt — and have also denied there was any coordination.

“Menard gave money to WiCFG thinking nobody would find out and then received tax credits, benefits and favorable rulings from the Department of Natural Resources,” Heck said.

In the past, Heck said, Menard has had problems with the DNR but since the donation, DNR has been more relaxed under Walker.

But Walker spokesperson Laurel Patrick said in a statement that Walker has had no involvement in changing the DNR’s enforcement methods nor had anything to do with Menard’s tax breaks.

She said the tax breaks were solely based on performance objectives such as job creation, job retention and capital investment and were handled by the Wisconsin Economic Development Corporation without Walker’s involvement.

David Canon, a University of Wisconsin political science professor, said this level of funding could decrease accountability and “lead to improper favors.”

Canon said if Walker chooses to run for president, the issue won’t go away in the Republican primaries.

“This will come up again and there will be a lot of issues on this,” Canon said. “Any Republican [primary rival] will want to bring attention to it.”