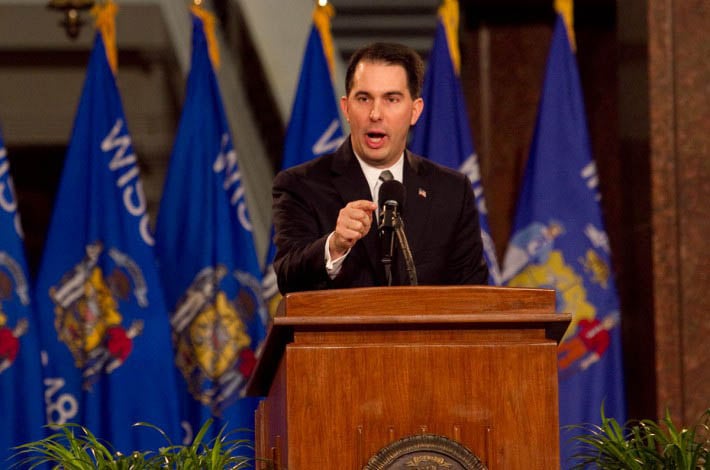 Some are raising concerns that Gov. Scott Walker could be involved in campaigning activities pertaining to pre-candidacy for presidency without having declared it.

If Walker was in the pre-candidate phase, then by law, individual donations to a campaign group would be limited to $2,700. Walker’s new political group, Our American Revival, can receive unlimited funding from individuals and corporations and is used to promote Walker’s ideas, but not him as a possible presidential candidate. Our American Revival is a 527 group, which means it is a tax-exempt organization created to influence the selection of public officials.

However, the kind of activities the group has undertaken seem to reflect those of a pre-candidacy campaign organization, said Jay Heck, the executive director of Common Cause in Wisconsin.

“What they [Our American Revival] say is they are promoting ideas,” Heck said. “Now the ideas they promote conveniently happen to feature Scott Walker and he happens to be in communication of these ideas. A person’s ideas are not very different from the person itself.”

Our American Revival spokesperson Kirsten Kukowski said to the Wisconsin State Journal that Walker “is not a candidate for federal office and he isn’t in a pre-candidacy phase.”

“(Walker) has built an organization tasked with building an issue environment and platform for candidates in 2016,” Kukowski said in an email. “IF he feels his policies are resonating, THEN PERHAPS he enters a pre-candidacy phase and THEN PERHAPS a candidacy phase.”

Heck said this is a loophole to the federal law. Walker is able to promote himself and act as a presidential candidate and receive unlimited contributions, Heck said. This is unlike those who have declared pre-candidacy who can do the same but are limited to just $2,700 in contributions.

Kenneth Mayer, a University of Wisconsin political science professor, said it is difficult to conclude Walker’s communications with Our American Revival mean that he is certainly going to declare presidential candidacy. What candidates do with their campaigns is only a small part of the campaigning and people do not know what goes on outside of this, Mayer said.

“Campaign finance and all the activities that go on outside campaigns have become almost completely unregulated,” Mayer said.

Heck said this makes Walker’s activities with Our American Revival look secretive because it is unclear as to how strongly contributors will influence him and what they will want in return.

There have also been some lawsuits against Walker and his group’s activities, but the court will decide if his actions are illegal or not, Heck said.

“I personally think it’s kind of a sneaky way to do this,” Heck said. “If you wanted to run for president, you should set up the exploratory committee and be transparent about where the money is coming from and he doesn’t seem to think that’s important by choosing this route.”

Heck said $2,700 is a large enough sum of money for potential candidates, and Walker does not need the extra funding.

Mayer said Super Political Action Committees, which can engage in political spending independent of the campaigns with no funding limit, would be a good way to raise enough funds for campaigns if $2,700 is not enough. There should be more activity taking place through this channel, Mayer said.

“I would expect it to be soon; whether that means next week, three weeks from now or four weeks from now, it’s hard to say,” Mayer said. “But it’s not going to be six months from now for sure.”