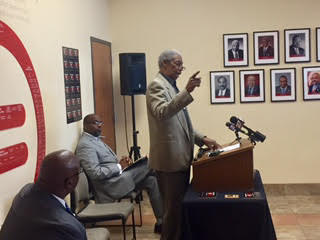 To encourage and empower more citizens to vote in the Nov. 6 midterm election, more than a dozen organizations in Madison, including its NAACP chapter, Urban League and 100 Black Men, have teamed up to create the “Roll to the Polls” initiative.

The goal of the initiative is to inform citizens on what they should bring with them to vote and how to register, and to help transport those without means to their polling place, according to an Urban League press release.

Greg Jones, president of the Dane County chapter of the NAACP, described the initiative as the chapter’s contribution to the “Get Out the Vote” movement.

“We’re getting the message out to communities that it is important to get out and vote,” Jones said.

“Roll to the Polls” will offer free rides to polling places on Nov. 6 with the help of Union Cab Company, the press release said.

The African American Coalition of Churches, led by Rev. Harold Rayford, will be utilizing all of the coalition’s vehicles  to take voters to the polls, too.

“’Roll to the Polls,’ means we are making all the African American church vans available to mobilize and get people to the polls who may have transportation as a barrier,” Rayford said. “This is not an election to be a spectator — we must be active participants and vote.”

The National Urban League recently put together its “Enough Is Enough. Vote!” campaign, which, according to the press release, highlights the civil rights they believe are under attack across the country.

Ruben Anthony, president and CEO of the Urban League of Greater Madison, said local organizations saw an opportunity to mobilize their community and tied the two initiatives together.

According to the Center for American Progress, Wisconsin saw 55.1 percent of eligible African American constituents vote in the 2016 election, which was down from the 74 percent who voted in the 2012 election. Jones said voting levels were down in 2016 because of strict voter ID laws.

“We cannot afford to let our voices be silent,” the Urban League press release said.