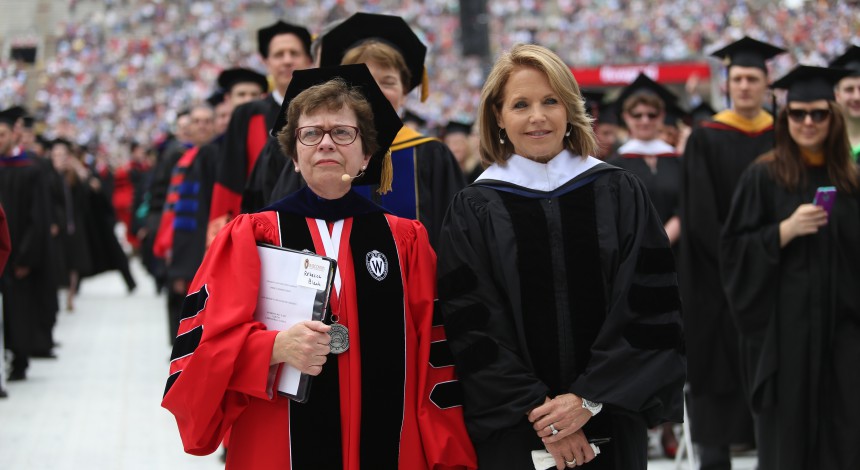 Former news anchor, 15-year veteran of the Today Show and philanthropist Katie Couric gave tips for success and happiness in what she described as the most rapidly changing times since the Industrial Revolution at University of Wisconsin’s Commencement Ceremony Saturday.

“We’re in the midst of breath-taking, head-swiveling change,” Couric said.

Couric now works as the Yahoo Global News Anchor and was the first female solo anchor of a network newscast.

Entrance to Camp Randall was delayed by about half an hour due to a severe storm warning, while graduates and their families waited in the Shell. Despite that, the ceremony started on time and without rain.

Chancellor Rebecca Blank noted the ceremony was the 150th anniversary of the first women to graduate from UW. The first women were met with resistance from many university officials and students, Blank said.

“Today we understand,” she said. “Our strength is our diversity.”

Blank congratulated the graduates, who by her calculation have collectively consumed about 400,000 gallons of Babcock ice cream during their undergraduate years. She suggested graduates continue the work they started at UW, but also take time to “unplug” and be with loved ones. 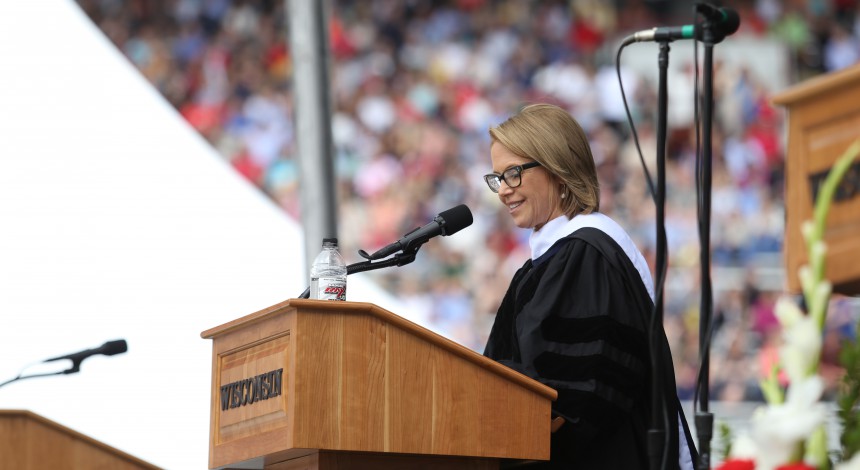 Couric began her remarks touting the importance of public universities and took a jab at Wisconsin lawmakers for the proposed $300 million cuts to the UW System, which will likely go into place beginning this summer.

Couric stressed persistence in the face of adversity, describing the struggles she faced as a woman in a male-dominated journalism scene. She told graduates to be ready for the unexpected and to be open to new experiences.

“The flip side of getting out of your comfort zone is being uncomfortable,” Couric said.

“If you hit a wall, try to go over it, through it or around it,” she said.

Amid jokes, Couric reminded graduates to “proceed with caution” in a rapidly changing, always connected environment. While she said social media is revolutionary and can give voice to the voiceless, Couric cautioned graduates to “tweet responsibly.”

“Be bold, be humble, be brave, be resilient, be productive, be good, good to yourselves and good to each other, be careful, be caring,” Couric said. “And even though you’re leaving UW-Madison, know you’ll always be a Badger.”