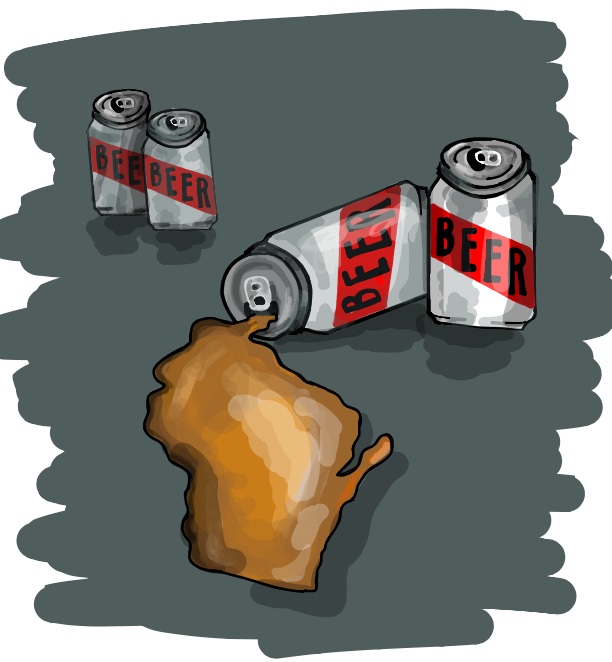 Many students at the University of Wisconsin wear the school’s high academic rankings as a badge of honor, especially since U.S. News recently named UW the 35th best university in the world.

Badgers may brag to their friends at other schools that UW holds high rankings academically — and they’ll probably mention the university’s prominent social scene as well, which was recognized as number three on Niche’s 2020 Top Party Schools in America list.

In addition to the rankings, UW students proudly throw the annual Mifflin Street Block Party at the end of April each year. But what is a point of pride for many students can also have some dangerous consequences.

Regardless of alcohol consumption, its frequency or even a lack thereof, the consequences of alcohol can be felt by all members of the UW community.

According to the National Institute on Alcohol Abuse and Alcoholism, excessive alcohol consumption can have serious consequences on college students. In addition to the obvious effects on grades, physical harm can also occur as a result of binge drinking.

Every year, approximately 600,000 college students unintentionally injure themselves due to excessive alcohol consumption, according to the Alcohol Rehab Guide. These injuries include bruising, fractures, muscle sprains and other physical harm that can occur because alcohol alters a person’s sense of rationality, causing them to take more risks.

Additionally, one in four college students report academic consequences due to alcohol consumption. This includes missing class, getting a poor grade on an exam or paper, or a lower grade in a course overall.

According to the Alcohol Rehab Guide, not only does binge drinking pose a risk to the drinker, it can also increase a person’s likelihood of committing a violent criminal offense, something the University has witnessed firsthand.

In March, a freshman at UW was charged with battery of an officer and resisting arrest after the UW Police Department responded to Witte Residence Hall for reports the student — whose blood alcohol content was 0.20 at the time of the incident — was urinating in the dorm’s hallway. While UWPD said this is a common call they receive, they also said students do not normally assault an officer.

According to Alcohol Rehab Guide, alcohol usage can also affect a student’s mental health, particularly if that student already struggles with depression or anxiety. A student who has pre-existing mental health issues can face “extreme mental instabilities” and “are most at risk of attempting to commit suicide or other acts of self-harm” because alcohol inhibits a person’s ability to think clearly.

Additionally, according to NIAAA the first six weeks of freshman year are critical because that is when a new student is in a completely new environment and has more freedom than ever before. This can make them most vulnerable to the more serious effects of binge drinking.

Amanda Jovaag, Director of Prevention and Campus Health Initiatives at UHS, said the campus community as a whole is at risk when students use alcohol excessively. Three key areas — safety, connectedness and belonging — are the most affected by students’ excessive alcohol usage, Jovaag said.

But, UHS focuses on the most prevalent short-term effects that students face, such as sense of community and binge drinking, Jovaag said. Healthy Campus Team Manager Katherine Loving works closely with Jovaag in an attempt to improve the climate on campus as well.

“[UW works to] center a culture of nondrinking and low risk drinking because again, a majority of our students are either nondrinkers or low risk drinkers, or are students in recovery,” Loving said. “I think that the high risk drinking on this campus is often the way the culture is interpreted, but that’s just what’s most visible.”

According to the UW-Madison Specific Alcohol Beverage Regulations, the University’s official stance is, “Alcohol beverages are considered an amenity for a social or business occasion and never the purpose or focus of the occasion.”

When it comes to University Housing, such as dorm rooms, the regulations state all assigned residents of a room and their guest must be of legal drinking age for someone to “…possess an open container of and consume alcohol beverages,” and they must do so only within their own room.

One common problem area for alcohol consumption on the UW campus is at the beloved Badger football games. Many students enjoy tailgating before heading to Camp Randall, and that often involves the consumption of alcohol.

According to the University, this program has made a positive impact because it allows students to continue to enjoy Badger football games, even if they have gotten in trouble due to alcohol usage. The program also prevents those students from re-offending at a future game.

Many students have that story about a “friend of a friend” or “that person on their floor freshman year” who was sent to detox — or the detoxification center at Tellurian, according to UHS. The student’s phone is confiscated when they get to detox and they are taken to a room where they are monitored by Tellurian staff until they are sober and released from the facility.

According to University Health Services, a trip to detox costs $595. Additionally, students who go to detox may receive an underage drinking ticket that carries a minimum fine of $263.50 and may also have to complete an online class regarding alcohol usage that costs $125 as part of the sanction they will likely receive from the university.

Given all of the possible consequences when someone binge drinks, it is worth it for students to carefully think about their decision regarding alcohol consumption, something UW is attempting to ingrain in students’ minds.

One well-known effort UW makes to inform students about alcohol usage is AlcoholEdu. Every new student at UW — both first year students and transfers — must complete the program. Otherwise, a hold is placed on the student’s academic record, preventing him or her from registering for the next semester’s classes.

AlcoholEdu is completed in two parts. Part one is due approximately one week before classes begin and part two can be completed 45 days after part one. Students cannot register for the next semester’s classes until part two is complete.

According to UHS, AlcoholEdu aims to “challenge students’ expectations about alcohol while enabling them to make healthy and safe decisions,” in addition to making the connection between alcohol usage and academic success clear to new students.

Another key aspect to changing the drinking culture on campus and keeping students safe is to properly communicate the importance of appropriate alcohol usage to students, Jovaag said.

Alcohol usage at UW does not only affect students in their personal lives — the city has also recognized the issues it can bring into the downtown area.

While there has always been a culture of drinking — and some crime as a result  — major crimes in downtown Madison have spiked within the past few years, Freedman said. In the past, there has been more minor crimes like disorderly conduct, noise complaints and urinating in public. Now, MPD has seen an uptick in crimes like felony battery, sexual assault and weapons offenses.

“Our efforts, we believe, have led to an overall improvement and some mitigation, but has also led to some displacement and these are issues that really can’t be solved by police enforcement,” Freedman said. “We can control the fire a little bit and we can maybe move it, but we can’t put it out and we certainly can’t change the conditions on the ground that have made the fire so dangerous.”

In an attempt to curb these more major crimes, Freedman said MPD and the city worked together to establish the Downtown Safety Initiative. DSI brings in around 12-15 officers to cover a small portion of downtown — mainly in the State Street/Gilman area. These officers work overtime from 11 p.m. until 3 a.m. to handle the increased likelihood of crime and make officers more visible and available, Freedman said.

Additionally, Freedman said, MPD works closely with the Alcohol License Review Committee and the city council in an attempt to adjust the placement of late night food carts that tend to attract a large number of people in the streets and on the sidewalks.

On the flip side, when UWPD officers are present, it is mainly because they are responding to a call, UWPD spokesperson Marc Lovicott said. Campus police do not aim to patrol with the purpose of finding underage drinkers, but they will patrol through residence halls making sure students are safe and well-behaved.

In an attempt to curb underage drinking, an issue Lovicott also said is part of the UW culture and society, UWPD aims to focus on educating students when they get on campus. Lovicott said UWPD meets with first year students in their house meetings to explain the rules regarding drinking in the dorms and give advice to students for the safe consumption of alcohol.

“This is an issue that we know is impacting our community and it’s been an issue here for a long time,” Lovicott said.

Safe drinking for the school year

While there are always inherent risks, students can still safely enjoy a night out at one of the country’s best party schools.

Freedman suggests those who want to enjoy alcohol should use caution when consuming it. He also advises students know what they are drinking and refrain from accepting drinks from people they don’t know as there could be more than alcohol in the cup.

He also added that students should go out and go home in groups, rather than alone. Going home alone — especially when intoxicated — increases a person’s likelihood of being assaulted or robbed, he said.

“Know your limits,” Freedman said. “I’m not saying drink responsibly, but if you’re drinking to the point of blacking out, that’s a you problem and that’s something that, from a cultural standpoint, we need to do better on.”