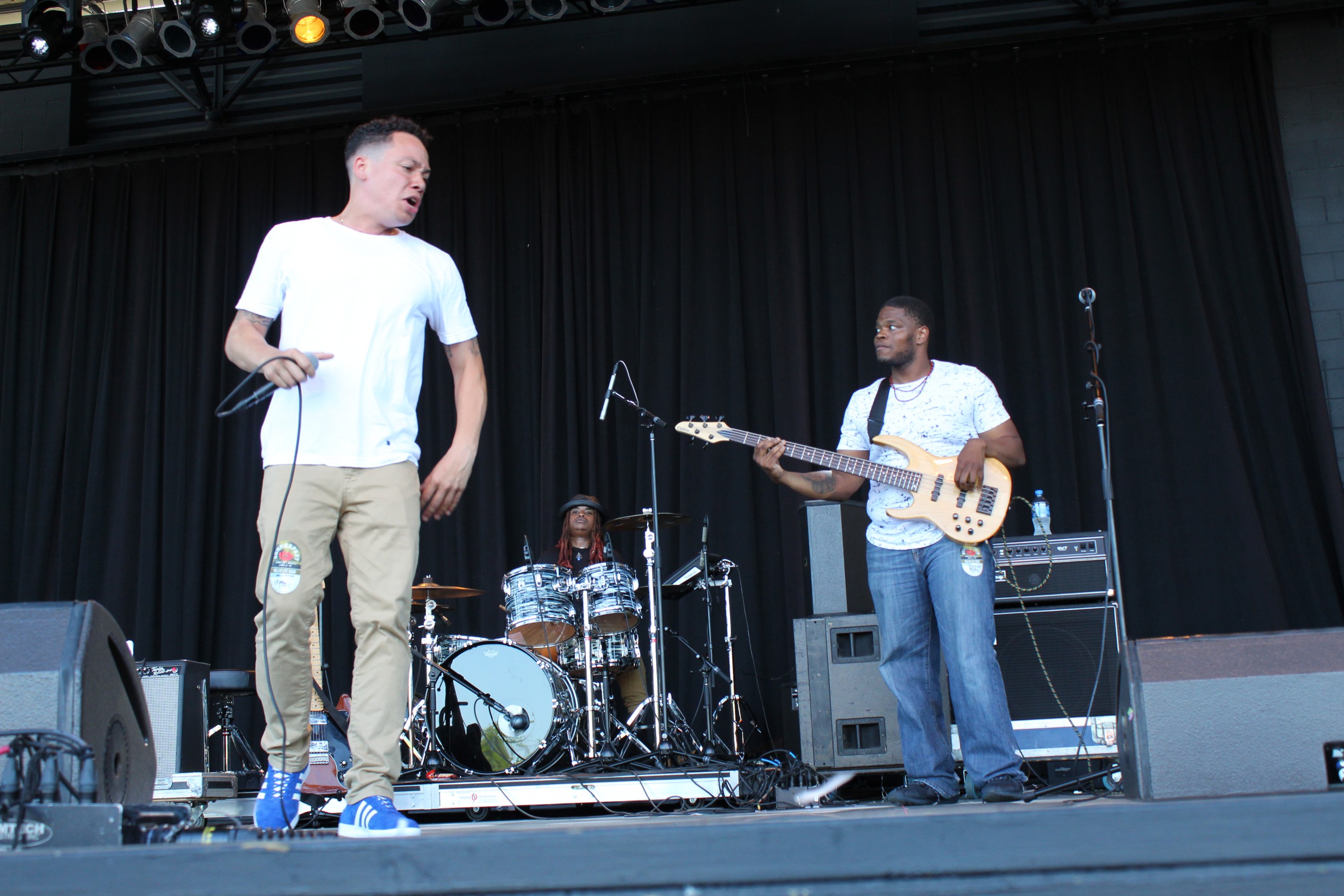 Big names at the “big gig” were not limited to the fancy amphitheater in Henry Maier Festival Park on Friday evening.

With a heat index of 105, sitting on the Summerfest bleachers completely still was the equivalent of jogging in a sauna. That didn’t stop Maceo Haymes from sporting baggy khakis with a gallon jug of water in hand as he took the stage with soul-rock juggernaut, The O’My’s.

Although the group has been on music lovers’ radar since 2011, the band remains relatively unknown. Boasting features with Chance The Rapper, Wyclef Jean and Ab-Soul, the Chicago musicians proved why those big names want to work with the vintage sounding artists to begin with. 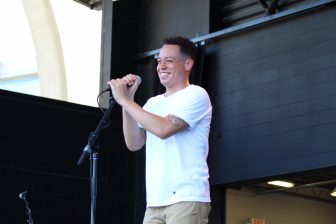 Haymes’ voice to the ear appears to be fixed with auto-tune until you actually hear him croon live. As he wound up the cord to his microphone, the crowd eagerly awaited how the sound engineer would modify his voice for a live set. To the surprise of the Milwaukee audience, Haymes belted a smoky rasp along with breezy falsettos with nothing but the microphone to his lips and his left palm pressed to his chest.

Of course, Haymes wasn’t by himself on the Oasis stage. Keyboardist Nick Hennessey was as smooth as his last name without an extra vowel as Haymes granted him a solo on “Smoke Killa.”

Bassist Boyang Matsapola stole the show with his talk box, an instrument that alters the frequency of your voice and applies the same sound to the physical instrument you are playing. For Matsapola, this wasn’t limited to his bass guitar, but the high rise keyboard placed in front of him. 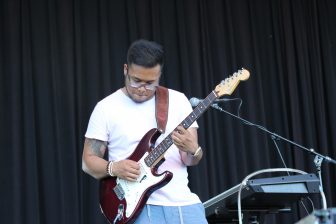 Matsapola steps away from the talk box for a bass solo.
Jeremy Frodl/The Badger Herald

Following the impressive performance by The O’My’s, another notable Chance The Rapper feature artist from Chicago took the stage. Knox Fortune, aka Kevin Rhomberg, was quick to remind the sweating crowd how to survive the heat. “Stay hydrated y’all.”

The wise words were proceeded by songs from Rhomberg’s latest project, Paradise. The Oasis stage crowd, on the other hand, was far from experiencing bliss.

As DJ NuStylez would fill the stage in between sets, the build-up of rap and trap mixes had the crowd ready for an upbeat performance to follow. Knox Fortune, unfortunately, fell short. The indie rock and pop singer stayed true to himself, which wasn’t what the energized music fans were getting riled up for.

The Summerfest crowd went from standing and jumping on the bleachers in anticipation to sitting on metal. It didn’t help to tease a potential Joey Purp appearance, “wish we could have brought him out.” 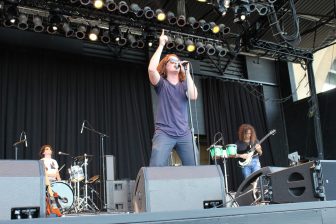 The biggest name that would grace the Oasis stage was not an artist listed in the promotions of Summerfest. Knox Fortune was kind enough to get music legend Peter Cottontale to accompany him for his set. The former Social Experiment member bounced from the keys to the guitar before finally contributing vocals for Rhomberg. 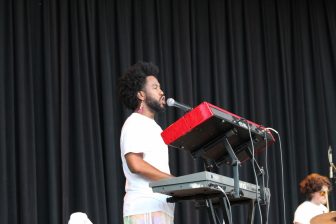 The set got its first notable positive reaction from the crowd with the signature hit from Chance The Rapper’s Coloring Book, “All Night” though most of the crowd had already left for another stage or to check out the Milwaukee Bucks festivities on the other side of the pavement.

As the sun set at Summerfest, a young man by the name of Xavier Omär represented San Antonio through beautiful original love songs.

Dressed in denim and sunglasses, Omär had many in their feelings, even after a certain Canadian superstar had done the same with his latest release. “Sorry if I made you think about your ex, but Drake already did that,” Omär joked. 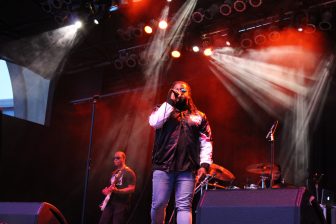 Mainly playing records off his EP Pink Lightning, Omär began the set with a calm tempo, asking the audience to slow dance or two-step. Although still not the intense performance the crowd was longing for, Omär would satisfy the demand with the second half of his set.

Mixing songs off his 2016 release The Everlasting Wave, Omär’s  band somehow brought more heat to Milwaukee, with hi-hat’s from his drummer along with a short rap on “Grown Woman.” Omär kept everyone on their feet to finish his set, as he walked off with a replica wrestling belt, alluding to a victorious performance, perhaps winning a heavyweight championship.