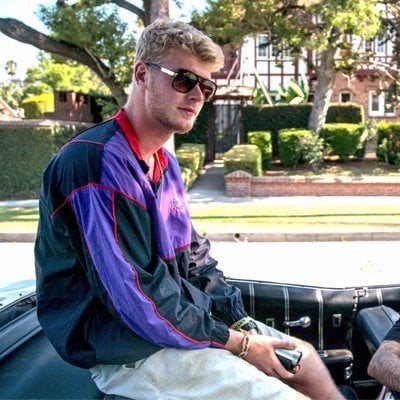 Original, jazzy, groovy — Yung Gravy’s latest single brings the sauce. The University of Wisconsin graduate found a voice in rapping and shows his talent with this hit.

On the Gravy Train Tour 2 right now, Yung Gravy came back to Madison in a thrilling concert with Caleon Fox and Roy Purdy. The hip-hop artist has a unique flow, with a satirical twist and he’s gathering fans from all over the country. The rapper’s greatest hit “Mr. Clean,” has amassed tens of millions of streams on Spotify, leaving fans anxiously waiting for his next drop. “Knockout” adds to Yung Gravy’s personality, showing what the artist’s talent is all about.

The brass opening is an ode to Yung Gravy’s knack for spicy instrumentals, while his flow delivers lyrics in a tasty fashion. It’s no surprise this song reminds me of soul music, as Yung Gravy tends to favor this style. It’s known he has an interest in the ‘50s and ‘60s, and his album and EP covers reflect the era’s popular pin-up art. His clothes also consist of bright colors, which make him stand out from most other rappers.

“Knockout” is essential to your workout playlist — the beat drops and you immediately feel the need to get up and move. Though the tune gets repeated throughout the entire song with no end, the rhythmic beat drops and funky vocals intervening their way through the verses gives flare to the song, which pushes you to groove.

His lyrical choices make me laugh, as he changes from rapping about playing your dad in crochet to spitting a line about cooking up a fillet. He doesn’t fail to keep his bold style of rapping about moms (or better known, “MILFs”), getting women and boasting about his swag.

Yung Gravy loves to talk about expensive watches with the lyric “new wrist, watch out.” He also sneaks in a line from his song, “Yung Gravity” with “Yung Gravity, I come and pull your bitch,” but the following line, “Your mama’s fantasy, I come and scratch that itch” leaves a bitter taste in my mouth because it’s quite odd. It sounds like he ran out of words to rhyme with “bitch.”

While his music might make him seem pompous and cocky, the artist has an approachable and friendly personality. I had the opportunity to meet him when he visited Madison and I genuinely enjoyed our conversations together.

Yung Gravy is saucy, spicy and funny — the components of decadent gravy. His next album drops soon and you bet I’ll be listening to it on repeat.