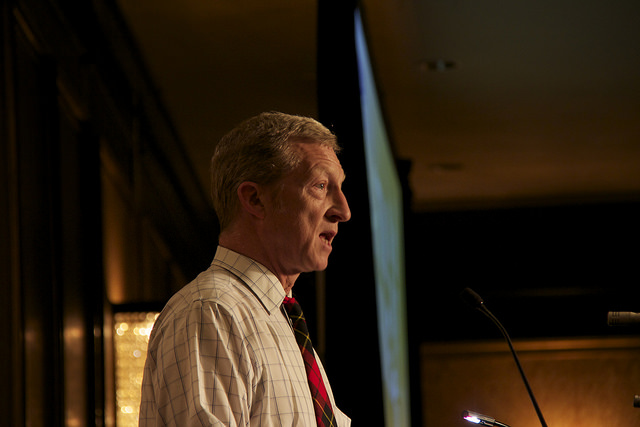 Since November, democratic billionaire backer, Tom Steyer has been airing numerous ads calling for the ouster of President  Donald Trump. In early January, Steyer doubled down on these ads, allocating an additional $30 million towards flipping the house and eventually impeaching Trump. While Steyer’s goals are lofty, they’re effectively useless if his first aim isn’t accomplished of taking control of at least the House in this year’s midterms.

As it stands, all 435 seats in the House are up for grabs come November, and with Trump’s approval continually tanking and the surge of progressiveness sweeping through the country in special elections, the odds seem decent for the blue blooded. Additionally, Senate seats such as Nevada and Arizona seem possible to pluck from the hands of the out-of-touch and flailing Republican party. But if Democrats truly want to win big and seize control of Congress that they lost in 2014, it’s funding campaigns that is the key to eventually dismantling Trumpism.

Focusing on impeachment before control is useless and unproductive. First, it’s unlikely, if not downright impossible to even get the idea off of the ground. Currently, Republicans have roughly 50 mores seats in the House — where grounds for impeachment arise — effectively eliminating any probability for the ball to even be passed to Congress.

Similarly, if somehow the House miraculously called for impeachment and the Senate somehow formally declared for an ouster — something never before accomplished in history — we would all be stuck with the dangerously bigoted, homophobic and harmful Mike Pence who’d still be armed with control of both branches of Congress.

And then what if we somehow end up with another impeachment and toss out Pence? Then comes Paul Ryan — it’s an endless, depressing stream. So, no, an immediate call for impeachment is a drastic waste of resources. But what is productive, needed and what should be the focus of all democrats in the next coming months, is allocating resources to congressional races that matter.

One such race that has received national interest and one that is vital for the health of our own state and the nation of a whole is the race in Wisconsin’s First District, in which union worker, veteran and cancer survivor Randy Bryce is challenging a seat that has been held for far too long by the useless — and broke of intellect and backbone — hack that is the Ryan.

It’s not hard to rally around Bryce, who is running on a progressive platform that not only includes a call for a $15 minimum wage and a vast increase for women’s reproductive rights, but the 53-year-old Bryce is also running for single payer health insurance, a direct jab at Ryan’s failures at trying Similarly, it’s not hard to rally around generally despising Ryan, who has completely lost touch with his constituents, proven by the fact that he hasn’t hosted a town hall since fall 2015.

Whether that be from his remarks that his college dream was to end Medicaid, to his belief that poverty is caused by one being a failure or to his phony incessant claims to support ideology over party, Ryan has been polluting Wisconsin and the country for far too many years. Where people like Steyer come back into this is the vast disparity in campaign funds raised by Bryce versus Ryan.

According to Opensecrets, a watch dog group monitoring campaign finance, Ryan’s reelection efforts have on hand around $10 million, some 10 times more than Bryce. While this difference may not seem like a lot, a look at Ryan’s donations in the past paints a much more striking picture.

One such culprit fueling Ryan’s war chest is the leviathan of greed that are the Koch Brothers, who over the years have giddily pumped in hundreds of millions of dollars to politicians like Ryan in efforts to further their own crusade.

While Bryce’s campaign has received noticeable national attention and has received grassroots style support of individual donations over the months, it’s simply not enough to battle against the plutocratic parasites controlling Republican agendas.

Continual national funding of individual campaigns such as these that will spark the kindling of change eventually leading to the recapture of Congress. Steyer has a commendable goal: To remove the racist and white nationalist president from office. But where one bigoted politician falls, people like Pence or Ryan would be glad to take their place.

The goal should and always be individual campaigns. Take these millions that would be spent on ad campaigns and send them to the trenches, to the campaigns that have the power to completely shift the paradigm of the Republican dominated congress. Instead of cutting off the head we need to burn its neck in the midterms — it’s the only way to stop the Republican Hydra.

Adam Ramer ([email protected]) is a junior majoring in history and politics.