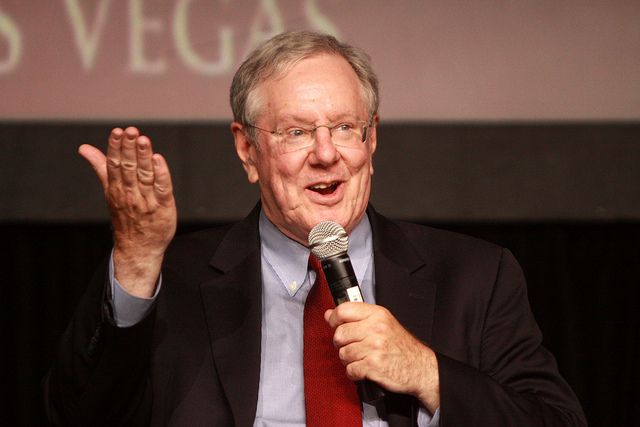 Economist Steve Forbes, author of “How Capitalism Will Save Us,” gears up to speak to students here at the University of Wisconsin tonight amid cries of protest from student organizations such as the Student Coalition for Progress, Madison Feminist Directory and Socialist Students Madison, who claim “capitalism is violent.” These groups, alongside many others, are calling on the UW student body to resist Steve Forbes’ veneration for and promotion of capitalism.

The Facebook event description reads: “Capitalism is inherently a violent ideology that preys on the weakest in our communities. It does not leave room for people of color, people with low income, disabled people, and many others to succeed. Instead of “saving us,” this ideology will only make us weaker.”

Forbes is unarguably a man who has benefitted very much from capitalism. Son of longtime publisher of Forbes Magazine Malcolm Forbes, Forbes enjoyed a privileged childhood, an education at Princeton University, indoctrination into the family magazine and multiple political appointments by the likes of President Ronald Reagan.

Not surprisingly, Forbes is a conservative. Having endorsed multiple Republican candidates such as U.S. Sen. Marco Rubio, R-Florida, and as a Republican primary candidate for the presidency both in 1996 and 2000, Forbes obviously conforms nicely to the more moderate right-wing ideology.

But someone’s political views, whether favorable to capitalism or not, are not grounds to protest their right to speak to a campus of 40,000 students, many of whom are interested in Forbes as a businessman, as well as his political views.

In fact, Forbes is speaking on behalf of his new book, “How Capitalism Will Save Us,” which, while touching on topics such as the Affordable Care Act and taxation, has little to do with some of the more incendiary political debates President Donald Trump has engendered in his first 100 days in office.

This is not at all similar to the Young Americans for Freedom’s selection of Ben Shapiro to be their big-ticket speaker first semester, delivering a speech targeted directly at ridiculing leftist ideology. Shapiro is known for his controversial stances on freedom of speech, the BDS movement and Israel and for his overall lack of political correctness regarding issues of race, ethnicity and privilege, and rightfully caused students at UW to question the ideology of YAF itself.

The protests against Shapiro, therefore, were warranted. His ideas far surpass the traditional low taxes, small government, socially conservative ideas held by Republicans such as Forbes. His speeches and his ideology target groups of people he deems to be weak or inferior and explicitly ridicule them. If he wants to dish it out, by all means, give it right back in the form of protests.

Forbes, on the other hand, is a reputable economist who is coming to the university to speak on behalf of his new book. He is not coming to address the BDS movement that garnered so much support and an equal amount of backlash, he is not coming to denounce liberals for being allies for marginalized groups, as Shapiro did at a talk at the University of Missouri.

This is a public university, one that has a large student body that holds different beliefs. It is unfair to expect every speaker or guest of UW to align with the personal beliefs of each student. We live in a capitalistic society, whether for good or bad, and there are plenty of people here, and around the U.S., who truly believe this system is what makes this country great.

Capitalism enables inequality and makes many people’s lives difficult, but that doesn’t make Forbes an evil man for discussing its values, nor for having political beliefs that don’t align with a more liberal world view.

A large part of freedom of speech is opening forums for public discussion and debate. Speakers such as Forbes open doors to have more conservative-oriented discussions on a campus that leans fairly far to the left.

I’m not arguing that you have to agree with Forbes, or magically agree with the entirety of what conservatives believe, just that maybe some exposure to these ideas, sans protest, will enable students to better discuss political and social issues.