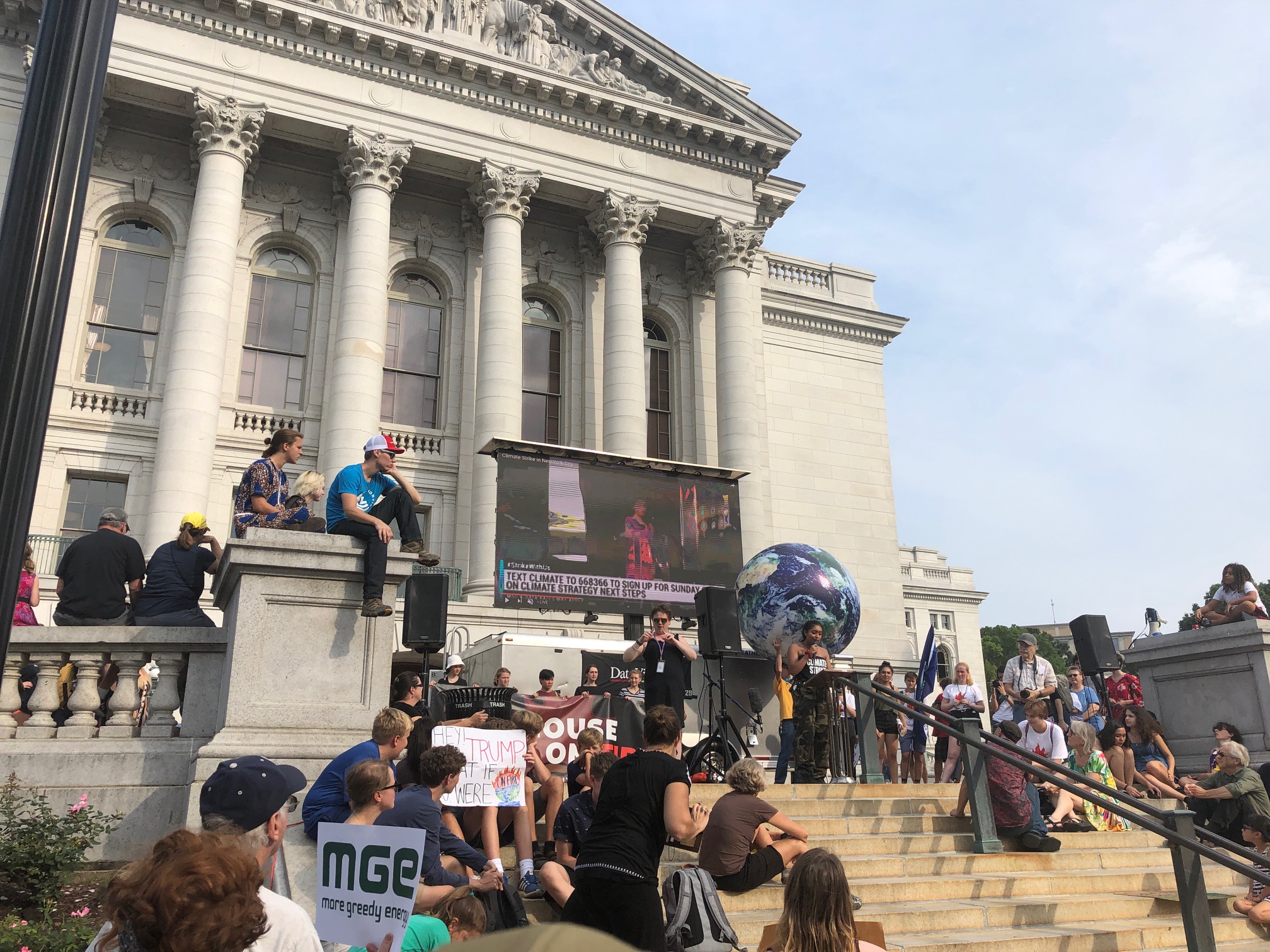 Hundreds of people gathered outside the Madison Gas and Electric facility to urge MGE to transition completely to 100% renewable energy by 2030 Friday afternoon.

This rally was part of the all-day climate strike organized by the Youth Climate Action Team. Strikes like this occurred in 150 countries across the globe in an effort to end the use of fossil fuels, according to the Global Climate Strike website.

The rally began with a speech from Stoughton City Council member Ben Heili who said that Stoughton has public power, meaning the city owns the electric and water utilities, unlike Madison, where these utilities are owned by MGE.

Heili said this model allows for community oversight because utility decisions are made at public meetings. He also said he is currently pushing Stoughton to adopt “aggressive energy goals” — something he said would be easier to do under this public model than under Madison’s model.

“What public power does is it gives the people who live here control and oversight over how their power is provided and it helps keep resources local,” Heili said. “It won’t be easy, but Madison could start this process today.”

The speakers following Heili supported this idea of empowering local communities. Dayna Long, a member of People’s Green New Deal Madison, spoke on the importance of listening to those most impacted by climate change.

Long said in order to make fair solutions we must recognize that people of color are disproportionately impacted by environmental degradation.

Fighting for equitable sustainability was touched on throughout the march and rally. Brook Bowser, a UW-Madison junior and member of CLEAN — a student organization working to get UW to commit to 100% clean energy throughout campus by 2030 — said everyone needs to benefit from environmental conservation.

“I think clean air, clean land and clean water are human rights and I think that we need to stand up until that’s true for everyone,” Browser said.

The protesters then marched to the Capitol. Once there, several youth organizers spoke including UW freshman Crystal Zhao who talked about growing up in China where waking up to black factory smoke was a normal occurrence for her.

Zhao said her story is unfortunately not a unique one — that climate change anywhere affects the earth as a whole and that it is unacceptable.

“I’m here today because my eight-year-old sister learned how to put on a face mask before she learned how to ride a bike,” Zhao said. “Being able to breathe and run around in the park should not be a privilege — not for her, not for anyone.”

Marchers then gathered around a large screen awaiting the live stream of 16-year-old Swedish climate activist Greta Thunberg. Thunberg, who was streamed from New York, began the Friday climate strikes a little over a year ago.

There was trouble loading the live stream connection and so the executive directors of the Youth Climate Action Team, Sophie Guthier and Max Prestigiacomo, spoke. Guthier, a UW freshman, said it is more important to focus on making structural change than individual change.

Prestigiacomo, also a UW freshman, said we can no longer put off addressing climate change and ended the rally by urging youth to vote and run for office.

“By characterizing the climate crisis as something that we still have time to solve we provide a false sense of optimism,” Prestigiacomo said. “This fatal lapse in reality will continue to perpetuate our sleepwalk into mass extinction unless we act.”

Marchers then rallied in the Capitol rotunda in an effort to get Gov. Tony Evers to commit to 100% renewable energy.