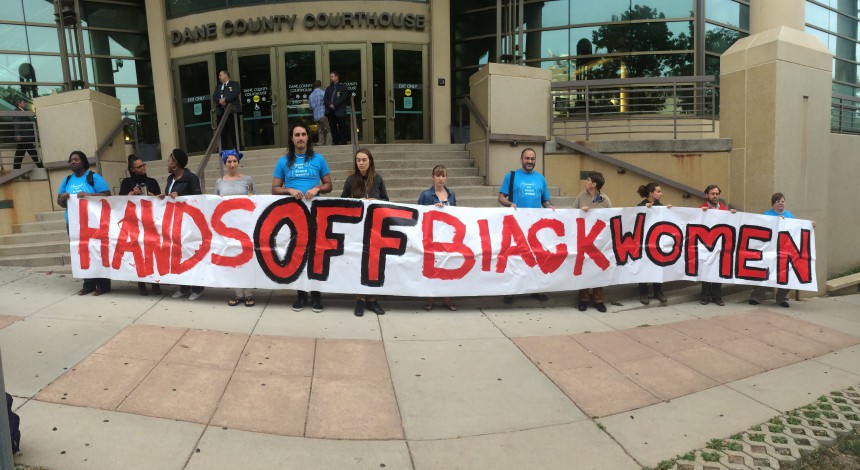 Members of the Young, Gifted and Black Coalition gathered on the stairs of the Dane County Courthouse Thursday morning, demanding all charges against the suspect in fatal stabbing case, Cierra Finkley, be dropped.

Finkley was arrested after fatally stabbing her ex-boyfriend, Terrence Woods, on Aug. 18. The stabbing occurred near Finkley’s apartment building, after Woods kicked down her door and initiated the altercation.

Demonstrators chanted phrases like, “hands off black women,” and “community control of the police.” Alix Shabazz, YGB member, led the chants, speaking over a megaphone.

Dane County District Attorney Ismael Ozanne spoke at Finkley’s court hearing and announced he needed additional time to thoroughly investigate new information that was recently brought to light. Ozanne said he would be in contact with Finkley’s attorney, should he decide to take further action. Finkley was released with no bail conditions.

While this does not promise that no charges will be brought forward at a later date, Shabazz said this is a step in the right direction.

“We are counting this as a victory,” Shabazz said. “We feel encouraged by the fact that the DA is taking his time making sure that he is crossing his t’s and dotting his i’s.”

Shabazz believes Finkley’s release is directly tied to the community action and media coverage that has occurred over this particular case.

Shabazz is hopeful there will be no further charges brought against Finkley in the future.

“I am very hopeful,” Shabazz said. “As a freedom fighter, I have to be hopeful.”