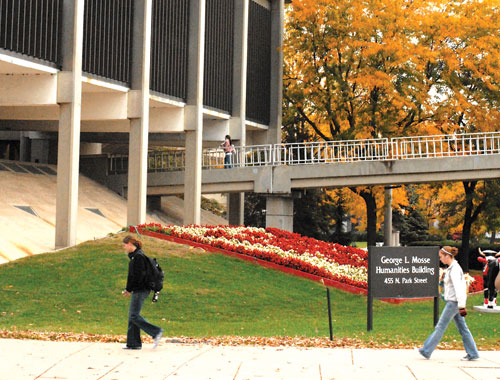 The pedestrian bridge between Humanities and Vilas Hall over University Avenue is scheduled for demolition on Aug. 10 due to its crumbling structure.

Since it was built in 1971, the bridge has been a crossing point between Vilas and the Humanities building for 44 years.

@UWMadison getting rid of the Vilas pedestrian bridge? I believe deterioration is a cause but "a decline in use"? No way is that true.

“There is not a lot of money for maintenance work on campus, and with the money we have we want to spend it on other projects instead of replacing a bridge,” he said.

With the new pedestrian crosswalk light on University Ave, fewer students use the bridge, making the cost of fixing the bridge not worth the extra money, according to a University of Wisconsin statement.

Due to construction, multiple lane closures are expected during demolition with parts of University Avenue and Frances street being completely closed Wednesday at 8 p.m. till 6 a.m. Thursday.

So I crossed it one last time. Pedestrian bridge over University Ave connecting Vilas HallWPR with the… http://t.co/vEn8RGAc44

The main part of the bridge will be removed Wednesday, and the places where the bridge had been connected to Vilas and Humanities buildings will be replaced by handrails, Brown said.

Construction is set to be completed by Monday, August 17.