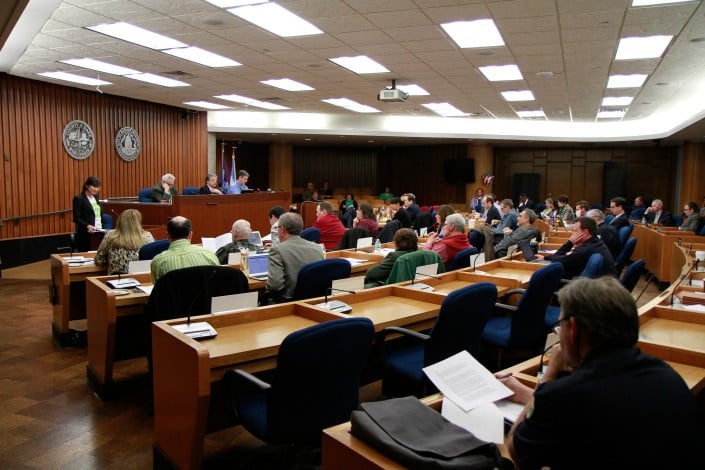 City Council rushed quickly through their Tuesday agenda to hear testimony from more than 20 community members on the officer-involved shooting of Tony Robinson.

Twenty-three community members spoke on the Robinson’s death and the various structural changes they believe are necessary to create a safer community.

Several community members voiced outrage and asked for the city to end the violence and racial discrimination against African Americans. Several said they felt unsafe in their communities, and felt as if law enforcement officials were constantly monitoring their actions.

Reverend Joseph Barrington said Robinson’s death must be used as a teaching moment.

“It’s important to understand that the same things that happened in Ferguson and every other city in this country that we [are] like that … we are all like other cities with disparities and when people are pushed to the wall, they will react,” Barrington said.

The council was unable to directly address the issues community members spoke about, but Mayor Paul Soglin said this didn’t mean they weren’t concerned. City policy states the Common Council may not discuss items that aren’t on the agenda without public knowledge beforehand.

Ald. Lisa Subeck, District 1, suggested scheduling a committee meeting in which together the group would discuss whether there is a possible item for the council to discuss.

Soglin ended the meeting the same way as it began, with a moment of silence for Robinson.

Prior to hearing the community members speak, City Council also approved a resolution calling for the end of state and federal rules banning government-funded abortions.

The council approved the resolution unanimously as a local initiative to call for an end to a federal law banning the use of federal funds for most abortions, with the exception of incest and rape.

“On numerous occasions I encountered numerous women in the shelter system who were seeking abortion who cannot afford them,” she said.

Though the council itself cannot make any changes regarding the federal law, Subeck said it was important that the city use its voice to speak against it.

Dana Long, president of the Wisconsin Chapter of the National Organization for Women, said funding for the comprehensive reproductive health care is necessary to ensure that all women have the right to safe abortions.

“I am extremely proud that Madison is taking a step forward on asking to limitations on public insurance to be lifted,” Long said.

Correction: This article previously stated the council approved a local initiative to call for an end to a federal law banning the use of federal funds for most abortions, with the exception of incest and rape in a 5-2 vote. The resolution was passed unanimously. We regret the error.