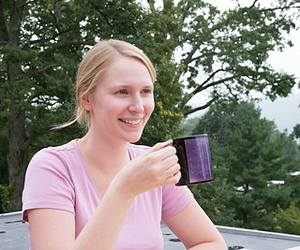 Annika Konrad, a University of Wisconsin graduate student in English, realized at a support group meeting that those who are visually impaired struggle with communication.

Konrad, who’s visually impaired herself, realized that after a meeting at the Wisconsin Council of the Blind and Visually Impaired and has since helped try easing those communications.

“I realized that many of the frustrations and obstacles people were sharing revolved around communication,” Konrad said. “[Their issues included] figuring out how to instruct strangers on the bus about not distracting your guide dog, dealing with the stressful burden of always having to ask friends and colleagues for rides or simply explaining to friends and colleagues what it means to be visually impaired but not blind.”

Konrad used her experience to help establish a writing group for those who are blind and visually impaired. In 2013, with the help of her support group, she began recruiting people across Wisconsin who wanted to write about their experiences of living with blindness or low vision, she said.

Together, they created a blog called The Outlook From Here to publish their stories, intending the stories to help others understand the everyday experiences of living with blindness and visual impairments, Konrad said.

“Many of the writers have taken the opportunity to instruct, guide, enlighten and inform readers about what life is really like for people who are blind and visually impaired,” Konrad said.

Now, Konrad is contributing to research at the McPherson Eye Research Institute. The institute was founded in 2005 to help gather knowledge and critical research about vision and apply that knowledge to the prevention of blindness, according to Emily Kumlien, a UW Health spokesperson.

As a trainee for institute researchers, Konrad aims to learn more about the communication challenges blind and visually impaired people face by conducting life history interviews.

In these interviews, people who are blind and visually impaired discuss how they have been able to communicate with their disability whether in school, work, family life, social life, health care and more, Konrad said.

“Communication goals like asking for help, instructing others on how to give help and inviting people to talk to you are all challenging and require constant effort,” Konrad said.

Konrad said she hopes this research will contribute to changing the national discourse and make it easier to talk about these disabilities.

Next month, the McPherson Eye Research Institute will mark its fourth annual Cycle for Sight fundraiser. The event will be held Saturday, March 14 in Madison at the Natatorium, the Southeast Recreational Facility and the Princeton Club’s west side location, Kumlien said.

Cycle for Sight began in 2011 when the institute wanted to raise awareness of its research to help not only the 100,000 people in Wisconsin affected by blinding diseases, but millions of Americans across the nation, Kumlien said. She encouraged students and community members to participate in the annual event.

“This is a chance to raise awareness and understand the incredible research that is happening right in our backyard by some of the best vision researchers right in Wisconsin,” Kumlien said.

Correction: This article previously misstated the date of the Cycle for Sight fundraiser as March 13, the correct date is March 14. The Badger Herald regrets this error.