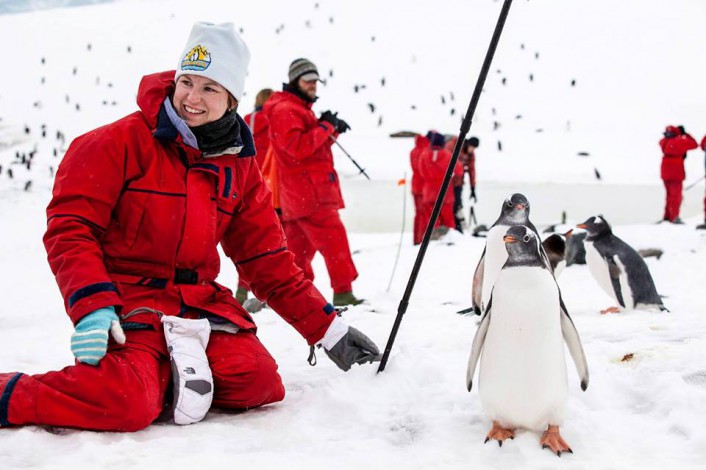 After finishing a marathon raising money for animal rescue in Antarctica, a Madison runner has now completed marathons on five different continents in pursuit of her long-term goal to run a race on every continent.

Kelly Parrish, a Madison resident and technical writer at Epic, recently traveled to Antarctica to run a marathon, which raised money for Heartland Farm Sanctuary.

Heartland is Wisconsin’s only sanctuary dedicated to farm animal rescue and a resource of animal-assisted therapy programs for children with special needs, at-risk youth and vulnerable populations, a statement from Heartland said.

Parrish has volunteered with Heartland and said she chose to donate the money she raised to them because of the work they do not only with animals but with special needs children as well.

“They rescue neglected and abused animals without homes and then they also have therapy animals for kids. They have a lot of programs, like summer camps for kids, and take animals to nursing homes and things like that,” Parrish said. “They are a great operation, and I thought they really deserved the fundraiser.”

Parrish said the marathon in Antarctica consisted of two different groups of 100 runners each.

Parrish faced many challenges upon arrival in Antarctica, mainly regarding the muddy terrain and bleak weather. Even though Parrish had trained on snow and ice in Madison, she said the mud was a surprise.

Parrish said she was not sure what weather to be prepared for so she packed for a range of zero to 40 degrees and was met with muddy, sleety and windy weather, which was not ideal for marathon running.

On top of the weather, Parrish said it was more hilly than she had imagined, with a number of short steep hills. Because of all these factors, she said the runners’ times were all about an hour slower than they normally would be under ideal conditions.

“It ended up being quite muddy, as well as sleety and rainy and really windy, obviously not ideal conditions for a marathon,” Parrish said. “It took me four hours and 54 minutes [to complete the race] and my normal time is about three hours and 51 minutes, so it was about an hour slower like they said it would be.”

Traveling was an additional challenge for Parrish. Getting to Antarctica required flying to South America and then taking a boat for two-and-a-half days to the final destination, she said. Because of the long travel time, she said she did not have a chance to acclimate to the location or continue to physically prepare during the days leading up to the race.

Despite the conditions, Parrish was able to take second place in her race group.

Parrish said she is unsure whether she will run again in support of a fundraiser, but wants to continue running marathons and half-marathons.

“I’d like to keep doing marathons and traveling,” Parrish said.

Only Africa and South America remain for Parrish.