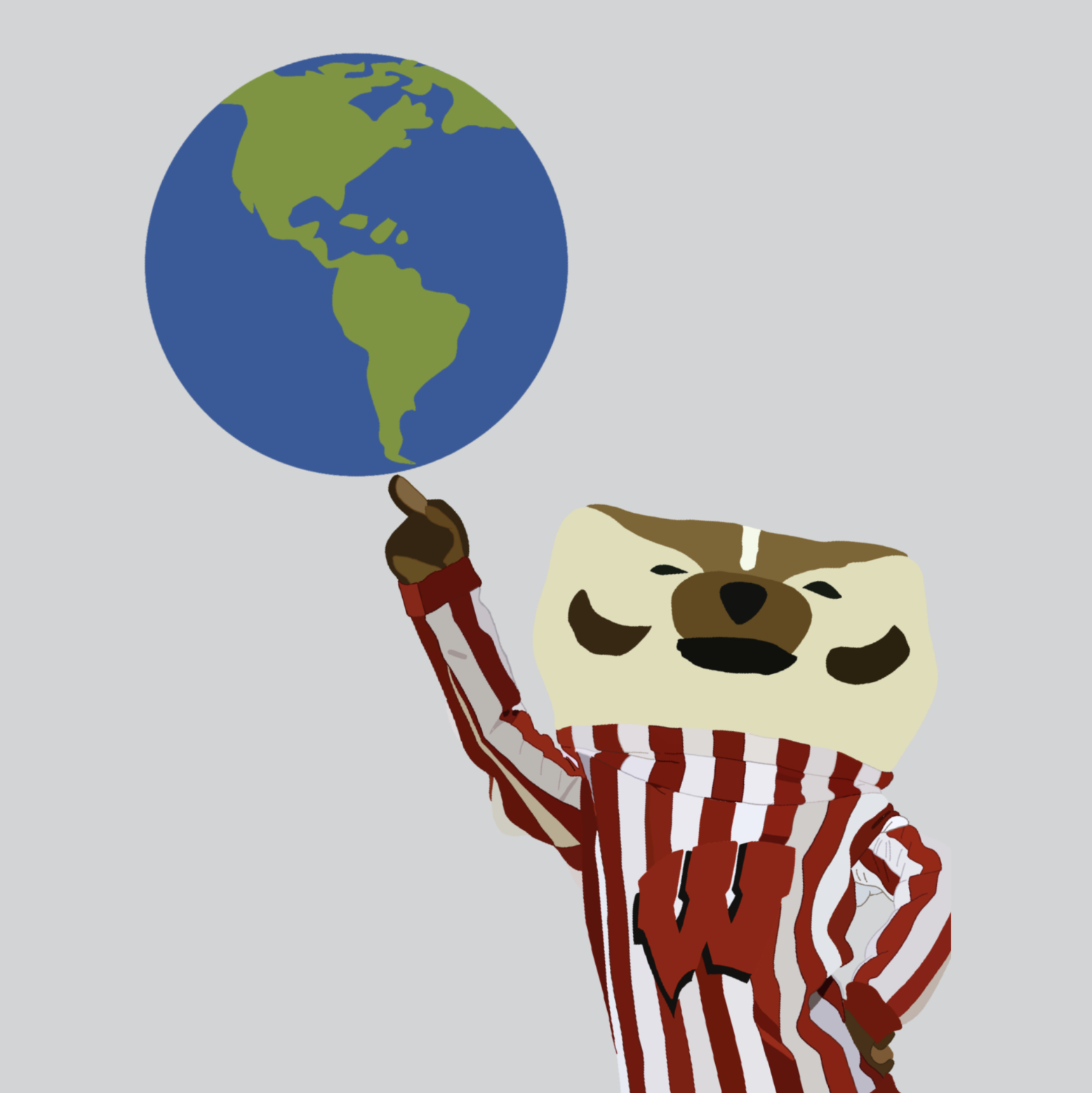 On any United States university campus, the person paying the highest tuition fees is an international student. For BIPOC international students — who are often subjected to racism and xenophobia in a foreign country thousands of miles away from home — the cost is even higher.

University of Wisconsin junior and psychology major Brian Li is an international student from China. Li said he chose UW for its psychology department, which ranks in the top 20 in the country, according to U.S. News.

During the fall 2020 and spring 2021 semesters, international students paid $19,814.90 in tuition fees, which is the highest amount of tuition any student pays on the UW campus — almost four times the tuition for Wisconsin residents and $500.04 higher than the nonresident rate.

International students fall under the category of nonimmigrant visas — mainly F-1 and M-1 — and are officially considered “Nonresident Aliens” by the U.S. government and the Internal Revenue Services. According to Li, in order to improve the college experience for international students, the first action the UW administration needs to take is reducing tuition fees.

“Students are facing financial problems, especially during the pandemic,” Li said. “Many international students had [in-person] jobs and now they lost them.”

UW sophomore Lennox Owino is an international student from Nairobi, Kenya. He said one of the major reasons he decided to attend UW is tuition — Owino was accepted into the King-Morgridge Scholars program, which is a full-time, four-year scholarship program for international students.

Owino said UW should do more to facilitate connections with other students and resources on campus for international students, since many are coming to a country they have never even visited before. According to him, UW needs to provide international students with support other than ensuring they are maintaining their visa status by making sure they are getting the same opportunities as domestic students for their overall success.

“They do make the bare minimum effort in terms of making sure internationals have a place on campus … and know about the F-1 visa status and how to make sure it’s up to date,” Owino said. “Looking at the services that they provide to every other student, I think they should put in more effort.”

Owino expected to see other people with whom he shares the same identity, but he said UW’s lack of diversity has made this difficult.

The 27th session of the Associated Students of Madison has made a significant effort to promote rights for minority students, including for international students, Li said.

ASM Chair Matthew Mitnick has advocated for various issues concerning international students and made sure their concerns have a spot on the ASM agenda.

“I’ve tried to look at things from their perspective … I am not an international student, but this is a population of students that is continually screwed over by the administration and are often forgotten about when it comes to very important issues,” Mitnick said.

Mitnick said with the pandemic, he’s focused on addressing equity issues within virtual learning. This fall, Owino introduced legislation about academic policies for telecommuting international students so they don’t have to get up at 2 a.m. for a class or a final.

“For internationals, most of the needs that we do have, haven’t been met or at least most of the times we are the ones who have to make the extra effort to let administrators know, ‘Hey, you guys need to take care of us in this particular project,’” Owino said.

International students usually have their student orientation and advising scheduled for a week before classes start, mainly because their visa restrictions don’t allow them to arrive in the U.S. a month before classes start. By the time they’ve arrived in late August, most of the classes have already filled up with domestic students who started doing SOAR in June.

Moreover, UW Housing charges students per day to stay in their room before their scheduled move-in, which is the weekend before classes start, strapping international students with additional housing fees.

“We are having a situation whereby we have to wait till we get to campus, which is quite late and by that time we had almost all the domestic classes filled and very few classes for internationals to pick from, so that was what I was working on,” Owino said. “But it was quite challenging trying to convince administrators to change the whole system or at least put in accommodations for international students.”

In 2020, UW refused to compensate telecommuting international student employees due to risks involved in students working from a different country, such as each countries’ different requirements and standards for employers in employment law, international payroll tax obligations, cybersecurity and data privacy safeguards. UW had, however, jumped over those risks and was compensating graduate students working as teaching assistants from outside the U.S., Owino said.

Because this required significant lobbying, Owino, who is the Nominations Board Chair for ASM, said his perception of the administration has remained negative. He was surprised to see the amount of effort ASM had to put in to ensure UW compensated telecommuting international students.

“I didn’t understand as to why there were great efforts to block students from getting the required wages that they do need to survive on campus, given the fact that internationals do pay a lot of cash to study at UW,” Owino said.

Owino said student leaders generally have to go out of their way to schedule meetings with UW administrators.

“It’s not supposed to be difficult to advocate for your fellow students, but I do feel administrators make it difficult for that to happen,” Owino said.

ASM leaders have been advocating for UW to accept the COVID-19 Student Relief Fund, which would provide financial assistance to students regardless of their citizenship.

“The COVID-19 Student Relief Fund was designed under the pretense that the university is interpreting federal guidelines very conservatively so that they’re not giving international students, DACA recipients and undocumented students aid when they are eligible for it and they can receive that aid,” Mitnick said. “That’s why we designed the COVID Relief Fund which prioritizes those students.”

According to the Federal Register of the U.S. government, institutions must use at least 50% of their HEERF allocation to provide “emergency financial aid grants” to students for expenses related to the “disruption of campus operations” due to COVID-19. Also, institutions can use over 50%. UW has currently allocated about one-third of their total HEERF II to students.

In an email statement to The Badger Herald, Communications Manager at the Office of Student Financial Aid Karla Weber said the combined institutional and student aid allocation is a total of about $29 million. Out of this, UW has released $9.89 million as emergency aid for students, leaving nearly $20 million unaccounted for.

Weber said though international or undocumented/DACA students may not be eligible to receive direct support from the federal Higher Education Emergency Relief Fund II, UW is using private funds to provide emergency aid to them.

“[UW] won’t actually advocate for students and I think they see international students as a source of revenue given that they pay the highest tuition out of everybody, which is really sickening,” Mitnick said.

Weber said because international students are not eligible to submit the Free Application for Federal Student Aid, OSFA is unable to help them “all that much.” They can, however, use OSFA’s Success Services like basic needs support and can benefit from Success Services, like basic needs support and help gaining access to food, housing and other ways to promote overall wellness while attending UW.

Li, who is telecommuting from China, said he has heard from several people they don’t consider telecommuting a good experience, especially because those in Madison can still walk past Bascom Hill and have Babcock ice cream, but for telecommuting students, the only connection they have to Madison is online classes.

“Madison has transformed from a university to now maybe a subscription to videos,” Li said. “I can’t say for students who stayed in Madison. For me, I feel further apart.”

Since the start of the COVID-19 pandemic, international students have faced countless obstacles. For Li, it was seeing “Chinese Virus” all across State Street.

“The virus is a physical and scientific thing, but now it’s arbitrarily dedicated to part of the student body only because of their race,” Li said. “It’s not fair and it’s discrimination.”

The United States Immigration and Customs Enforcement released guidelines in July, which barred nonimmigrant F-1 and M-1 students from taking fully online classes while in the U.S. Wisconsin joined the lawsuit against the ICE guidelines and Chancellor Rebecca Blank came out in support of international students. The guidelines were later revoked.

For UW sophomore Ken Wang, several of his friends couldn’t return to the U.S. as embassies shut down due to the pandemic.

“They threatened our visas and status. That’s extremely unfair,” Wang said. “Why do international students have to risk their safety in a foreign land to go to school?”

In an email to The Badger Herald, International Student Services Director Samantha McCabe said 2020 presented a myriad of challenges and threats to international student mobility.

“Between COVID-19 and its related travel restrictions, the fight against racial injustices and the almost weekly presidential proclamations and federal regulatory proposals related to immigration, it was a dizzying and exhausting year. And it isn’t over yet,” McCabe said.

McCabe did not respond to any questions regarding any ISS efforts to advocate for telecommuting international students who were not being compensated for their work.

“Speaking from the perspective of internationals, I do feel at times it’s quite hard for U.S. citizens or at least domestic students to approach international [students] because perhaps they feel like they’ll say something they’re not supposed to say or perhaps make a mistake in how they interact with us, but most of the times it’s us international students who have to put in the effort to approach different students to try and be friends with them, to try and get to exchange our cultures,” Owino said.

At UW, Owino said he has experienced microaggressions — or small, biased remarks which often seem innocent but can compound and make BIPOC students feel isolated. For example, Owino said students may ask him if Kenya is the capital of South Africa, or if he speaks “African.” What helps Owino deal with these microaggressions is knowing sometimes they don’t come from a negative place, but rather just a student being unaware or misinformed.

Though last year was tumultuous for every student, international students faced additional struggles with xenophobia, challenges to their visa status, managing online classes at odd hours of the day and getting compensated for their work. Some international students did so from the comfort of their home countries — dissociated from the campus community — while others stayed in Madison, oceans away from their families in the middle of a pandemic.

“We do tend to bring a lot of diversity to the Madison area and it’s just up to Madison to make good use of this diversity,” Owino said. “As a Kenyan student, my presence on campus means that at least you’re going to get the chance to understand what it means to be an international student. Make good use of the diversity on campus, try to learn about the different cultures so that at least you get informed about how different people around the world get to spend a normal day and perhaps those different perspectives together can help shape not just UW-Madison, but the Madison city area as well.”