Looking down at the small piece of paper that barely fit between his thumb and index finger, two phrases glared back at University of Wisconsin senior Dane Skaar: “Fight Anti-White Racism on Campus” and “#UWAltRight.”

A male student with dark hair and glasses had approached Skaar as he walked out of his environmental studies lecture. The unidentified student then asked Skaar if he would like to learn about a new club he was starting on campus.

Initially, when the student told Skaar he was piloting a club fighting anti-white racism, Skaar thought he didn’t hear him correctly.

“I was in disbelief,” Skaar said.

The alternative right, commonly referred to as the alt-right, is a movement based on right-wing ideology and white identity that aims to reject political correctness. After the election of President Donald Trump, the group gained notoriety as one of its members, Richard Spencer, performed a Nazi salute and yelled “Hail Trump!” during an alt-right conference.

Since then, organizations such as the Anti-Defamation League have denounced the alt-right as a hate group, citing its association with the resurgence of white nationalism and neo-Nazism. 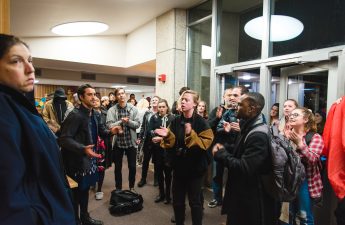 Student-led petition calls for Young Americans for Freedom to be denounced as hate groupNearly a month after conservative pundit Ben Shapiro came to speak at the University of Wisconsin campus, students are calling Read…

When Skaar saw the phrase #UWAltRight on the slip of paper, one word came to his mind: divisive.

“When it starts having conversations about racism, usually most of those efforts are to educate people and bring people together, whereas this type of approach is divisive,” Skaar said. “The intention seemed to be more bad, it seemed to change the climate to one of white nationalism.”

In a Facebook post that has gained hundreds of shares, Skaar wrote the “claim of ‘anti-white racism’ is a dangerous attempt to victimize those who are born with systemic white privilege…”

For Daniel Dropik, a UW student and the founder of the Madison American Freedom Party, anti-white racism exists at UW and the university’s administration exhibits anti-white practices, policies and climate.

His club — the one featured on the slip of paper given to Skaar — is described as a “political and racial advocacy student club promoting Western European American students and traditional values.”

In a recruitment video for his organization, Dropik said not only does anti-white racism exist, but it’s on campus significantly as it produces measurable effects on the quality of education for students of Western European descent.

As easy as it is to demonize white students who engage in racial outbursts, Dropik said in the video, it’s usually the case there is a legitimate racial grievance behind it which otherwise can be changed into political dialogue and intellectual exploration.

“Explicit white racial and political advocacy will significantly reduce the amount of hates crimes perpetrated by whites against nonwhites,” Dropik said in the video.

In an email to The Badger Herald, UW spokesperson Meredith McGlone said the administration is aware there is one individual taking part in this activity and Madison AFP is not a registered student organization.

“Judging by the response this is getting on social media, students appear to be rejecting this mindset pretty soundly,” McGlone said. “Our campus values are clear: we believe diversity is a source of strength. If you want to talk about a movement, talk about the scores of students, faculty and staff whose hard work and dedication are making this campus a more welcoming and inclusive place.”

The Badger Herald could not reach Daniel Dropik for additional comment.