On an international stage in Rotterdam, Netherlands, rowers from around the world gathered to compete in the 2016  World Under 23 Rowing Championships.

Representing Team USA, University of Wisconsin senior Maddie Wanamaker and her teammates steered themselves to 11th place in the championships.

Though the competitors all came from diverse backgrounds and the women in the boat next to her spoke Greek, Wanamaker said she felt a connection to the international league of rowers.

“I didn’t [initially] know what the rowing world was like,” Wanamaker said. “Just seeing everyone from different countries and being out on the water where everyone is speaking different languages … was unifying because everyone is doing the same thing.”

Training at the elite level

After three months of rigorous training and intense competition for seats, Wanamaker made her international debut at the championships. She was one of 32 female rowers invited to the 2016 U.S. Rowing Women’s Under 23 Selection Camp in New Jersey where rowers trained and battled for a seat on the championship team.

Rowers race using two different types of techniques known as sweeping and sculling. In races like the eight boat, rowers use the sweeping technique. When sweeping, each rower has one oar. When competing in sculling events like the quadruple scull, each rower has two oars.

College athletes are only allowed to train 20 hours per week but Wanamaker, joined by fellow Badger Lexi Siverling, trained for several hours longer at the camp with little downtime in between. Though Wanamaker qualified for the quadruple sculls boat at the camp, Siverling was just short of making the eight boat and became an alternate.

Wanamaker spent the first half of the camp competing for a spot on the U.S. team. After successfully earning her seat on the quadruple scull, she trained for the next several months for the championships.

“Just knowing that I was going to the Netherlands to compete for my country helped [me] stay motivated,” Wanamaker said.

Maddie Wanamaker, constantly improving her techniques, sculls over Lake Mendota during morning practice Monday, Sept. 12, 2016. This is her first day back in training after taking a week off after rowing in the World Rowing Championships late August.
Jason Chan/The Badger Herald

Badgers in the Olympics

Wanamaker joins a long line of competitive female rowers from UW, several of whom have continued on to become world champion athletes and even Olympians.

This summer, two former UW women rowers were among the world’s greatest as they competed on the sandy beaches of Rio de Janeiro, Brazil for the 2016 Olympic Games.

Grace Latz and Vicky Opitz were new to the sport when they first walked onto the Wisconsin women’s rowing team in 2006. But after 10 years of dedication to the sport, the two world champion rowers qualified for the 2016 Olympic team.

During practice, with her eagle eye, Coach Bryans spots every improvement her athletes can make and reminds them over her megaphone across the water.
Jason Chan/The Badger Herald 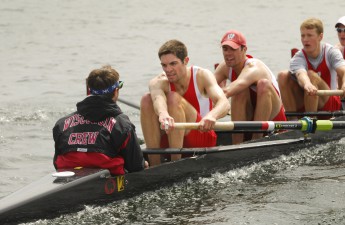 Q&A: Ross James talks second trip to Olympics, what it’s like rowing with his twinAfter falling .3 seconds short of a bronze medal in the 2012 Olympics in London as part of the United Read… 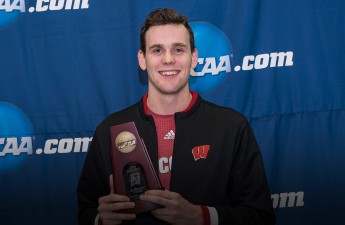 UW student athlete swims toward Rio OlympicsWhen you see Matthew Hutchins, a junior majoring in history at University of Wisconsin, walk out of the Wisconsin Historical Read…

Badger women’s rowing coach Bebe Bryans said watching two of her former athletes compete on the global stage in Rio de Janeiro instilled a great sense of pride in her.

“[Latz and Opitz] were really good college athletes, but to make it to the next level they had to make a huge commitment to put everything in their lives [into the sport],” Bryans said.

Wanamaker had the opportunity to meet with Latz and talk about her time rowing at Wisconsin, where Wanamaker said they shared many of the same rowing experiences.

While Latz inspired her, Wanamaker said she is unsure if training and qualifying for the next Olympics is something that she wants to accomplish. After witnessing the amount of work and dedication Olympic rowers put into the sport, she admitted it would be a challenging journey.

“Doing three months of [rowing] was very challenging and doing four years of it seems kind of tedious to me,” Wanamaker said. “I’m not saying I wouldn’t do it, it would just be a lot of work.”

For now, Wanamaker looks toward her final season with her fellow Badgers and getting back to training on Lake Mendota. Last spring the women’s rowing team qualified for the NCAA tournament and finished ninth overall. Wanamaker said she hopes the team is able to repeat the experience.

Bryans also looks forward to the season. She said the women’s team has turned a corner in terms of the team’s overall expectations of what they can do. In the past the UW rowing team has been held back by what they perceived they couldn’t do, Bryans said, but she believes that has changed.

“I think with the success we are having both here and at the national level, those kids that are at the Under 23 camp are going to come back with a higher level of expectation with their teammates,” Bryans said. “And the good news is their teammates are ready to run with that.”