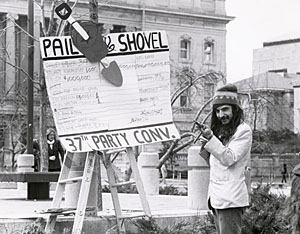 As the leader of the Pail and Shovel Party, Leon Varjian’s memory will continue to live on through the notorious pranks he facilitated during his time spent on the University of Wisconsin campus.

During his time at UW, Varjian spent little time studying and a lot more time goofing off. Notorious for his crazy antics and wild pranks, Varjian’s legacy as a “legendary” prankster lives on to this day.

One of his most famous antics includes his campaign, the Pail and Shovel Party.

According to one of Varjian’s close friends and former Pail and Shovel Party member Stu Baker, Varjian started the campaign to “stir things up” on campus.

“Leon was a charismatic person that just drew people in and it was an amazing time in terms of creative energy,” Baker said.

Varjian wanted to engage UW students and the community in new and different ways than had been done previously, Baker said.

With his creative synergy, Baker said Varjian attracted people to him. His pranks, including the infamous covering of Bascom Hill with flamingos and raising campaign funds to put the Statue of Liberty out on Lake Mendota, encouraged others to join him.

Another project Varjian successfully campaigned while in office was giving one-penny rebates to all of the students who finished registering for classes and paying their tuition. Baker said they spent an entire week gluing pennies to cards to hand out to every student on campus.

“Leon was able to rally the troops and make these ideas happen, even if they seemed implausible at the time,” Baker said.

The Pail and Shovel Party even received an award from the Milwaukee Journal Sentinel for keeping more campaign promises than any other politician in Wisconsin history, Baker said.

Another close friend of Varjian’s, Jim Mallon, was Varjian’s running mate as vice president of the Pail and Shovel Party.

Mallon said he first met Varjian during registration week when Varjian was petitioning for UW’s name to be changed to University of New Jersey.

Why did he want to change the university’s name? Mallon said the rationale was that New Jersey had no universities named after their state while Wisconsin had 13 at the time. Varjian believed Wisconsin could spare one, Mallon said.

Despite his energetic nature and creativity, Varjian was actually a complex guy, Mallon said. Very often when people met Varjian they were really meeting his onstage personality.

“Very few people got to meet his offstage personality and experience the thoughtful and kind man hidden behind his crazy exterior,” Mallon said.

During his time at UW, Varjian’s ideas were for the most past well received and liked. University administration admired Varjian’s forward thinking and the incredible marketing value he contributed to UW, Baker said.

Today, some of Varjian’s antics are still present around campus. His filling of Bascom Hill with flamingos is now part of a fundraiser on campus, and every winter the giant Statue of Liberty can still be seen displayed on the lake, Baker said.

Baker said it always amazes him that certain things started by himself and Varjian still exist.

“I hope he will live on in spirit even though his pranks will no longer continue,” Baker said.