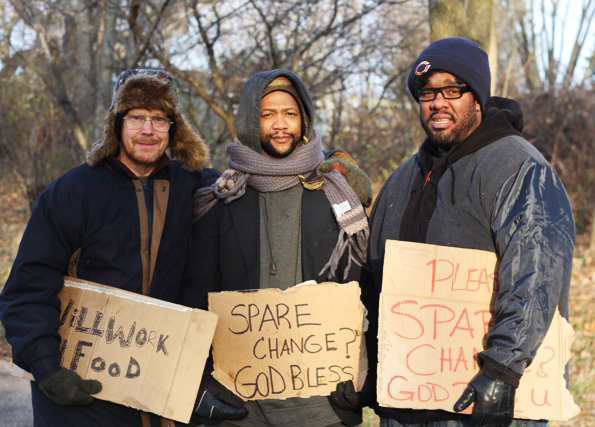 Three friends and local business owners temporarily set their lives aside last week to walk a week in the shoes of Madison’s homeless community.

Michael Johnson, CEO of the Boys and Girls Club of Dane County; Will Green, director of Mentoring Positives; and business owner Tim Metcalfe of Metcalfe’s Market spent Nov. 13 to Nov. 15 sleeping on the street and living without money, showers or private bathrooms.

Johnson said his personal experiences, along with occurrences at the Boys and Girls Club, inspired him to try the idea, noting homeless children often visit the clubs.

“For someone that grew up in poverty for half my life and worked in impoverished neighborhoods, I wanted to see what it looked like up close without the weigh-in of being the Boys and Girls Club CEO,” Johnson said.

Although the group was admittedly unsure how people would treat them, both Johnson and Green said they were surprised by the generosity of the local community, offering them anything from money to meals.

He added businesses were friendly to them as well, often offering them hospitality.

“We walked into two different stores and both offered to feed us and give us food to go,” Johnson said.

Both Johnson and Green said the other homeless people they interacted with were almost never negative and many had a strong sense of “self-pride.”

People within the homeless community were also eager to lend a helping hand, whether it be showing them where to get an ID or pointing out a good location to spend the night, Green said.

“People knew we were new, but still went out of their way to give us information and help us navigate the system on what we need to do,” he said.

Johnson said many of the people in the shelters were employed and went to their jobs in the morning just like everyone else.

He said there is a constant cycle people go through to get their lives back on track when they are homeless. This includes trying to save money until an affordable housing opportunity arises and living in the shelters in the meantime, he said.

However, they said effective solutions to these problems are not out of reach.

Green said there is the idea of organizations “adopting” a homeless person or family and providing support for them, as well as encouraging the public to donate to programs such as the Salvation Army.

He remains hopeful the community can work together “one step at a time to find a unified system” and not be discouraged by the severity of the issue.

“People see things as such a big problem that they think they can’t attack it,” Green said.

Johnson and Green said they hope their actions will urge more people to help the cause, even if it is just giving away a few dollars to someone in need.