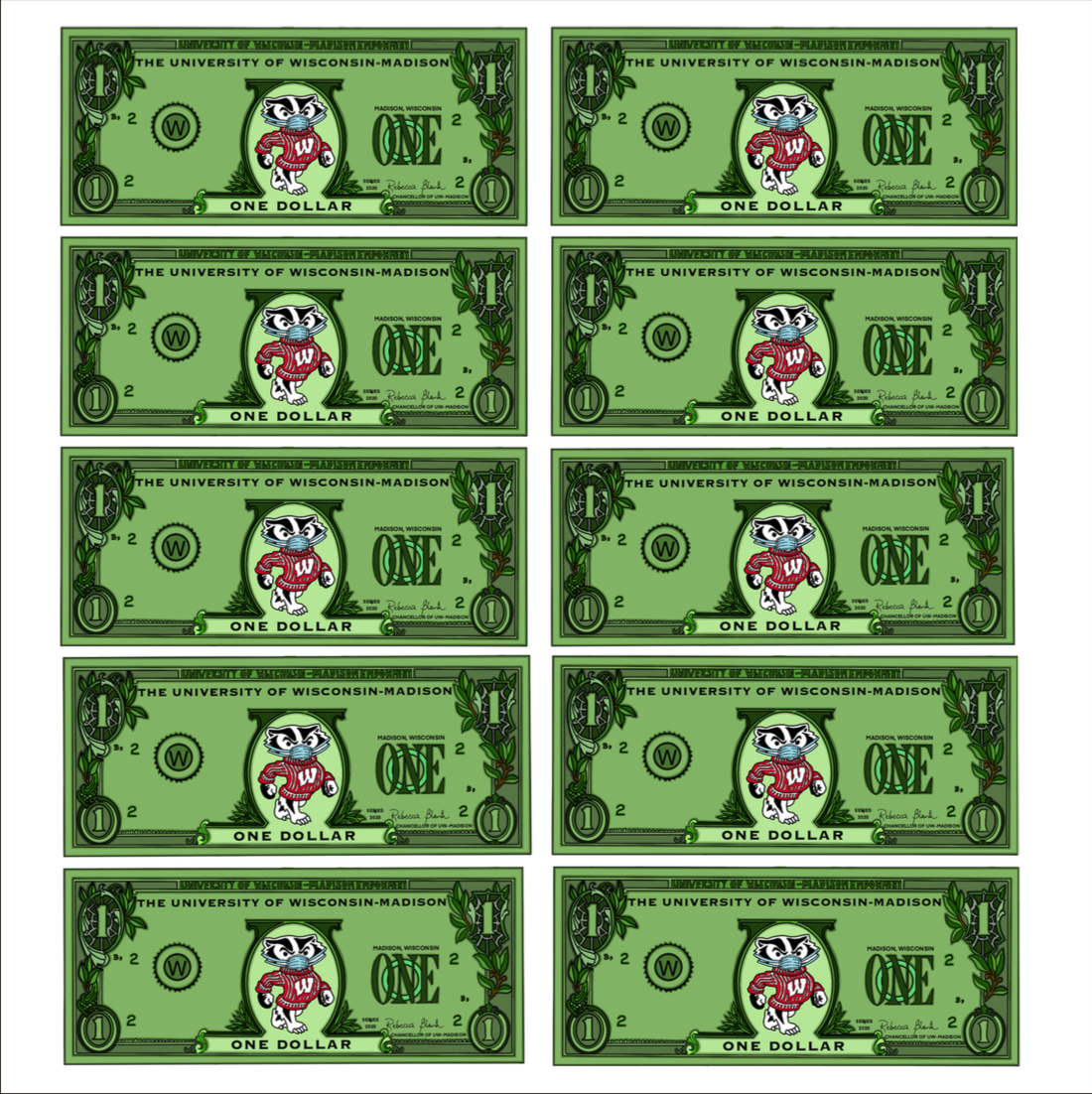 When COVID-19 hit, the world came to a standstill along with the funding for hundreds of universities across the United States. With students moving out of dorms in March, the Big Ten sports season being cancelled, and large cuts in future state funding, the University of Wisconsin is grappling with the enormous, looming loss of hundreds of millions of dollars.

It therefore might be understandable why UW would continue to charge students the same tuition as it normally does for the fall semester.

UW student Annabelle Stimmel, however, raises an important question — is it just for universities to continue to charge students the same tuition in the middle of a global pandemic?

On the other hand, UW junior John Spengler thinks keeping tuition costs the same is a “practical necessity.”

“The university is already hemorrhaging so much cash from the loss of sports to people choosing to defer a year or semester from their enrollment, from people who choose not to come to housing,” Spengler said. “If the University is gonna attain any semblance of monetary solvency, I don’t think they have much choice.”

Many students are thinking of taking a gap year or deferring their enrollment to the spring semester. Interestingly, according to preliminary data, enrollment on the first day of classes at UW-Madison stands at 44,010 students, which suggests a modest 1% decline from 2019.

In a blog post, UW Provost Karl Scholz said, “The costs for UW-Madison to deliver world-class instruction have increased during this pandemic, and the prices of any good or service depends critically on costs.”

Earlier this year, the University of Wisconsin System Board of Regents approved a tuition increase for international and out-of-state students for the 2020-21 school year.

“Far too many students who drop out or delay never complete their degree. I do know that the opportunity cost of delaying college attendance is considerable,” Scholz wrote. “The value of a college degree likely increases in difficult times. Moreover, one delays entry into the post-college workforce (which is typically characterized by higher earnings than those who do not attend), if one delays their studies.”

Eric Grodsky, professor of sociology and educational policy studies at UW, said even though it’s “not the end of the world” to defer, evidence suggests students who defer for more than a couple of years are less likely to finish their degree. In particular, low-income students are more affected by an incomplete degree than moderate or high-income students.

“It’s not the kids who finish college that you should be worried about with debt — it’s the kids who don’t,” Grosky said.

Stimmel, who is a junior, created a petition to demand decreased tuition for the fall semester. As of Sept. 7, the petition has amassed almost 2,000 signatures.

“I started the petition because I was planning for the fall semester and looking at the costs that would be incurred and I realized that for me, paying tuition might be a struggle, and for others it most likely will be the same as well,” Stimmel said.

Stimmel feels apart from classes, students pay for a college experience that includes living in dorms, access to dining halls and a sense of community through clubs and networking with professors.

In addition to a typical college experience, many students who are choosing to live at home this year — particularly those who are international and out-of-state students — will not have the opportunity to access numerous on-campus services they pay for.

“You are not paying for what you normally would pay for, which is the in-person experience,” Stimmel said. “With that being said, I don’t think that students should have to pay the cost of facilities and student life when they are not benefiting from those.”

In an email statement to The Badger Herald, UW spokesperson Greg Bump said though UW acknowledges the financial impact the pandemic has had on students and their families, segregated fee services are not set up on a user-fee basis. Instead, they are set up to provide services for all students.

“Since the campus went virtual in March, we’ve made sure all students continue to have access to many of the services provided by segregated fees in a virtual way. And that will continue to be the case this fall,” Bump said.

“We are committed to continuing to provide high-quality virtual services to all students, whether they are in Madison or elsewhere for the fall semester,” Bump said.

Some students, like Stimmel, think UW has not done enough to aid their low-income students.

“I kind of feel like the university has not done enough to acknowledge the financial disparities that occur between different societal groups,” Stimmel said.

Stimmel thinks online classes and current tuition fees do not consider low-income students who may not have access to technology and computer requirements for online classes.

“It keeps in mind a very middle-class, American family [that] has the resources to work online and to do their classes from home, to pay regular tuition, to remain on a stable income, and I don’t think that they are taking into account different groups who aren’t as privileged,” Stimmel said.

According to Grodsky, though the sticker price of college has increased significantly, the real cost of attendance has not increased as much. In addition, Grodsky said despite rising tuition, college access has not changed considerably.

“The percentage of kids from disadvantaged backgrounds who go on to a baccalaureate college has been increasing,” Grodsky said.

Students who find it difficult to pay tuition can fill out the FAFSA, also called the Free Application for Federal Student Aid, and apply for financial aid.

Greg Offerman, Associate Director for Advising & Outreach for the Office of Student Financial Aid, said he is a lot “busier” this year talking to students and their families to see how he can help.

This year’s FAFSA is based on 2018 tax information, but a lot can change, even under normal, non-pandemic circumstances. The Office of Student Financial Aid at UW is working with students and families to update FAFSA results and make it more accurate with their current financial situation, Offerman said.

“There has been at least an increase for sure in the number of financial aid requests, so we do everything we can to help students qualify for some of our programs, such as the Bucky Tuition Promise and FastTrack,” Offerman said. “I think right now is a good time as any to invest in yourself and invest in higher education, especially when jobs become less available.”

The Office of Student Financial Aid also provides greater college access to low-income students dealing with the consequences of the pandemic.

Bump said the legislature and governor vote on spending for state agencies, including the UW System, every two years. This includes capital projects, such as building construction.

In a statement to The Badger Herald, Associate Vice Chancellor for Finance David Murphy said the development of the annual university budget begins by estimating the size of the revenue base for the coming year. The major drivers are student enrollment, state support, federal grant activity and philanthropy.

Senior leadership — such as Chancellor Blank and Provost Scholz — individually meet with each Dean and the unit heads for the major administrative areas to review their multi-year fiscal plans and assess their priorities and concerns for the fiscal year.

Murphy said UW compares the revenue base to committed costs for the upcoming year (e.g. financial aid, faculty salaries, utilities, etc.) and remaining revenue is used to increase the budgets of some units.

“Of course, if we believe that the revenue base is inadequate to fund our current commitments, then units may be forced to reduce their budgets to ensure we maintain balanced operations,” Murphy wrote. “Given the size of our university and the uncertainty of some revenue streams and cost factors, we do work to maintain a level of reserves to address any budget shortfalls.”

For administrative costs, Murphy said 16.8% of fiscal year 2019 expenditures fund university support units, and the largest support unit is Facilities Planning & Management. Major costs in this unit include custodial services, operations and maintenance of buildings and grounds and utilities.

Higher-education institutions in the US are observing a sharp increase in administrators and their earnings, with tenured faculty appointments declining significantly. According to the New York Times, this trend, however, is not linked to increased institutional funding by the state or federal government.

According to recent data by the Chronicle, a dozen public university presidents and 64 private-institution presidents earned over $1 million per year through their salary, bonuses and deferred compensation. In 2008, that number was 28 for private institutions. Interestingly, according to the American Association of University Professors, tenured faculty positions in universities have declined by 26%, while part-time instructional faculty appointments — which have similar responsibilities to tenured faculty but are paid less and have higher job insecurity — have shot up by 70%.

One of the reasons why UW is continuing to charge full tuition, according to Scholz, is UW has heavily invested in improving course design and remote learning experiences. In addition, it has also developed resources for COVID-19 testing, contact tracing, UHS and student support.

Stimmel said she strongly believes UW should publish reports or audits on how testing will increase their costs. She said she wants UW to involve students more in the discussion, admit some vulnerability in it and be straightforward.

UW System Director of Media Relations Mark Pitsch met inquiries about the process of determining tuition rates with the following lone comment, “Whether we provide online, hybrid, or in-person classes, we will continue to deliver a high-quality learning experience for our students in accordance with the tuition set by the Legislature.”

According to the 2019-20 budget report, federal aid comprises 28.5% of UW’s revenue while state aid comprises 14.3% of the total budget. The second-highest source of funding for UW is tuition and fees, which makes up 20.2% of the budget at $642 million.

“I think things are gonna get a lot worse economically before they get better and I think the same is true for the university,” Grodsky said. “The question will be, to what extent does the State try to balance its books by cutting the university — which historically it’s done and that’s led to us increasing tuition and fees.”

By cutting state funding, Wisconsin legislators have shown their desire to be less financially obligated to the UW System while maintaining tighter control over its operations.

According to Grodsky, the main wave of COVID-19’s economic impact is not going to hit until late 2020 or early 2021 and that is when families are going to be crunched for money.

“With such inaction at the state and federal level to try and provide better funds for public institutions, I think [UW’s] hands are kind of tied, so obviously I would prefer if I or my family was paying less money for an education that I think I’m probably not going to get as much value out of as I would have otherwise,” Spengler said.

Meanwhile, Stimmel said families shouldn’t be burdened because the university’s losing money and it’s the university’s responsibility to figure out a different way to find the resources they need.

“Personally, I don’t believe that the cost should be put on students or their families if they’re contributing, but sometimes the university doesn’t know what else to do if it doesn’t have the state or the federal funding that it needs or it was used to previously,” Stimmel said. “It’s part of a much larger discussion around education funding in our country.”