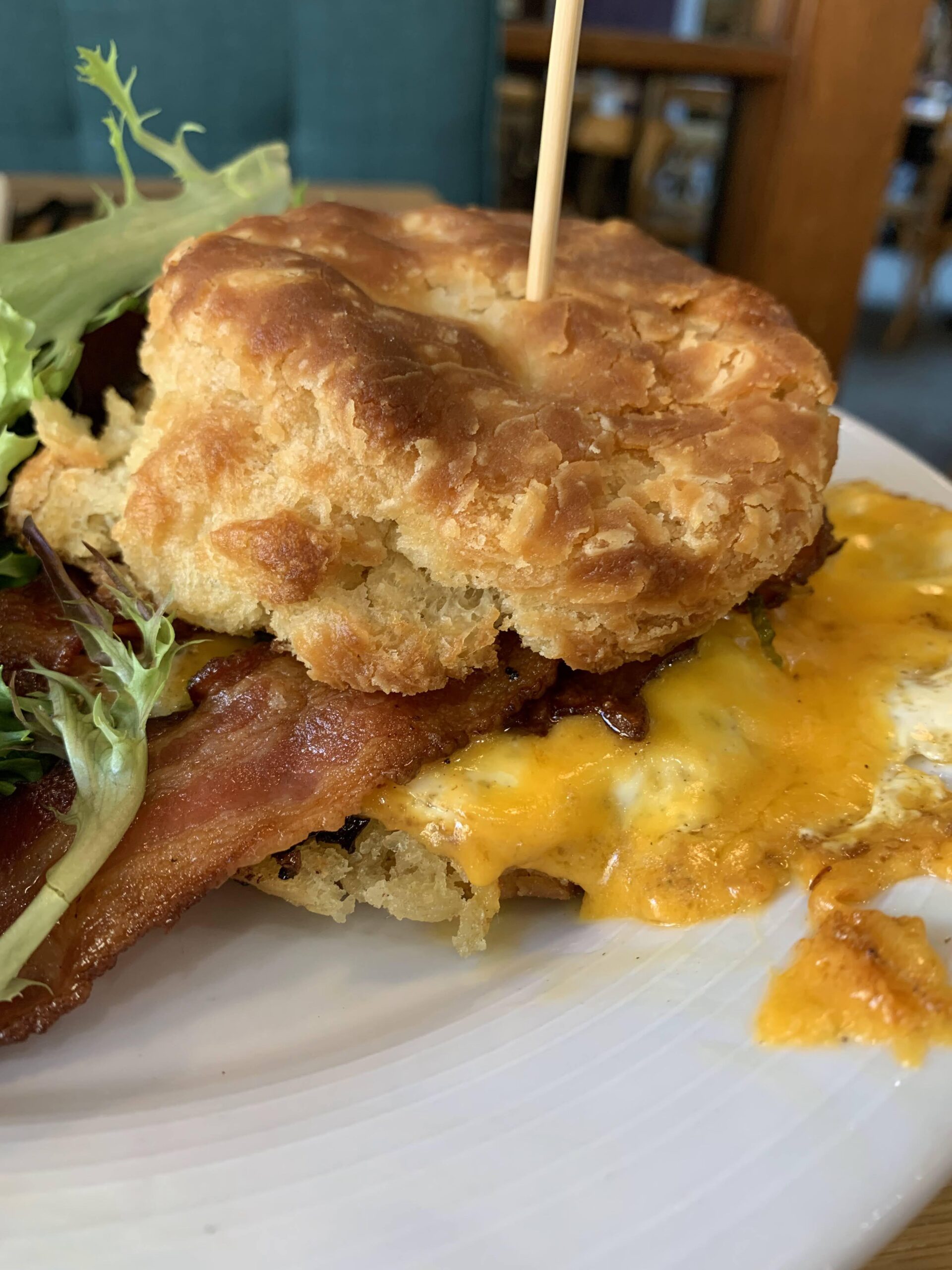 A friend of a friend recently told me that kinda ex-girlfriend (it’s complicated) had read my 2021 article, “Complete, unpretentious review of Madison’s breakky sammies.” As a result, this person actually got up out of their sitting area and tried Gotham Bagels for the first time!

“They really are the best breakfast sandwiches in Madison,” she said.

A miracle! It was upon hearing this inspirational story that I was reminded why I do this work. To save, nay, start lives.

I’ll be honest, I’ve had a busy school year. So, the list of breakfast sammies below is primarily a convenience sampling — Isn’t it funny I know what that is? (I’m in a psych class this semester). For consistency sake, I like to order a standard BEC (bacon, egg and cheese). While sausage is darn tasty in the morn, it is a meat that easily conceals the taste of a sandwich with otherwise shitty ingredients. I need authenticity, sweets.

On this journey for a tasty breakfast, I’ve found sandwiches I seriously dislike. But I’ve also found some of my literal favorites. Keep reading to find what’s a hit and what’s a miss, baby.

TLDR — Some may enjoy this (some have bad taste)

I was hesitant to try this sandwich due to a previous negative experience, and I was still let down. While I find the “veggies” listed in the menu charming, let’s be frank — tomatoes don’t belong on breakfast sandwiches. I wasn’t mad at the spinach and raw onion though. And that is, unfortunately, where my positive review ends.

Valentia’s egg? Chewy … which is surprising considering they crack it fresh. Not sure how this can be remedied, but salt and pepper sure would be redeeming. I was quite excited to try the “spicy garlic Aleppo,” but in the end, I wish they would have just left it off. I tasted neither garlic nor spice during my interaction with a rather tangy (in a bad way) sauce that coated the entire sandwich. Perhaps the Aleppo had gone rancid, or maybe they just needed more of a plain base.

Scaring me into thinking I had a run-in with COVID-19 (and thus had lost my sense of taste), neither the bacon nor the cheese really shone through in a way that could have made this sandwich any better. Damn Aleppo. I strayed from the everything bagel to try their asiago, which was untoasted. Why would anyone want an asiago bagel … untoasted? It defeats the whole purpose.

Regardless, around $8 with their gratuity-included system isn’t bad for a breakfast sandwich. It’s also not great. Though I always expect a little more from Valentia, I have to remind myself the understaffed shop conveniently located for humanities majors is extremely hit or miss. I’d much rather try their lunch next time.

TLDR — The croissant is what sold me

Given that Colectivo doesn’t have a bagel option, (their norm is an English muffin …) I had to opt for a croissant. It’s gotta be a helluva good muffin for me to want to eat that at 8:37 in the morning, and I just can’t take that chance.

The croissant, although much messier, was a much safer choice for my preferences. All of Colectivo’s breakfast sandwiches consist of an egg frittata — which is a clever way to just have a pre-cooked egg — and it really wasn’t that bad, although perhaps a little stringy.

I got the Canadian bacon, which is quite different than normal bacon, and quite a bit more disappointing. It was hard to eat, both because it was chewy and the sandwich kept falling apart. It could have been, I don’t know, saltier or pan fried or something. But this was my fault for straying from bacon.

The cheese was the real winner here. Perfectly melted on the croissant, it was the first thing I saw that made me initially think this was a 4.5/5. Excited as I chowed down, I soon became bored and annoyed. The croissant was the winner here, even as it flaked onto my scarf and got stuck on my uvula.

Note: I went back and had their English muffin (simply because they were out of croissants — it was not by choice), and I stand by my word. The muffin was chewy and hard to penetrate. It felt like a task rather than a treat.

Miss — My current place of employment

I’m wary to write this review as a recently hired employee of [redacted] — but I believe the general public should know the monstrosities that I, too, had to witness. After being trained on the “kitchen” — otherwise known as the microwave — it is shocking and disgusting that I would even choose to make myself a breakfast sandwich.

The components? 1) A perfectly rounded, artificially yellowed egg patty, 2) a locally sourced scoop of cheese (perhaps the only win in this scenario) atop said patty, 3) two of the flimsiest, nearly transparent bacon slices and 4) a bun. Like, a bun that you would eat with a cheeseburger slider. Who the hell sells a breakfast sandwich on a bun? I’m sick.

So after microwaving components 1, 2 and 3, I hesitantly placed “egg” on “bun.”

The cheese — and egg, even — was completely overshadowed by the sad excuse for bread. The bacon (usually my favorite part) had completely exited the room.

The only thing that could save this burning shit pile from the depths of hell would be a greasy, chewy, sausage patty. Love, try sourdough, a bagel? HELL, an English muffin? Anything to revive my burnt-off buds.

Dramatics aside, I enjoy Indie’s food in general. So, naturally, their bacon, egg and cheese dances on my tongue like a midsummer’s fairie on a mushroom top. No, their bacon is not necessarily high quality. Their egg may be frozen and revived in the microwave. BUT the cheese, the bagel, the semblance? Perfection.

They take their perfectly crafted everything bagel and press it in the panini press (MAGIC!). This brings ease for the eater, seasoning to the bread and classiness to the ‘wich. The cheese perfectly complements the bread, actually being present in the sandwich instead of getting lost in the sauce (or lack thereof). It was genius, it was perfect, it was a 9.5/10. The only thing I would have added would’ve been a thick-cut slab of pig. Bravo to you, Indie.

*I would not call this the best breakfast sandwich I ever ate, but it’s definitely among my favorites. Props for simplicity and price.

TLDR — I hope this is a fluke, but it’s hard to say

I’m going to keep this one short, because I’m tired. Tired of bad breakfast sandwiches, that is. You know when you cook an egg yolk too long and the texture turns into playdough that’s had its cover off for too long? Yuck.

I can’t tell if this was a one-time slip-up for Mikey’s, or if their ‘wiches are always like this. I really didn’t dislike their other components, but when the egg’s bad, the whole shebang’s bad. I’d try it again, but not anytime soon.

I’ve been to Cafe Hollander twice in my life. It’s far, it attracts mainly middle-aged people and it’s pretentious. As pretentious as an eclectic local chain in the middle of an outdoor mall can be.

Hollander knows it’s good, but in my eyes, it was pure mediocrity. Though, I had heard good things about their breakfast (perhaps because Hollander is also a bar). I was pissed off after seeing that their breakfast sandwich was $14. Fuck you, Cafe Hollander.

But after the steamy, cheesy behemoth of a sandwich arrived in front of my face, I understood. Eggs, scrambled instead of fried. A salty pretzel bun in place of a bagel. Two types of cheese. Two types of protein. I. Was. Enamored.

It was literally the best breakfast sandwich I’ve ever had. And that’s not even counting the perfectly fried rosemary-crusted breakfast potatoes on the side. While the ‘wich was a tad messy, every bite delivered four levels of texture, complex flavors and pure and utter genius. If it weren’t so expensive, I would make the commute and buy this sandwich every day. And, maybe it was the taters, but I walked away from breakfast stuffed to the brim (an unusual occurrence in the breakfast sammy realm). 10/10, Hollander. It was worth the hype.

Wonderstate — Actually one of the best breakfast sandwiches in Madison. It’s absolutely dripping in cheese if that’s your thing, and really filling. I recommend this to any breakfast sandwich aficionado. 4.95/5.

Ancora — Once again, pricey. But, boy oh boy, you will not leave disappointed! Chef’s freakin kiss, baby! 4.85/5 (for messiness).

DLUX — Pretty good. Did not adore the bread, but had hardy bacon. Needed mimosa to wash down. 3.75/5.