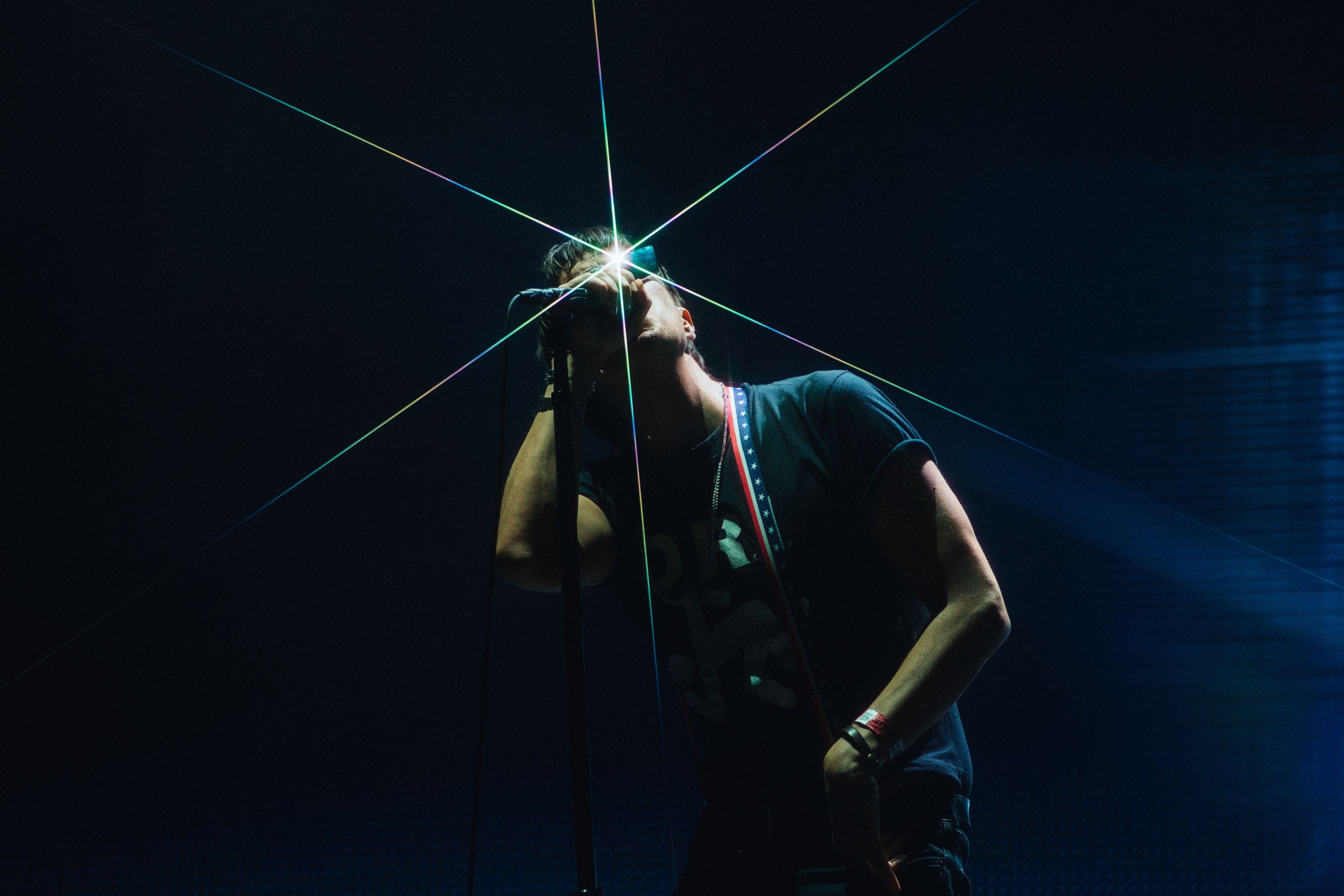 While the fantastic weather blessed music lovers to begin Lollapalooza in Chicago on Thursday, acts like The Strokes and Haley Kiyoko made the day even brighter. For those who couldn’t get a ticket, here’s some of the highlights after the first day at Grant Park.

You know what goes great with sunshine and a calm breeze? Morbid and disturbing attempts at death metal rap. The Florida rapper took the crowd at the newly named T-Mobile stage to a whole other spectrum. Clearly inspired by the duo $uicideboy$, some tracks would certainly scare fans of other genres away by repeating lyrics such as “Die, die die!” While other songs proved more held back aggressiveness and promising lyrical flow, the attempt to be Korn was a little cringeworthy. The talent is there, yet the execution may only attract a niche group. At least a friend of the group got a tattoo on his face while they performed. What an idiot. 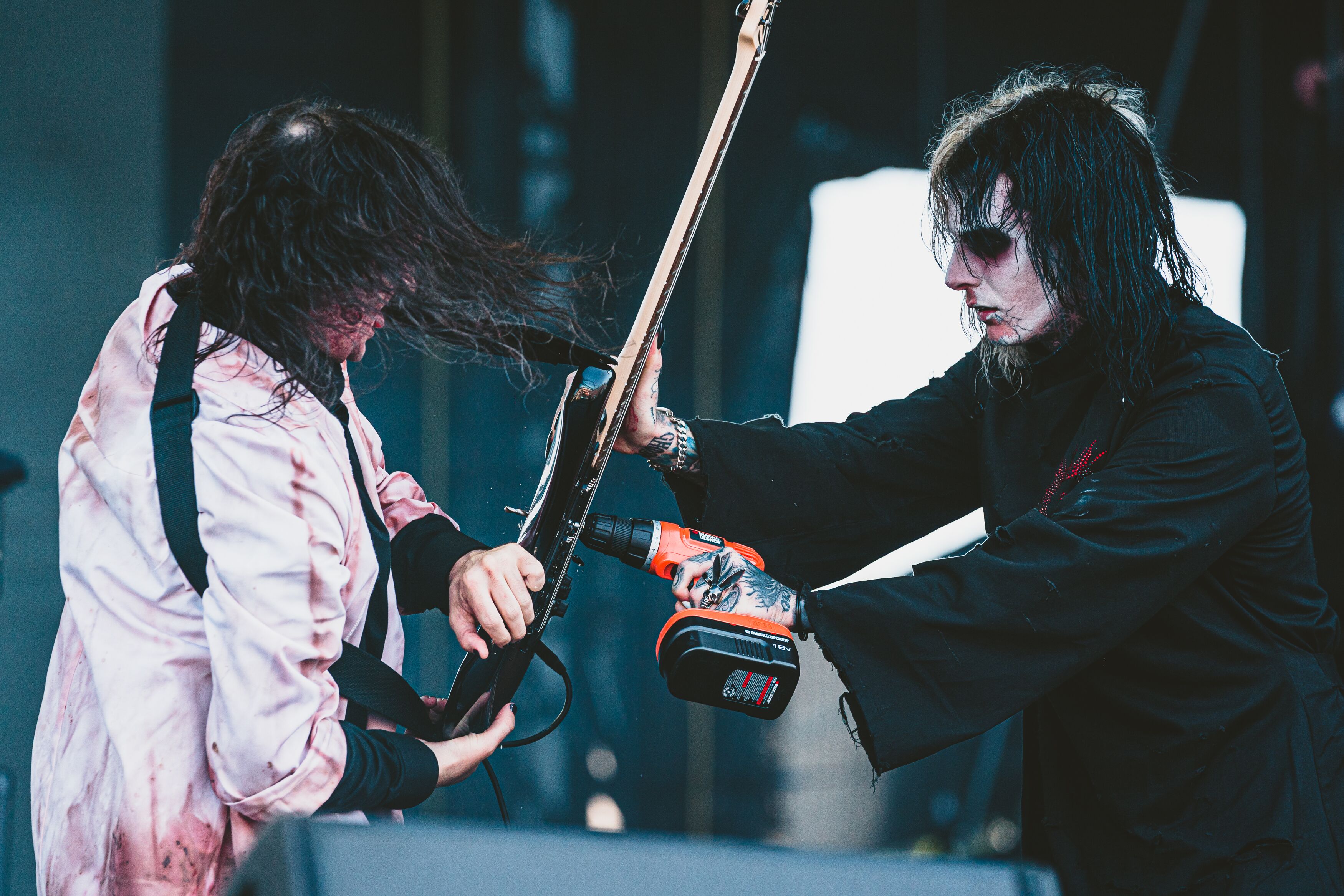 Not much positivity came from Ghostmane on Thursday.
Roger Ho/Lollapalooza 2019

The former Fifth Harmony member proved her immense talent with a choreographed display at the Lake Shore stage. Covering Rihanna songs like “Diamonds” after full dance routines proved to be a job for Normani. The vocalist was breathing heavy while talking to the crowd between songs before jumping back into her intense set. Tune, pitch and key were never off, but the star never showed off her vocal range the way the crowd was hoping. Aside from narrowly missing a perfect set, there’s shockingly little to critique about Normani. Struggling to find flaws in a live performance says a lot. 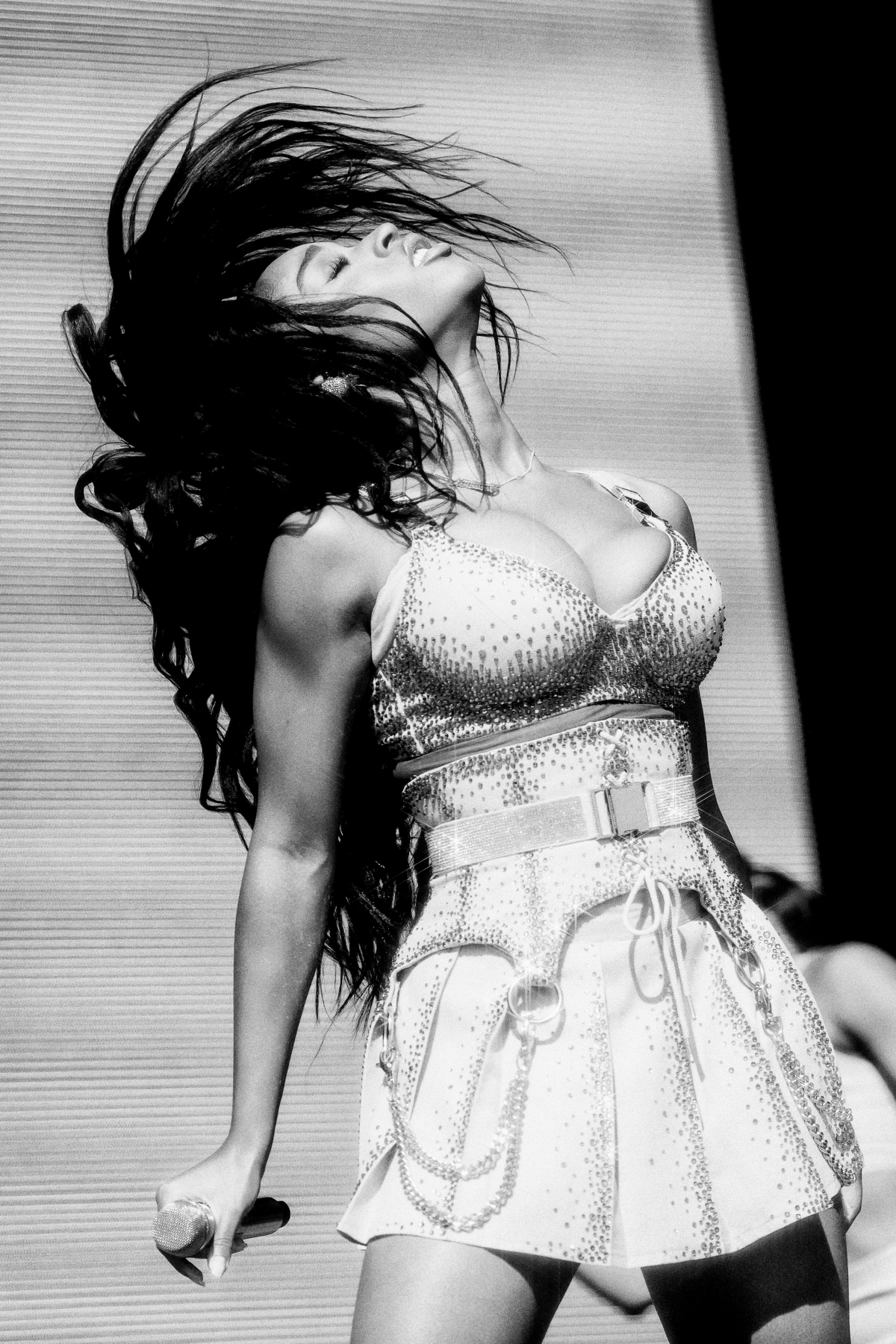 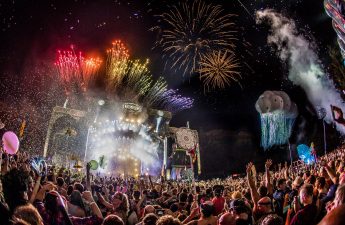 Forest Family members share memories made through chance encountersFrom wedding ceremonies and celebrations to the random, unexpected encounters taking place at Electric Forest, there seems to always be Read…

Affectionately called by fans and peers as “Lesbian Jesus” the former Disney Channel star followed up Normani at Lake Shore. The pop artist was accompanied by an impressive band alongside two dancers in matching flannel and denim attire. Kiyoko also had a significant amount of choreography in her performance, while not going so hard as to miss a vocal run. Tracks like “Girls Like Girls” and “Curious” delivered the same punch lyrically live as the original recordings. The anthems showcased the confidence she has when it comes to covering sexuality and not connecting to certain individuals in her personal life. Though there are not many openly gay female artists in the industry, it did not appear difficult for Kiyoko to sing about liking girls in front of an audience, especially with a voice as full as hers. 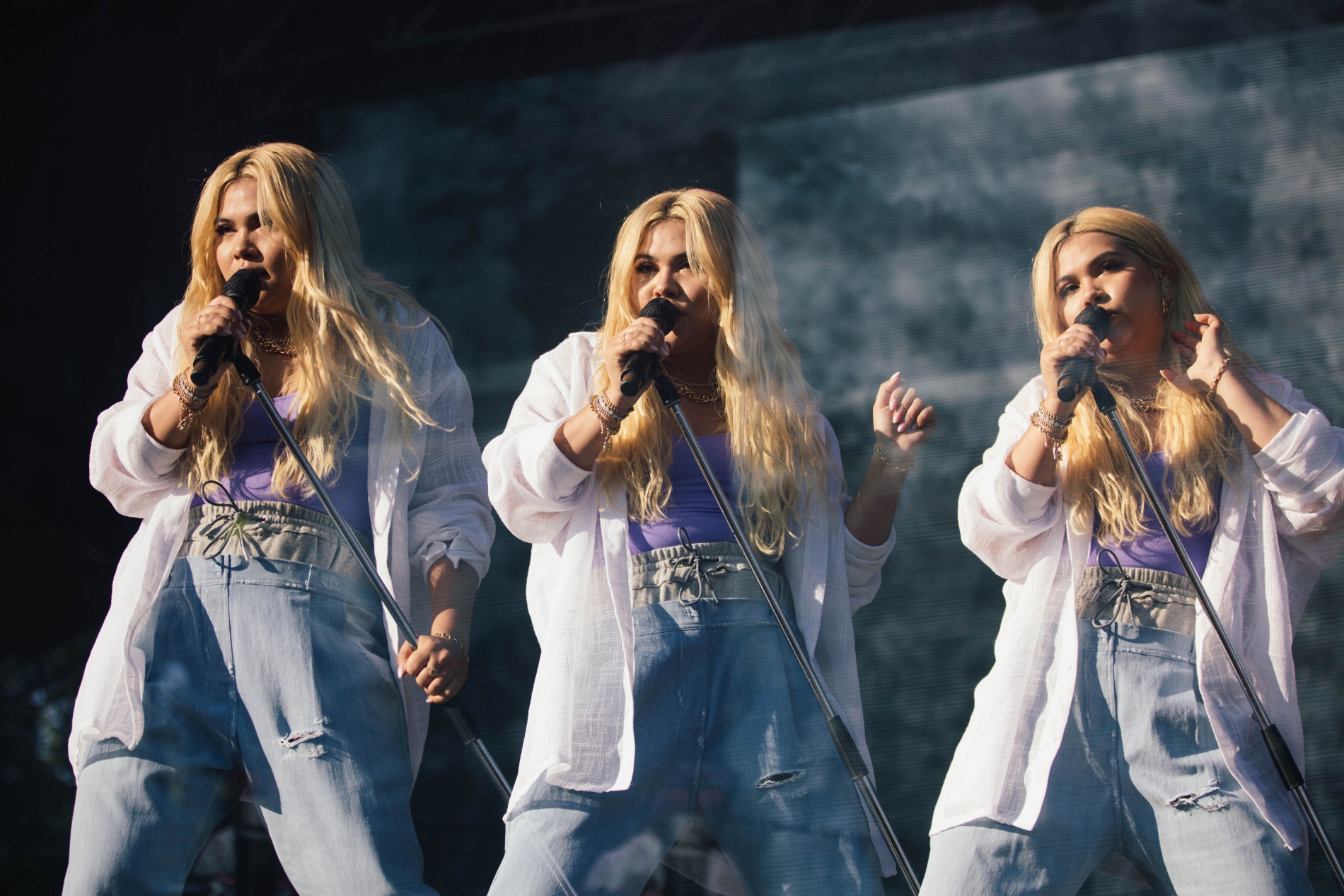 Whoever is Mikaela Straus’ publicist needs to be fired. The 20-year-old Brooklyn, New York prodigy under Mark Ronson officially became a star with her Lake Shore show at Lollapalooza. Performing in front of arguably the biggest crowd of her career, King Princess brought her rock-pop flare with “Upper West Side” and “Cheap Queen.” Catchy hooks and captivating bridges were to be expected, but meaningful guitar play was a treat. With a great deal of confidence, King Princess moved to one of her newer songs, “Prophet.” Expected to be released with a new album in October, the song struck well early in the set with a sharp truth toward romance. “Honestly, it’s the price of the prodigy you wanna be/Oh, no apologies, twisting your word and your policies.” 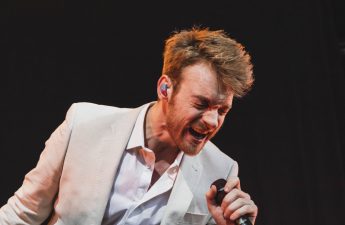 After a shoutout toward “my father” Mark Ronson with a cover of “Pieces of Us,” King Princess teased one of her bolder titles. “Oh you all want the pussy song don’t you?” The bubble gum pop beat dropped and “Pussy Is God” got everyone in attendance moving. The setlist became fully satisfying with the combo of “1950” and “Talia,” reigning in fans who have followed King Princess since she showed up on their radar just a couple years ago. The short but soon-to-be illustrious career of King Princess makes her performance in Chicago criminally underrated. Good luck trying to see her again for a cheap ticket. 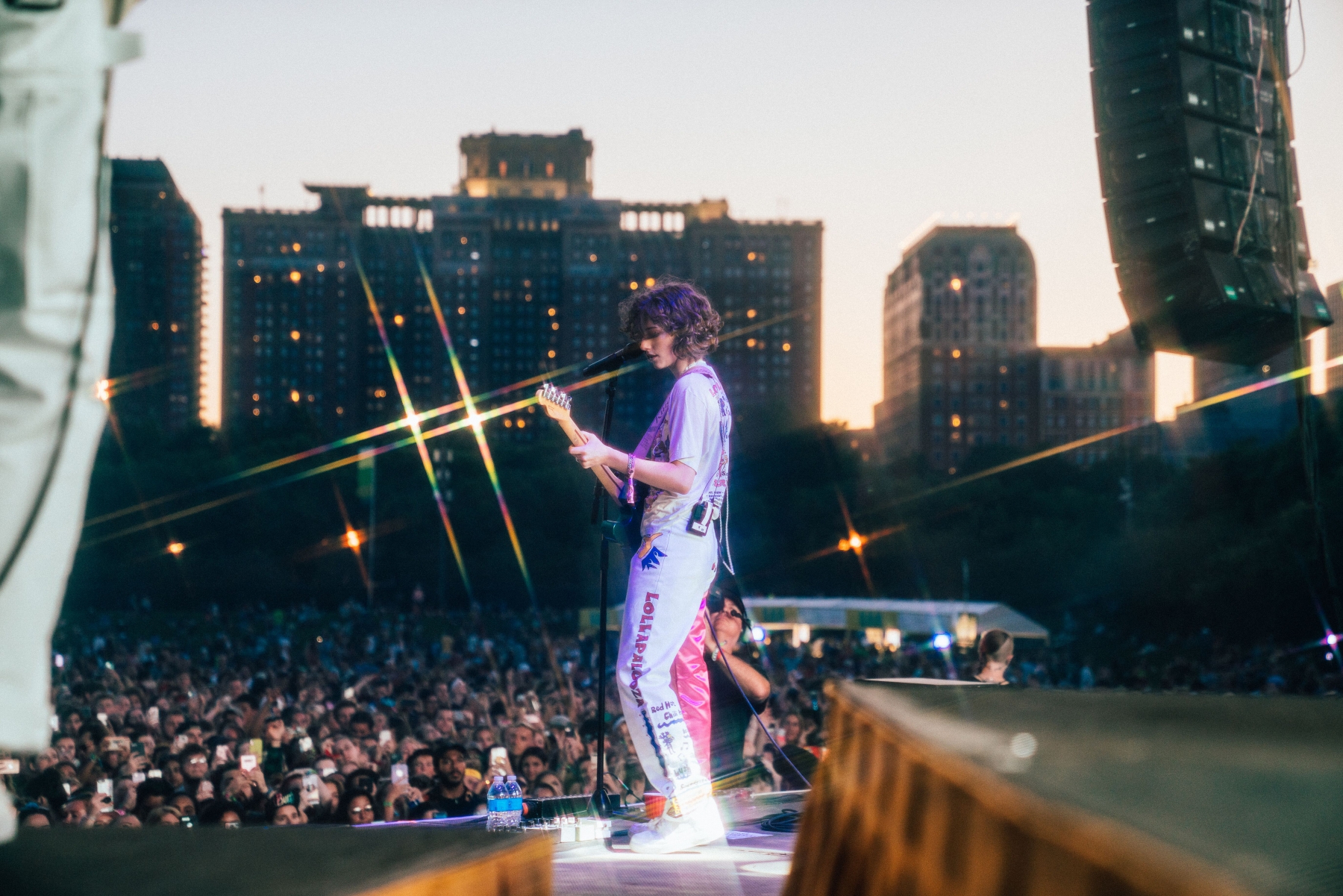 Lead singer Julian Casablancas is too talented for his own good. Clearly the inspiration of Arctic Monkeys lead man Alex Turner, the rockstar and his band went straight to work, playing “Heart in a Cage,” “You Only Live Once” and “Ize of the World” without pause. It became blatantly evident why the band works to keep the music going, Casablancas rambles: “I heard they call it the Windy City because of all the hot, political air. Actually now I’m realizing that was rude and I’m thinking out loud in front of all of you. Anyways more music!” Yikes.

After a sarcastic shoutout to the Chicago Police Department on “New York City Cops” and “Under Control,” Casablancas moved to another ramble that had more relevance. “I just want to sing along to whatever song is playing over on the other stage. But you see, that’s a little difficult for me.” While his drummer banged his sticks against his knees with impatience, Casablancas kept up his shtick before being told what song would be played next. 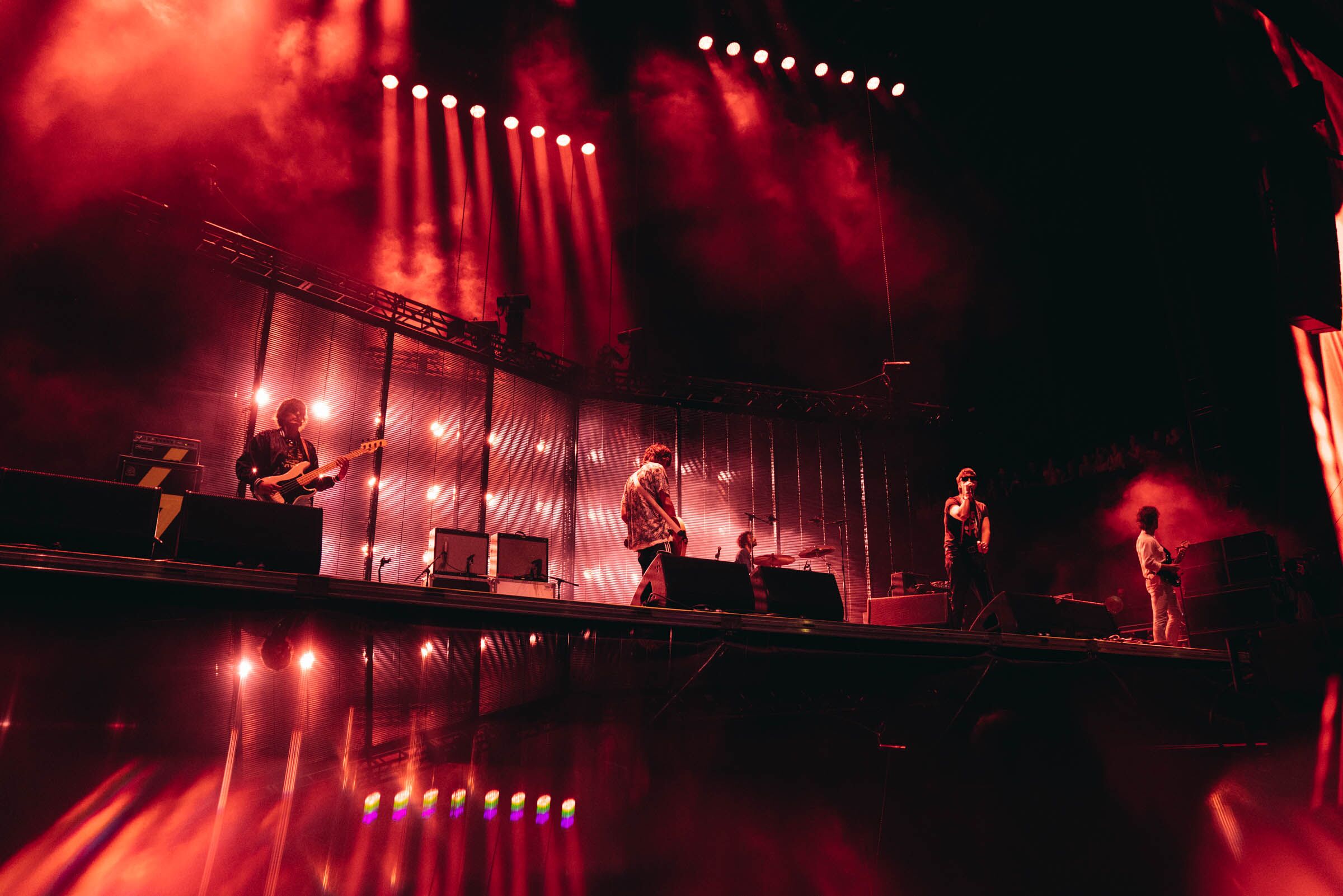 Casablancas appeared to be so drunk he didn’t know his setlist, but he’s so talented his voice never wavered from perfection. At one point the lead rocker gave an absurd vocal run before “What Ever Happened” while waiting for stage adjustments mid set. How can an artist consume so much alcohol that he’s staggering, using his microphone stand for support and can still blow thousands of fans away? 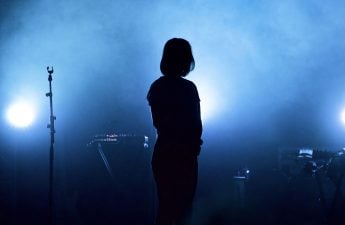 An encore to the shenanigans was demanded, with the group returning after “Someday” to play “Last Nite.” The return was prefaced with milder banter from the rambling vocalist. “They love drama,” Casablancas joked.

Coming off of the momentum from his XXL Freshman class cover and debut album release in July, Maryland rapper YBN Cordae kept the energy levels high going into his Lollapalooza performance Thursday afternoon.

Starting off with songs like 2019 single, “Locationships,” Cordae got the crowd excited as people were just beginning to pile into Grant Park. Despite the very recent release of this debut studio album, “The Lost Boy,” the rapper performed mostly old tracks that got the crowd moving. Prefaced by a Cordae-led “F*** the police” chant, the song “Target” from his 2018 mixtape had the crowd getting pretty rowdy.

While there were mosh pits so hyped that Cordae played his most popular song “Kung Fu” twice consecutively, there were also moments where Cordae’s message of faith, hope and perseverance shined through, like on tracks “Way Back Home” and “Bad Idea,” and by the end of the show, it seems Cordae had scored several new fans. 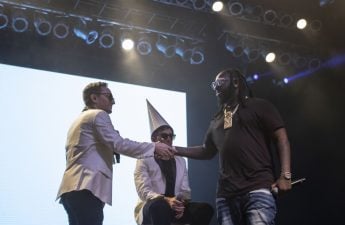 Before Saba even stepped out, the energy in the air at the American Eagle stage was palpable.

Making his entry to “SIRENS” from his latest album “CARE FOR ME,” the rapper started off the show with a chill vibe that built as the concert went on — and never came down. He played a perfect blend of songs from his first studio album, “Bucket List Project,” and his most recent release. One of the peaks of Saba’s performance was when he brought St. Louis rapper, Smino, onstage to help him perform the song “Sacrifices” from Dreamville’s recent release “Revenge of the Dreamers III.”

As the “frontman” of Pivot Gang, a group of rappers based out Chicago’s west side, Saba repped them as he always does at his shows. It was clear that the Chicago rapper and his crew were in awe of the crowd of people who showed up for them in their city, as Saba stopped to appreciate them many times. 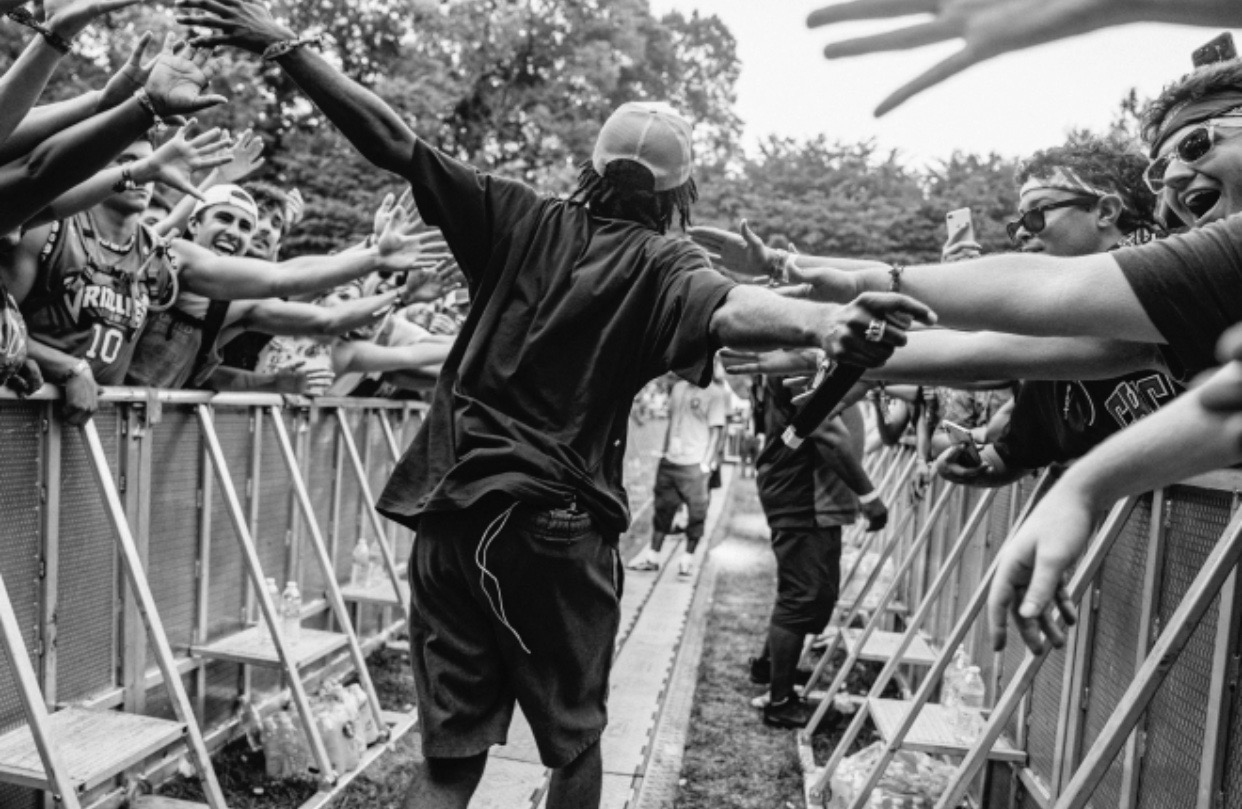 It was hard to decide between seeing headliners the Strokes or EDM-pop duo, the Chainsmokers, but Alex Pall and Drew Taggart left crowd members on Thursday night with no doubt that they had just witnessed a very special show.

The energy levels were high for the entire hour-and-a-half set, as the Chainsmokers played top songs from their own discography like “Don’t Let Me Down,” “Sick Boy” and “Closer,” with bass drops accompanied by glittering pops of fireworks. It was a meaningful moment when Taggart stopped the show for a moment to acknowledge the inspiration for the track “Everybody Hates Me,” which was his own anxiety.

The Chainsmokers brought out Bebe Rexha for their newest single “Call You Mine,” and even brought out Ty Dolla $ign for their song “Do You Mean.” The Chainsmokers truly kept the crowd on their toes, wondering who they would bring out next.  The last person we expected was Isaac Slade of The Fray, and it was a beautiful throwback moment as the whole crowd sang “Over My Head.”

The show ended with “Something Just Like This” and a glorious firework display. It was nothing short of a show to remember.

The sets of the first day at Lollapalooza provided a theme of underrated, rising stars and a legendary staple to culminate a well balanced lineup at Grant Park.