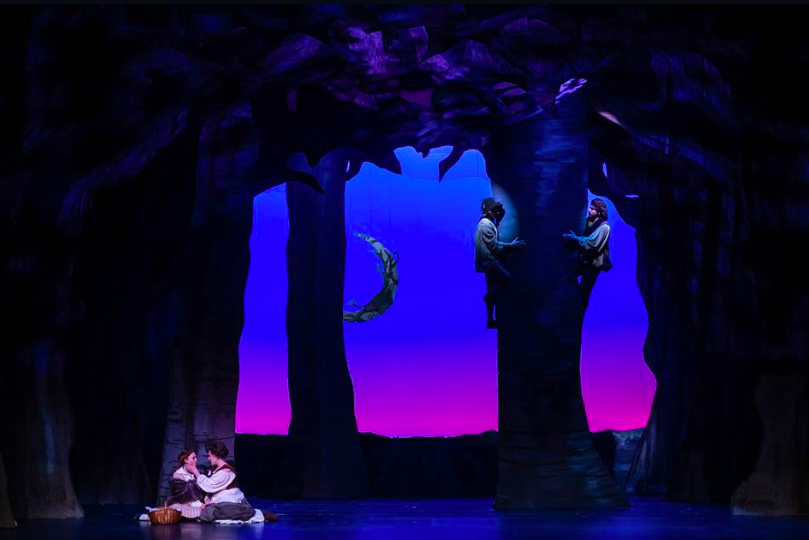 A delighting and enchanting performance of “Into the Woods” premiered at Shannon Hall in Memorial Union Thursday.

The musical, whose music and lyrics were written by Stephen Sondheim, incorporated different stories from the Brothers Grimm fairy tales.

More than 90 students performed in and worked on the production directed by Professor David Ronis.

Classic fairy tale characters like Rapunzel, Cinderella, Jack from “Jack and the Beanstalk” and Little Red Riding Hood appeared throughout the show. Interestingly enough, these characters, among others, intertwined themselves in a story that represented the harsh realities of life in the unrealistic setting of a fairy tale.

The plot line was based on the needs of a baker who had a witch place a curse of infertility on him. The witch promised him and his wife the ability to have a child by lifting a curse if they brought her “The cow as white as milk, the cape as red as blood, the hair as yellow as corn, the slipper as pure as gold.”

This lyric alluded to the classic fairy tale characters encountered through the rest of the show, setting up the interactions between the couple and these well-known stories.

Between the varied characters found in the story, common themes of life, love and loss emerged. Fidelity and revenge are additionally explored, particularly in the show’s second act.

These scenes appeared rather sultry, and some scenes in the performance are violent. People’s eyes are pecked out by birds, toes and heels are cut off to fit a shoe, and the Wolf acts rather sexually attracted to Little Red Riding Hood.

That said, the scenes weren’t visually graphic. Save a few screams during the show’s violent moments, the musical showed no blood or gore. 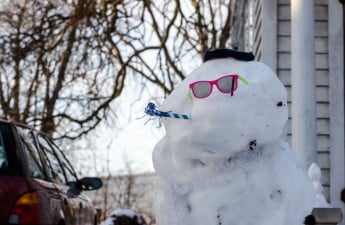 The woods were set with huge trees that were hung from the stage ceiling, and in the background hung a crescent moon. On the moon was a deer, whose antlers turned into branches that twisted around the edges.

During the performance, actors appeared to fly across the stage with the aid of cables. It allowed the actors to look as if they were climbing trees, beanstalks and towers, and flying.

The sound effects throughout the show were also impressive and dramatic. During one interaction between the witch and Rapunzel’s prince, the witch threw the prince off of a tree by using her magical powers. Coupled with another moment of flight, this moment was particularly effective.

Another dramatic moment came after the Wolf sang to Little Red Riding Hood when he decided he was going to eat her and her grandma once she arrived at her grandma’s house. He posed dramatically in front of an orange-lit background, where he howled a big “Awhoo!” before running off stage. 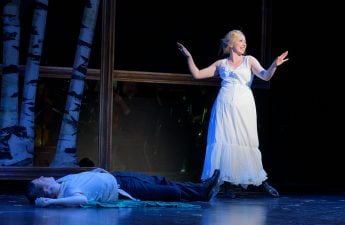 As a musical, “Into the Woods” had many operatic-sounding songs, which were done really well. Though this may have grown old for some, the music fit well with the fairy tales.

The first act was especially good. Following a traditional fairy tale narrative, it seemed like the majority of people’s problems had been fixed by the end of the act.

Despite how well done the musical was, the show could have ended at intermission. The second act was too long, and it took a few unnecessary and prolonged twists involving a giant. The actors and actresses held their enthusiasm though, along with the live music that played below the stage.

Overall, many production elements combined to make an entertaining show right on University of Wisconsin’s campus.