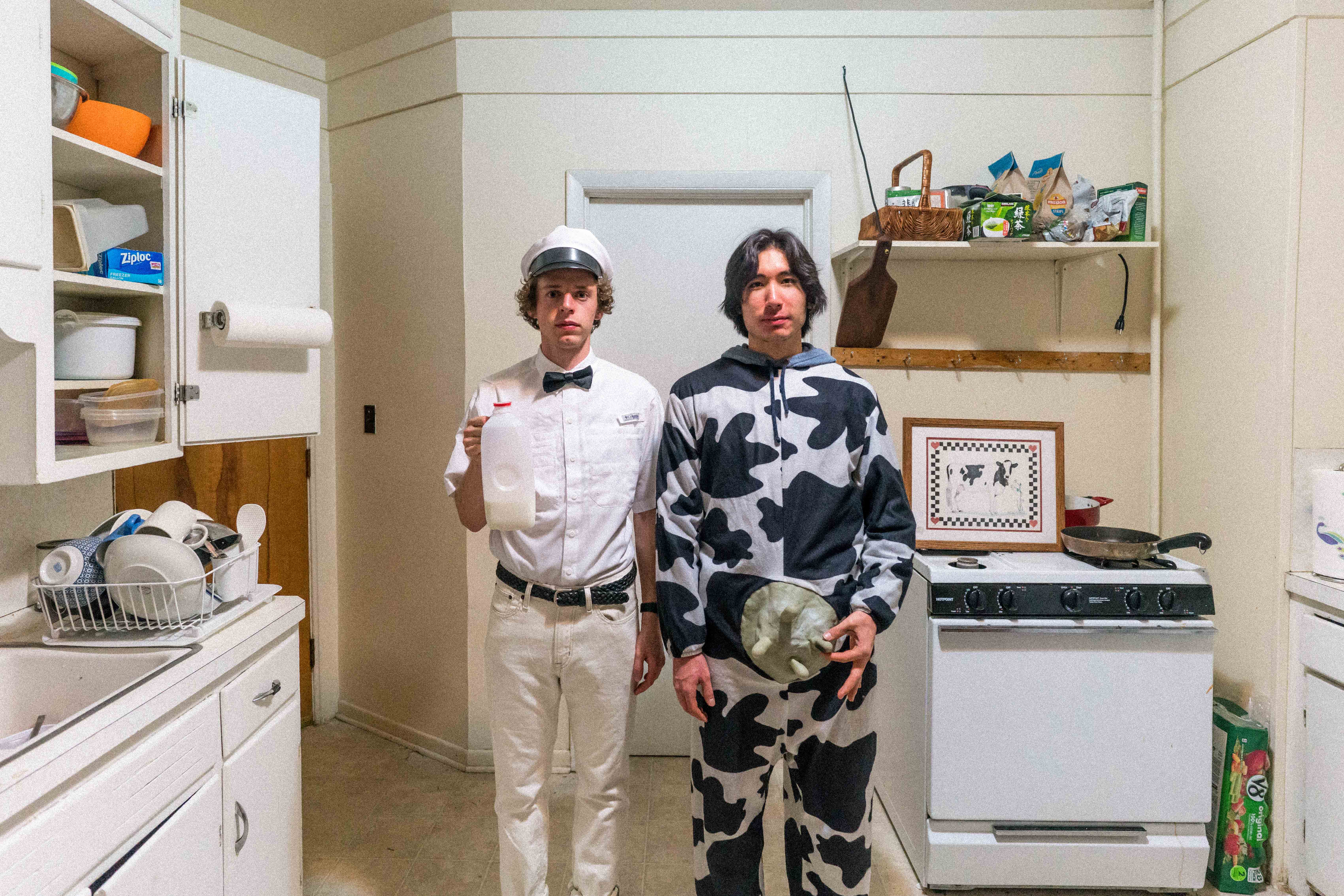 Dairy culture and Kim Jung-Un. They have more in common than you think — at least if you’re not consuming whole milk.

Richie Conway, guitarist and lead singer Sugar, and Matthew Norman, drummer and backup vocalist The Milkman, are the satirical, whole milk purists that take hot topics in pop culture and political commentary, and turn them into dairy metaphors for stereotypical Wisconsinites to comprehend.

The newest release by the UW graduates Sugar & The Milkman, “Skim Jung-Un (Won’t Pay the Rent)” centers on the North Korean dictator and his likeness, comparing him to those who not only won’t pay the rent, but prefer skim over whole milk.

The emphasis on how serious the duo takes whole milk over other drinks is blatant. When the pair sat down with The Badger Herald at The Plaza Tavern, Norman didn’t order the Spotted Cow as anticipated. Instead, he requested a tall glass of whole milk, presumably the Sassy Cow brand.

The shenanigans and the stunts are just as important as the milk. With all the seriousness in the music scene as of late, whatever wacky idea they come up with, they execute. Fans know that if they’re coming to see Sugar & The Milkman, they’re going to have to drink some milk.

The two find it most ironic that their thin physical appearance coincides with their constant enforcement of consuming dairy.

The whole milk loyalists come with half-gallons of milk, whole, of course, empty stomachs and cookies to enjoy mid-show. Conway and Norman seek to make their performances more interactive, getting the audience to become as involved in the whole milk movement as possible. Some come in cow costumes, like the one Richie sometimes performs in. Fans expect Milk chugging contests.

The group opens up to crowds with “We Drink Whole Milk,” the title being the only words you need to have the song memorized.

The two see themselves as missionaries, promoting the whole milk cause by preaching the good word. The milk messiahs believe the good word is whole.

“There’s a lot of bands in Wisconsin. But we’re a Wisconsin band,” Conway said.

Both Conway and Norman try to make every song different than from the one before and the one after.

“It’s like music for people with ADHD, we don’t give you a chance to get used to one section of the song. We’ll switch the rhythm or genre, throw some string cheese into the crowd,” Conway said.

The lens of milk allows Sugar & The Milkman to keep pushing the envelope on darker topics, but at the end of the day, it’s just about milk.

The bovine lovers aren’t limited to such controversial metaphors. Sugar & The Milkman have touched on heartbreaks such as loving the wrong girl, with lyrics such as “our hands first meeting milking the same cow.” The punchline is the woman drinks 2 percent. It’s a classic American story.

When it comes to almond milk, Conway was quick to raise a crucial point.

“Where’s the nipple? If there’s a nipple I’ll drink it,” Conway said.

Sugar & The Milkman fit into the community, but it’s quite liberating for the band to have a format where they can say what they want. In the name of satire, Conway and Norman are curious as to how far they can go.

They embody some of the same things they mock and criticize, as well as encouraging their fans to do the same. The pair’s Facebook page is full of humorous reviews, giving only one star to performances on the suspicion Conway and Norman may not have drunk whole milk during the concert. The ironic ratings are part of the collective experience that Norman particularly enjoys about being part of Sugar & The Milkman.

Sugar & The Milkman strive to give other people the chance to take away something from the show. It solidifies its place in history that way, Norman said.

“Our end goal is to be in a textbook in a school. We want at least a paragraph somewhere in a big thick textbook. Well, Chromebooks now, maybe get played in an elevator someday,” Conway said.

The creators of the theme song for the “UW Memes for Milk Chugging Teens” Facebook page leaked a future venue to The Badger Herald, Sugar & The Milkman will be opening for rising female-group Weaves at The Sett in the immediate future.

“Skim Jung-Un (Won’t Pay the Rent)” may not be trending on Spotify, but the pair is gathering impressive crowds at High Noon Saloon and The Frequency.