Courtesy of WUD Music

In a year defined by racial strife and the depressingly comical duel between Democratic and Republican presidential nominees Hillary Clinton and Donald Trump, respectively, it can only be expected that people will attempt to seek peace where they can find it.

For the organizers of PANGEA X-Pression Fest, this is their way of carving out a space for calm and love, in an otherwise hectic and cruel cultural landscape.

“You would hope you wouldn’t have to do PANGEA again,” said Devlin Brush, one of the people behind the Oct. 14 event in Madison. “Society shouldn’t require the need for events like this.”

Indeed, given the fact that the festival, which will play host to everyone and everything from hip-hop and spoken word performances to visual and textile artists was born because of hate, it would take a rather cold-hearted individual to disagree with Brush.

“[We] came together by osmosis,” said Martinez White, the creative mind behind the event, who originated the idea as a direct response to the Tony Robinson’s death in 2015.

Along with Wisconsin Union Directorate Music, they have been working hard on the festival since April, White said.

PANGEA, named after the prehistoric supercontinent, is intent on providing a free and comfortable environment of healing.

This is why the festival is named so — in the hopes of bringing people, especially young people, together through the power of varied interpretations of art to act as one sizable middle finger to the divisive powers that be.

As Brush said, “the healing power of art is not seen anywhere else in society.”

The festival’s aspirations, however, are just that — plural, not singular. Robinson’s death, along with movements like #TheRealUW and stories of oppression have, to an extent, informed and influenced the founders. 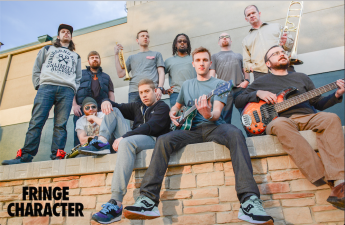 Fringe Character is poster child for musical outsidersThe worst kept secret in show business is that outsiders are intuitively built to thrive under the spotlight. They reach Read…

“I wasn’t directly involved with #TheRealUW, but I helped out a bit,” Adam Villegas, PANGEA creative director, said. “I broke down in tears at things that were said to minorities.”

It’s experiences like these that have driven the three University of Wisconsin students — two alumni and one undergraduate — to provide a space for youth to speak out and grapple with the oppressive experiences of their past. They are quick to emphasize, though, that PANGEA will welcome anyone who wants to be welcomed.

“We want to positively influence all colors of students,” Villegas said.

Perhaps this solidifies the aura of individuality surrounding the festival. But it would be prudent to note that individuality, while inspiring, can pit itself against togetherness. PANGEA, however, adds a sense of insolence in how it bucks the trend of pitting an individual against the larger group. It is this individuality that the organizers hope will lead to companionship with individuals from varying degrees of cultural, religious and racial strata.

While the concept of PANGEA is garnering praise, it is the need for such a concept that is so disquieting. The festival’s mission statement calls for young people in attendance to ignite the provocation of healing processes and ends with the statement, “We are the Legends Now!”

It has become commonplace for community and equality to be lost in societal struggles. So until instances of apparent oppression are not routine evening news stories, PANGEA will persist — as it should.

The three organizers only hope that they are not forced make PANGEA an annual fixture.