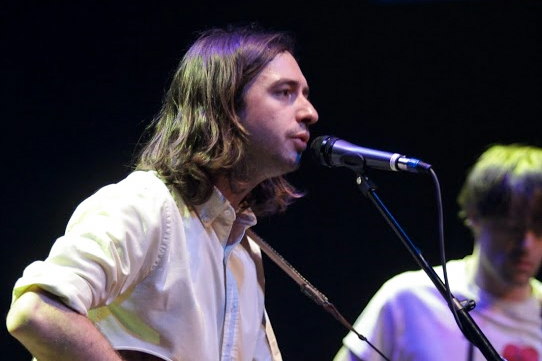 Before his show at the Sett on Saturday, I was able to sit down with Martin Courtney, frontman of New Jersey-based indie band Real Estate and recent solo artist, to talk about bagels in Wisconsin, his new record Many Moons and performing at college campuses.

The Badger Herald: Thanks so much for taking some time to do this interview, I really appreciate it.

Martin Courtney: No problem, especially for, you know, a Jersey guy.

(Interviewer’s note, we are from nearby towns in New Jersey.)

BH: Yeah, exactly. On that note, there are no good bagels here. It’s so hard, never being able to find a good one. 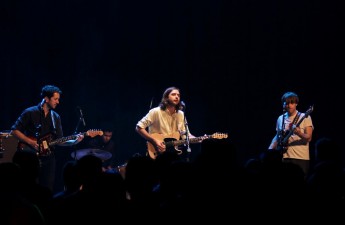 Martin Courtney solidifies new direction as humble solo artist with intimate, amiable energyIf there were any lingering doubts in the audience about Martin Courtney’s choice to branch out from his band Real Read…

MC: Tell me about it, I lived in New York for a while, and it’s just … Jersey bagels are the best.

HSW: They are! And people from New York City don’t understand that actually. But yeah, the closest bagel I can get to around here is an Einstein’s bagel.

MC: (laughs) Yeah, I would probably just give up.

BH: Yeah, I should probably just transfer, honestly. OK, to start the actual interview — did growing up in New Jersey influence you as you were developing as an artist in any way?

MC: I think so. Just, obviously, the experience of growing up [there] makes its way into the lyrics and things like that. I think there’s sort of a general vibe of New Jersey. Like there’s a lot of good bands from New Jersey like Yo La Tengo and The Feelies. There’s kind of this indie rock genre of music I like to think I’m trying to live up to in a way. I think being from New Jersey and being that there’s already those good bands from New Jersey, I already had an affinity for them because of that fact and also because they’re great. And then I guess that they’re, I’m sure, a huge influence on my music.

BH: Is Yo La Tengo in particular a big influence on your music?

MC: Yeah, I love that band.

BH: My dad, he’s been going to their Hanukkah shows in Hoboken for the past 12 years now, and he still hasn’t brought me.

BH: Oh, that’s right! They aren’t, I forgot about that.

BH: I guess I was in denial. Yeah, they’re a great band, though.

MC: We, my band, Real Estate, got to open one of those shows one of the last years [Yo La Tengo] did it. That’s one of the highlights of my musical career.

BH: They really are a good band. Anyway, I read up on some of your other interviews before and you kind of said that a lot of this solo work came out of almost default, or organically. But, as you were doing it, did you notice doing stuff by yourself was different than working with a group, or is it still a lot of the same process?

MS: This record was still made with a group, but just a different group. It was very much me and Jarvis, the guy who’s playing bass in the band tonight. He also recorded and mixed it, you know, produced the record and played bass and some guitar on it. So it’s officially a solo record, but it’s really the two of us that made this album. I just wrote the songs. And there were a couple different drummers, like Aaron who’s playing drums with me tonight played drums on most of the record, and then actually, weirdly enough, the drummer in EZTV [one of the opening bands], Michael, also played on the other songs on the record.

But before we would record the songs, we would spend a lot of time jamming them and getting the arrangements down so it was still a collaborative effort. It was just with a different group of people, so that changed the vibe of the songs for sure. I think knowing I was writing for different people, or knowing it was going to be played by different people, probably affected the songs a little bit in some way or another.

BH: Just speaking of the songs then, do you have a personal favorite out of the songs on the record, or are they all just your children and you can’t pick a favorite?

MC: From this album?

BH: Yeah from this album, as much as I wish we could talk about Real Estate stuff.

MC: (laughs) Yeah, I do have ones that I like more for sure. I think “Vestiges” is one of my favorites on the record, just because I like the way the recording turned out. It’s a really nice-sounding recording, and the lyrics, I find them to be interesting. That’s probably my favorite one on this record. Other ones have turned out to be really fun to play live, or different things. They kind of grow on you in different ways.

BH: As you perform the songs live, do they change for you?

MC: A little bit, in kind of really subtle ways. I might add a little thing on the guitar, change the vocal melody a little bit, or something like that.

BH: Actually, while we were trying to figure out how to set up this interview, I saw you talked with one of your fans for a bit and took a photo with him when you were grabbing your beer. Not that to say we were spying on you or anything. But along those lines, now that you are married and you have a kid, do you find you’re connecting with college audiences or young audiences in different ways now that you’ve kind of moved away from that world?

MC: No, I mean I feel like I’m older now. We started with Real Estate right after I graduated from college. I was 23 when we started that band. Early on when we played [at] colleges, it was like we were much closer in age to the people, the students. Now I’m 30. As the years have gone by, I definitely feel old now when I come to colleges for sure. But I don’t feel any different talking [to people], it’s always super nice to have somebody tell you they like your music. It’s always an honor, it doesn’t matter who it is, or who it’s coming from. So yeah, I do like playing shows and having people come to see the music.

I’m glad, I didn’t know what to expect from this show and I’m glad to see people here. I didn’t know whether it’d be people who don’t necessarily know who we are, but it seems like there’s at least a couple people who know the record — it should be good.